Europe locks down over virus, Trump warns of months-long fight

The Times of Earth, International Edition
0
826 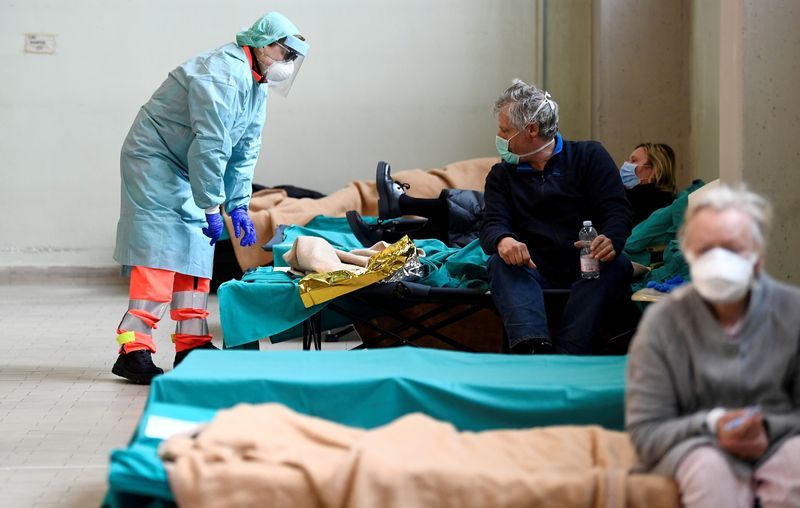 France was ordered into lockdown Monday as Europe closed its borders in the latest drastic attempt to combat the coronavirus pandemic, as President Donald Trump said the United States was readying for a month-long fight ahead.

Hours earlier, the leaders of the G7 industrial powerhouses had pledged to join forces to halt the economic freefall in the wake of the virus outbreak, calling it “a human tragedy.”

In a somber 20-minute address in which he described the crisis as a “war,” President Emmanuel Macron ordered the French to stay at home for 15 days starting midday Tuesday, banning all non-essential trips or social contacts and warning violations would be “punished.”

Macron said the European Union’s external borders would close for 30 days starting Tuesday, as the number of deaths worldwide passed 7,000. More than 175,530 cases have been recorded in 145 countries.-

With the virus spreading rapidly in Europe, France joined Italy and Spain in imposing restrictions rarely seen outside wartime — while dozens of countries have closed borders, ordered curfews and banned most public events.

Spain and Russia sealed off their borders Monday while Germany severely restricted crossings.

Across the Atlantic, where similar extreme measures are multiplying, Trump said he was asking Americans to restrict gatherings to groups of fewer than 10 people — as New York and the capital Washington stood largely deserted.

The US leader, who has struggled to convince he is taking the full measure of the crisis, told Americans to be prepared for a months-long struggle against the pandemic.

“If we do a really good job… people are talking about July, August,” he told reporters at a now-daily briefing of the White House task force on the pandemic, saying he might ask the military to help build temporary hospitals to tackle rising numbers of sick.

He also acknowledged the United States “may be” heading into a recession due to the virus.

Leaders of the world’s richest countries held an emergency videoconference to coordinate their response as COVID-19 races across borders, crippling economies and threatening mass casualties.

“The COVID-19 pandemic is a human tragedy and a global health crisis, which also poses major risks for the world economy,” a joint statement from Britain, Canada, France, Germany, Italy, Japan and the United States said.

“We resolve to coordinate measures and do whatever it takes, using all policy tools, to achieve strong growth in the G7 economies and to safeguard against downside risks.”

The head of the World Health Organization called for every suspected coronavirus case to be tested, something which would send the known tally of the sick sky rocketing.

Tedros said more cases and deaths have now been reported in the rest of the world than in China, where COVID-19 first emerged in December before crisscrossing the globe.

Italy — the hardest hit nation in Europe — announced another surge in deaths, taking its overall toll to more than 2,000.

Escalating its response, Britain called for an end to all “non-essential” contact and travel, while Switzerland declared a state of emergency.

Germany banned gatherings in churches, mosques and synagogues and said playgrounds and non-essential shops would close.

In India, the Taj Mahal was closed to visitors. The world’s second most populous country has already shut most schools and entertainment facilities.

Iran, the country with the highest number of infections and deaths in the Middle East, closed four key Shiite pilgrimage sites.

And Canada also closed its borders to foreigners, except Americans for now.

Governments are scrambling to contain economic fallout, with fears it will catapult the world into recession.

The EU will also hold a summit on Tuesday, set to discuss the 27-nation bloc’s next response to the virus.

In the United States, the Federal Reserve sought again to shore up the economy, announcing another $500 billion in cash injections after slashing its key interest rate to virtually zero.

But stock markets and oil prices went into freefall again as the various central bank moves failed to lift confidence.

And European car makers including Fiat Chrysler and Peugeot began shutting down their factories.

Around the world people are having to contend with disruption to almost every aspect of daily life.

There was pandemonium at airports as travelers scrambled to get home with countries increasingly slamming shut their borders to prevent the virus spreading.

There is growing opposition to holding the Olympics as planned this summer, and there are also doubts about the European football championships set to take place in 12 countries this summer.

Italians over 80 ‘will be left to die’ as country overwhelmed by ...