The Times of Earth, International Edition
0
589 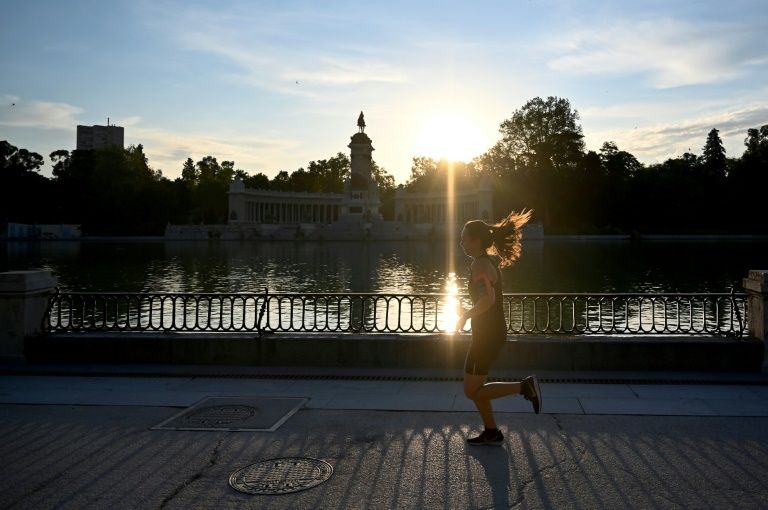 Parks, gyms and swimming pools reopened in Spain, as the country emerges from one of the world's toughest lockdowns (AFP Photo/Gabriel BOUYS)

Europeans flocked to parks, gyms and pools on Monday as more countries eased coronavirus restrictions, while Japan lifted its state of emergency but urged vigilance to avoid another wave of infections.

However, the United States has banned travellers from Brazil as South America becomes the latest hotspot for a virus that has already infected more than 5.4 million people worldwide and killed almost 350,000.

And hopes that anti-malaria drug hydroxychloroquine could be used as a potential treatment for the virus were quashed as the World Health Organization halted clinical trials “while the safety is reviewed”.

With the global economy battered, governments are scrambling to provide relief to businesses and citizens wearying of mass confinement.

In hard-hit Spain, Madrid and Barcelona cautiously emerged from one of the world’s strictest lockdowns with parks and cafe terraces open for the first time in more than two months.

Hundreds of people flooded Madrid’s famous Retiro Park to enjoy a stroll or a jog in the sunshine.

“The reopening of Retiro brings me a feeling of serenity, gives me comfort,” said Rosa San Jose, a 50-year-old schoolteacher.

In other parts of Spain, beaches reopened with strict guidelines for social distancing.

The Spanish government also announced that it would scrap quarantine for foreign arrivals from July 1, in the hope of helping the battered tourism sector.

As gyms and swimming pools reopened in Germany, Iceland, Italy and Spain, slowing infection rates in Greece allowed restaurants to resume business a week ahead of schedule — but only for outdoor service.

“The cafe in Greece has a social dimension, it’s where the heart of the district beats.”

But not all the news from Europe was encouraging.

Sweden, which has gained international attention for not enforcing stay-at-home measures, saw its COVID-19 death toll pass 4,000, a much higher figure than its neighbours.

And Dutch officials announced a second worker may have been infected at a mink farm before it was known that the animals were carrying the virus.

In Asia, Japanese Prime Minister Shinzo Abe ended a nationwide state of emergency after new cases slowed to a crawl.

The move will help the world’s third-largest economy to gradually pick up speed again, but Abe urged citizens to remain cautious.

“If we lower our guard, the infection will spread very rapidly… we need to be vigilant,” he said.

He urged people to adopt a “new lifestyle” and continue to avoid the “three Cs” — closed spaces, crowded places and close contact.

Mongolia on the other vowed to stick with its lockdown until a vaccine is found. The country, wedged between Russia and China, was one of the first to shut its borders when the pandemic erupted.

The pandemic may be under control in many parts of the world, but in Brazil it shows no sign of slowing.

The world’s sixth-largest country has now recorded 22,600 deaths, even as far-right President Jair Bolsonaro continues to play down the threat.

He flouted social distancing rules again on Sunday, attending a rally outside the presidential palace in Brasilia, ditching his face mask, shaking hands and even hoisting a young boy on to his shoulders.

The White House said on Sunday it would bar entry into the US of non-Americans who have been in Brazil in the previous 14 days — despite Bolsonaro being a close ally of President Donald Trump.

The US president meanwhile played golf for a second straight day on Sunday, even as his country fast approached the grim milestone of 100,000 deaths.

He has also threatened to pull the Republican National Convention out of North Carolina in protest at the state’s slow lifting of virus restrictions.

When and how to exit lockdowns has divided Americans — some seeing the restrictions as an infringement of their liberties.

Despite experts warning against reopening too soon, and recommending some form of confinement measures until a vaccine or treatment is developed, governments are feeling immense pressure to ease lockdowns.

India — which has imposed the world’s biggest lockdown — resumed domestic flights on Monday with the government desperate to get Asia’s third-largest economy moving again.

But infections are still surging in India, and one airline employee said she and many other colleagues felt “very nervous” about starting work again.

In Germany, Chancellor Angela Merkel was locked in a power struggle with two states eager to ditch most coronavirus restrictions.

The federal government however wants to extend distancing regulations until at least July 5.

A political scandal raged on in Britain where Prime Minister Boris Johnson defied pressure to sack his top aide Dominic Cummings, who has been accused of breaching the government’s own lockdown rules in March and April.

Cummings insisted Monday he had behaved “reasonably and legally” despite a chorus of criticism from politicians of all stripes and even from scientists.

“If you give the impression there’s one rule for them and one rule for us, you fatally undermine that sense of ‘we’re all in this together’,” scientific adviser Stephen Reicher warned in an interview.