The Times of Earth, International Edition
0
536 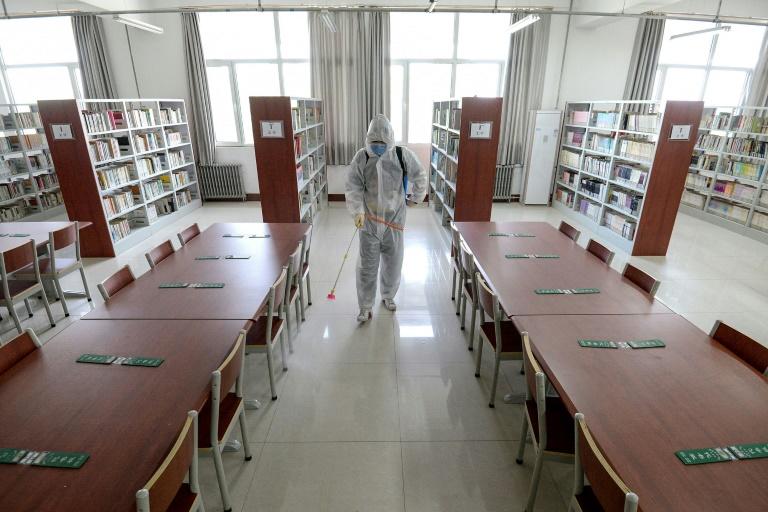 Kids were allowed back to school in some Chinese cities, though authorities took sanitary precautions (AFP Photo/STR)

Europe took uneven steps to phase out coronavirus restrictions Monday as debates rage over how quickly to ease lockdowns that are protecting lives but piling on economic misery.

While schools and shops reopened in some parts of the continent, British Prime Minister Boris Johnson emerged after his own battle with the virus to call for patience in the UK, saying it was too early to follow suit.

Around the world the pandemic has killed over 206,000 people and infected nearly three million, with death tolls highest in the United States.

Well over half of all deaths are in Europe, with the toll hitting 125,000 on the continent Monday.

Yet with some of Europe’s worst-affected countries recently reporting marked drops in their daily death counts, governments are exploring how to relax confinement orders that are taking their own economic and psychological tolls.

Italy, the first European country to go into lockdown seven weeks ago, has laid out partial reopening plans to start on May 4 while Spain and France are expected to announce their timelines on Tuesday.

In Switzerland, Croatia and Serbia, many small shops were back in business Monday, while children in Norway returned to primary school.

With the UK starting “turn the tide” of an outbreak that has killed more than 20,000, Prime Minister Johnson warned against any hasty moves.

Looking thinner and with his blond mane a bit longer after his hospital stay, the 55-year-old said he could not “throw away all the effort and the sacrifice of the British people and to risk a second major outbreak”.

Responses varied elsewhere on the planet as leaders grapple with how to balance public safety with personal freedoms and economic relief.

Forecasts warn of the worst global recession in a century, with oil prices tumbling and the travel and tourism sector badly hammered.

In the US, states are moving at different clips to roll back confinement measures that have wiped out tens of millions of jobs.

While New York Governor Andrew Cuomo sketched plans to resume some manufacturing and construction activity in low-risk parts of the state on May 15, other conservative-led US states are speeding up the timeline.

Rejecting the advice of health experts, Georgia has allowed thousands of businesses to resume operations, and Oklahoma will let restaurants and cinemas reopen from May.

Plans to ease restrictions have been met with both fear and impatience from citizens facing a deeply uncertain future.

While some parents in Norway expressed anxiety about sending kids back to school, Catholic bishops in Italy are angry about an extended ban on masses.

Cabin fever got to some Parisians who were out enjoying sunny weather over the weekend, with walkers and joggers crowding paths despite strict social distancing orders.

Starting Monday, masks became obligatory on public transport and in most shops in Germany, a measure residents described as both necessary and irksome.

“It’s warm, slippery, you can’t breathe well, but if it’s to avoid infection, I’m fine with it,” Emil, a commuter at a Berlin train station, told AFP.

In Switzerland, relieved hairdressers, florists, dentists and others went back to work after a range of businesses reopened in the first stage of the country’s three-phase plan.

“I’m delighted that we’re starting up again. If we don’t work, things are dead,” hairdresser Anita Ayma said in Geneva, wearing a fabric mask and plastic face shield has she worked through a 12-hour string of bookings.

“We have won that battle,” she said.

And China, which has touted its success in reining the outbreak that started on its soil, sent tens of thousands of high school students back to school in Beijing and Shanghai after months of closures.

But school life wasn’t quite back to normal, with smaller classes, temperature checks, strict social distancing, and no physical education.

As scientists race to develop treatments and eventually a vaccine for the virus, experiments are underway to figure out how to resume some aspects of ordinarily life with minimal risk.

Several countries plan to introduce virus tracing apps to alert users if they are near someone who has tested positive — technology already downloaded by nearly two million Australians, despite privacy concerns.

In Italy, Prime Minister Giuseppe Conte warned that people would have to wear face masks in public places and rigorously observe social distancing measures when the current restrictions are lifted next week.

Cultural norms like hugs and handshakes will also be discouraged as Italy enters an era “of responsibility and coexistence with the virus”, Conte told the nation.

In New York, Governor Cuomo raised the possibility of resuming major-league sports competitions — without stadium audiences — to help ease the boredom of fans in confinement.

Meanwhile, millions of Muslims around the world are adjusting to a unusual Ramadan without the mass prayers in mosques or large family meals that normally frame the daily fasting.

Saudi Arabia partially lifted its curfew, but said it would maintain a round-the-clock lockdown in the holy city of Mecca.

Some countries employed creative tactics to ensure the rules were followed.

Authorities in Madagascar introduced a new punishment to enforce orders to wear masks outside: those caught bare-faced will be forced to sweep pavements in the African island-nation.

On the first day of enforcement, some 500 people were penalised and 25 were immediately sentenced to sweep dusty streets in the capital Antananarivo.