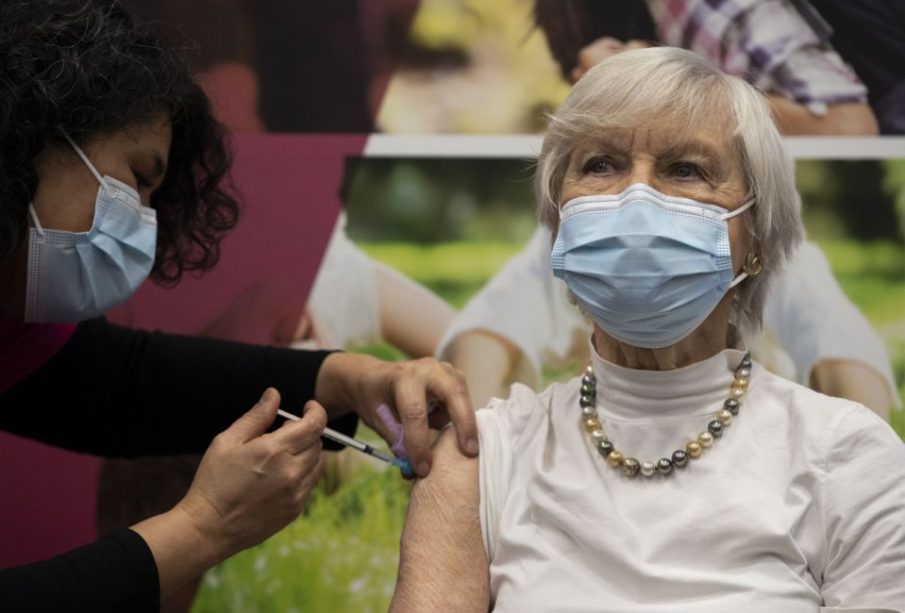 The European Union on Tuesday warned pharmaceutical giants that have developed coronavirus vaccines with EU aid that it must get its shots on schedule, a day after the bloc threatened to impose export controls on vaccines produced within its borders.

The EU made it very clear that it is bent on getting all doses as quickly as their contracts provide for at a time when infections are surging, many hospitals are overwhelmed, and many of the 27 members states are struggling to get their vaccine rollout going at top speed.

The hardening of its position came days after it accused AstraZeneca of failing to guarantee the delivery of coronavirus vaccines without a valid explanation. It also had expressed displeasure over vaccine delivery delays from Pfizer-BioNTech. The Pfizer vaccine is already being rolled out in the EU, and the AstraZeneca one is expected to be approved this week.

The EU, which invested 2.7 billion euros in vaccine research and production for the drug companies, “means business,” she added, reflecting the heavy pressure EU nations are under to roll out vaccines.

The EU has committed to buying 300 million AstraZeneca doses with option on 100 million extra shots. Late last week, the company said it was planning to reduce a first contingent of 80 million to 31 million. Pfizer has said it was delaying deliveries to Europe and Canada while it upgrades its plant in Belgium to increase production capacity.

And after two meetings and phone calls the level of distrust that has only grown between the EU and the Anglo-Swedish giant. “We see that doses are being delivered elsewhere and we know that we have signed an agreement,” said Commission spokesman Eric Mamer.

That’s why the EU is preparing a system of strict export controls on all coronavirus vaccines produced in the bloc — raising the specter that it could prevent the doses from going to countries outside of the EU until its own orders are fulfilled. The commission insists it is basically to monitor whether companies respect their commitments to the EU.

Critics say it could lead to a ban on exports while the EU receives its full allotment. Both AstraZeneca and Pfizer have vaccines made in the EU.

The biggest EU member state was firmly behind von der Leyen’s view — and batted away any suggestion the EU was looking for special treatment.

“With a complex process such as vaccine production, I can understand if there are production problems — but then it must affect everyone fairly and equally,” German Health Minister Jens Spahn told ZDF television. “This is not about EU first, it’s about Europe’s fair share.”

The EU, which has 450 million citizens and the economic and political clout of the world’s biggest trading bloc, is lagging badly behind countries like Israel and Britain in rolling out coronavirus vaccine shots for its health care workers and most vulnerable people. That’s despite having over 400,000 confirmed virus deaths since the pandemic began.

The slow rollout, however, is hardly only the result of vaccine production issues. France’s rollout was delayed by logistical and administrative problems, including lengthy bureaucratic consent rules designed to allay fears of what authorities believed to be an unusually large number of French vaccine skeptics.

The Netherlands had to scramble to get ready for the hard-to-handle Pfizer-BioNTech vaccine with its requirement for deep freezing. While about 10% of the U.K. population has gotten at least one dose, that figure hovers around 2% overall or lower in a great many EU nations.

Still, the delays in getting vaccines will be make it harder to meet early targets in the EU’s goal of vaccinating 70% of its adults by late summer. French Health Minister Olivier Veran said slow delivery could affect the whole chain. If the calendar is not respected, he said, “then it can change the game.”

The European Medicines Agency is scheduled to review the Oxford-AstraZeneca coronavirus vaccine Friday and its approval is hotly anticipated. The AstraZeneca vaccine is already being used in Britain and has been approved for emergency use by half a dozen countries, including India, Pakistan, Argentina and Mexico.

The EU has signed six vaccine contracts for more than 2 billion doses, but only the Pfizer-BioNTech and Moderna vaccines have been approved for use so far.