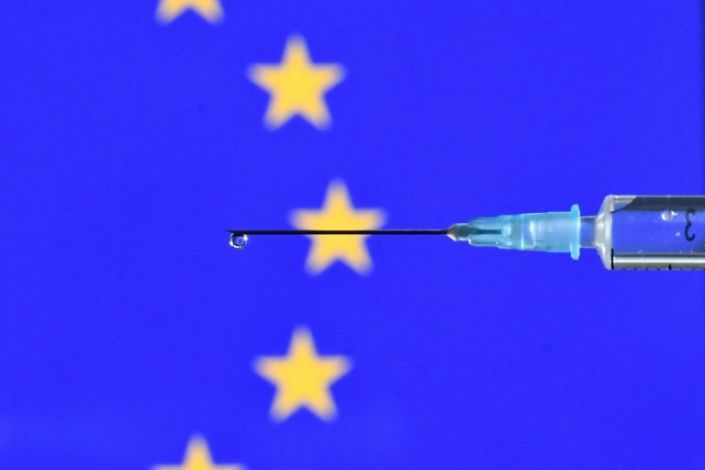 The EU says it will start Covid-19 inoculations on December 27 providing the EMA grants a one-year conditional marketing authorisation. AFP

The European Union on Monday gave official approval for the coronavirus vaccine developed by BioNTech and Pfizer to be used across the 27-nation bloc, raising hopes that countries can begin administering the first shots to their citizens shortly after Christmas.

The EU’s executive commission gave the green light just hours after the European Medicines Agency said the vaccine meets safety and quality standards. Brussels had been expected to take two or three days to endorse the market authorization move.

“As we have promised, this vaccine will be available for all EU countries at the same time, on the same conditions,” said European Commission President Ursula von der Leyen. “This is a very good way to end this difficult year, and to finally start turning the page on COVID-19.”

Deliveries of the vaccine had been penciled in to start this coming Saturday, with inoculations beginning across the EU between Dec. 27-29, she said.

The same vaccine was authorized in Britain and the United States weeks ago, prompting pressure from EU governments for EMA to speed up its approval process as virus cases surged again across the continent.

EMA originally set Dec. 29 as the date for evaluating the vaccine, but moved up the meeting to Monday after calls from the German government and others for the agency to move more quickly.

Harald Enzmann, the head of EMA’s expert committee, dismissed any suggestion that political influence had affected the decision.

“The focus was exclusively on the science,” he told reporters. “That was a scientific assessment, full stop.”

The Amsterdam-based EMA is responsible for approving all new drugs and vaccines across the 27 EU member states, Iceland, Liechtenstein and Norway. It is roughly equivalent to the U.S. Food and Drug Administration.

The vaccine has already been given some form of regulatory authorization in at least 15 countries.

Britain, Canada and the U.S. authorized the vaccine to be used according to emergency provisions, meaning the shot is an unlicensed product whose temporary use is justified by the pandemic that has killed almost 1.7 million people worldwide, according to a tally by Johns Hopkins University.

Switzerland became the first country Saturday to authorize the vaccine according to the normal licensing procedure. EMA’s conditional market authorization also followed the regular process, only on an accelerated schedule and under the condition that the pharmaceutical companies submit follow-up data on their vaccine for the next year.

While many have clamored for the vaccine’s authorization, there have also been concerns, in Europe and elsewhere, about the speed with which the shot was developed. Normally, vaccines take years to develop and approve, not months.

In a statement last week that appeared to address those concerns, the agency stressed that the vaccine would only be approved after a scientific assessment showed its overall benefits outweighed the risks.

Scientists are still waiting for more long-term follow-up data to see how long immunity from the vaccine lasts and if there are any rare or serious side effects. Final testing of the vaccine is still ongoing, and more information on whether the shot works in children is needed. EMA experts also said that data on pregnant women is limited, and physicians should decide on a case-by-case basis.

The vaccine is not made with the coronavirus itself, meaning there’s no chance anyone could catch it from the shots. Instead, the vaccine contains a piece of genetic code that trains the immune system to recognize the spiked protein on the surface of the virus.

On the day Britain began its vaccination campaign, authorities warned people with severe allergies not to get the shot after two people suffered serious allergic reactions; it’s unclear if the reactions were caused by the vaccine.

The U.S. Centers for Disease Control and Prevention said that as of Friday there had been six cases of severe allergic reaction in the U.S. out of more than a quarter-million shots of the BioNTech-Pfizer vaccine given, including in one person with a history of vaccination reactions.

Adding to an already grisly toll were concerns over a newly identified strain that appears to spread more easily. But experts expressed confidence that the new vaccine would still be effective against it.

“At the moment, we can say that there is no evidence to suggest that the vaccine will not work against the new variant of the coronavirus,” Emer Cooke, the head of the drug regulator, said after a closed-door meeting in which experts unanimously recommended the shot for people over 16.

But she added that protective measures such as wearing masks, washing hands and social distancing would likely be needed for some time.

“Vaccines alone will not be the silver bullet that will allow us to return to normal life,” said Cooke. “But the authorization of this first vaccine is definitely a major step in the right direction and an indication that 2021 can be brighter than 2020.”

The EU has ordered 300 million doses of the BioNTech-Pfizer vaccine; two are needed for each person, meaning other shots will be required to immunize all of the bloc’s nearly 450 million inhabitants.

The EMA plans to hold a meeting on Jan. 6 to decide if another vaccine made by Moderna should be licensed. It has reviews ongoing for a shot developed by Oxford University and AstraZeneca and another from Janssen, but neither of those have made a formal request for the EMA to approve their vaccine.

“Today is a particularly personal and emotional day for us at BioNTech,” said Ugur Sahin, the Germany-based company’s chief executive and co-founder. “Being in the heart of the EU, we are thrilled to be one step closer to potentially delivering the first vaccine in Europe to help combat this devastating pandemic.”