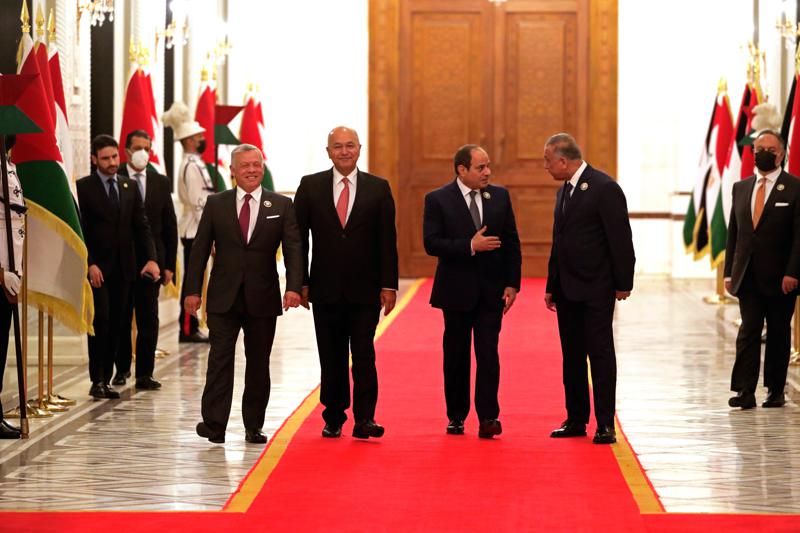 The first Gulf War ruptured diplomatic relations between Iraq and Egypt, but these have improved in recent years with many senior officials from both countries exchanging visits.

The United States has been urging Iraq to boost ties with Arab nations to counter Iran’s influence and Sisi’s visit is for a third round of talks between Egypt, Jordan and Iraq aimed at closer security, economic, trade and investment cooperation.

In recent years, Iraq had signed cooperation deals in the energy, health and education sectors with both countries.

On Sunday, the three leaders discussed several areas of regional interest, including the recent development on the Palestinian issue, combating terrorism and economic cooperation, an Egypt presidency statement said.

“The leaders stressed the need to intensify consultation and coordination between the three countries on the most important regional issues,” it added.

Kadhimi, Sisi and Abdullah held a summit in Amman last year and were due to hold another in Baghdad in April, but this was delayed after a deadly train crash in Egypt.

Egypt signed 15 deals and memoranda of understanding in sectors including oil, roads, housing, construction and trade in February after Iraq’s cabinet in December approved renewing its contract to supply the Egyptian General Petroleum Corporation (EGPC) with 12 million barrels of Basra light crude for 2021.

Iraq is also planning to build a pipeline that is meant to export 1 million barrels per day of Iraqi crude from the southern city of Basra to Jordan’s Red Sea port of Aqaba.

“There is genuine economic benefits that come from the “Arab Alliance” for all three partners, notably on energy diplomacy,” Hafsa Halawa, non-resident scholar at the Middle East Institute, said, adding that there was an expectation that stronger relationships could reinvigorate U.S. engagement in the region.

“The hope remains that certain aspects of this alliance can pull Iraq slightly out of Iran’s orbit of influence, but not by rushing back into U.S. arms and falling into the binary of being stuck between Washington and Tehran,” she added.