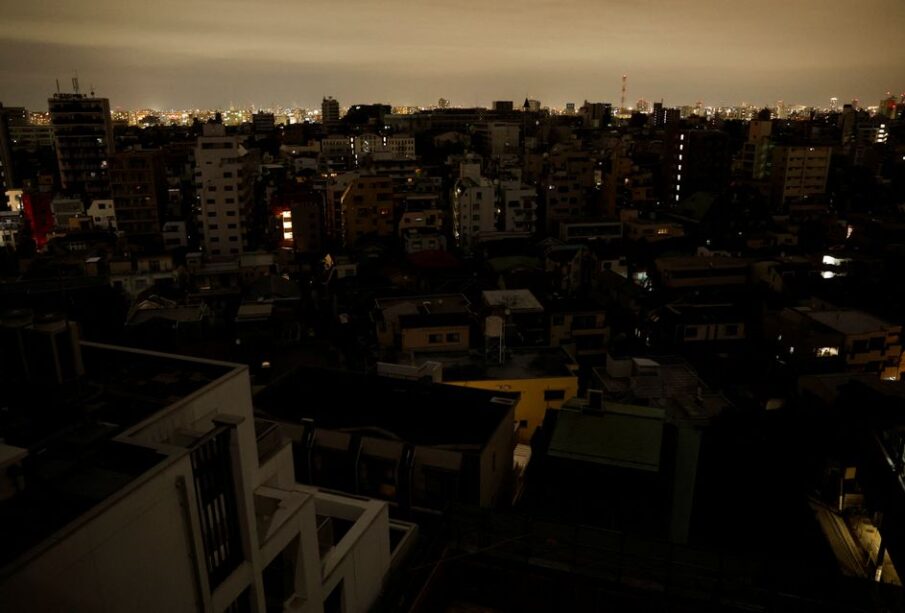 Houses and buildings are seen in an electric stoppage at the area after an earthquake at Toshima ward in Tokyo, Japan March 17, 2022. REUTERS/Issei Kato

A powerful earthquake with a magnitude of 7.3 jolted Japan’s northeast coast on Wednesday, shaking buildings as far away as Tokyo where it left hundreds of thousands without power, and reviving memories of a devastating quake 11 years earlier.

The tremor hit off the coast of Fukushima prefecture, some 275 kilometres (170 miles) northeast of Tokyo and at a depth of 60 kilometres, the Japan Meteorological Agency (JMA) said.

It triggered a fire alarm at a turbine at the crippled Fukushima Daiichi plant, authorities said, adding that they were checking the situation. That plant was devastated by a magnitude 9 earthquake and following tsunami in March 2011.

Authorities issued a tsunami warning for the region of as high as 1 metre (3.3 ft), with public broadcaster NHK reporting waves of 20 centimetres (8 inches) in some places.

Prime Minister Fumio Kishida told reporters his government was assessing the extent of any damage.

Tokyo Electric Power Company (9501.T) said that around 2 million households were without power, including 700,000 in the capital, and that it was checking the condition of reactors at Fukushima and other plants, public broadcaster NHK reported.

No damage has yet been reported at those or at oil refineries on the coast, government officials said.

In 2011, the radiation leak from the Fukushima Daiichi nuclear power plant was the worst nuclear crisis since the explosion at the Chernobyl facility in Ukraine a quarter of a century earlier.

Sitting on the boundary of several tectonic plates, Japan experiences around a fifth of the world’s earthquakes of magnitude 6 or greater.

Both sides in Russia-Ukraine conflict talk of compromise