Dying lands: Farmers fight to save the ‘skin of the Earth’ 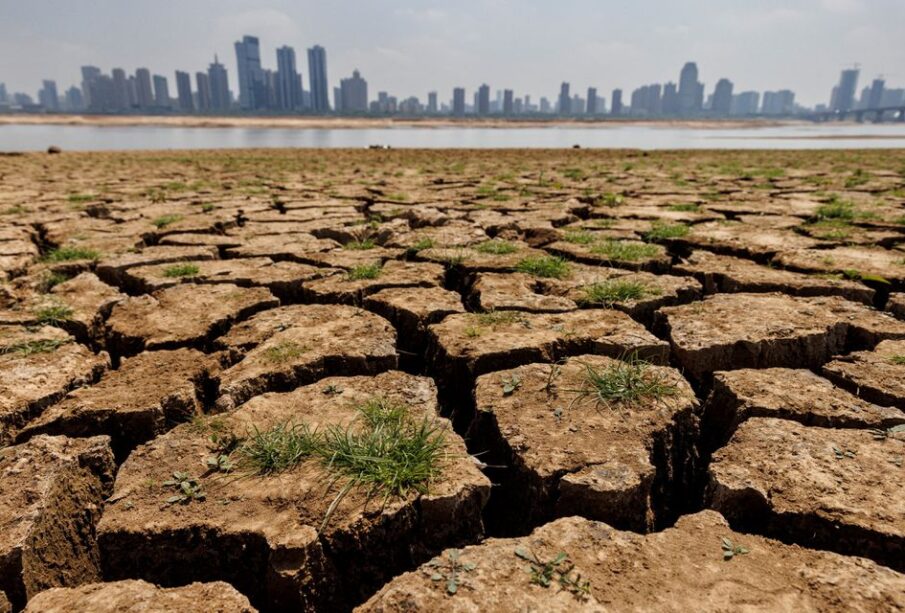 Cracks run through the partially dried-up river bed of the Gan River, a tributary to Poyang Lake during a regional drought in Nanchang, Jiangxi Province, China, August 28, 2022. REUTERS/Thomas Peter/File Photo

In America’s dusty Corn Belt this spring, the land was drowning. In China’s Yangtze river basin, it’s bone dry. Farmers in both are fighting a losing battle to save the soil that produces our food.

Carolyn Olson figures she did everything she could to protect her 1,100-acre farm near Cottonwood, Minnesota. She grows three-foot-high tall-grass buffer strips around her fields to protect the soil and in winter plants crops to provide ground cover.

But torrid rainstorms in May washed away so much soil during planting season that she expects the crop to suffer.

“When you get that much rain, almost four inches in about an hour, even your best practices fly out the window,” said the 55-year-old, whose farm has been in her husband’s family since 1913.

By contrast, there’s not enough water in the vast Yangtze basin, which produces a third of China’s crops. Scientists are resorting to firing rockets into clouds to “seed” them with rain artificially in the hope of replenishing soil drained of nutrients by sizzling temperatures.

It’s no silver bullet, though.

From the United States and China to Kenya, human efforts to preserve soil are proving no match for increasingly extreme weather, which is damaging the living system and depleting its ability to produce food, according to Reuters interviews with dozens of farmers, scientists and other soil specialists.

Soil erosion could lead to a 10% loss in global crop production by 2050, according to the UN’s Food and Agriculture Organization (FAO). With the world’s population forecast to rise by a fifth to nearly 10 billion by then, malnutrition and famine is set to affect more and more people.

Few places are in deeper crisis than the pasturelands of northern Kenya, where ever-deepening drought has denuded the land of vegetation, exposing the soil to damage and confounding efforts to adapt farming methods.

“The soil left there is very vulnerable, like the skin of the Earth … you’re not wearing clothing when the sun’s beating down,” said Leigh Ann Winowiecki, a Nairobi soil scientist at CIFOR-ICRAF, a research center on the benefits of trees for people and landscapes.

U.N. scientists say it can take up to 1,000 years for nature to produce 2-3 cm of soil, making preservation critical.

Plants grow by absorbing sunlight and carbon dioxide. They cycle the carbon into the soil, feeding microorganisms that in turn create the conditions for more plants to grow.

Extreme weather, some of it caused by climate change, not only damages crops but also erodes the soil and depletes nutrients such as carbon, nitrogen and phosphorus from the complex ecosystem, according to specialists.

This leads to land degradation – the decline of its ability to sustain plant life, and by extension animal and human life.

One-third of the world’s total land area is already degraded by erosion, nutrient depletion or in other ways, according to the United Nations.

Ronald Vargas, a soil scientist and secretary of the FAO’s Global Soil Partnership, said extreme weather was accelerating soil degradation already set in train by deforestation, over-grazing by livestock and improper use of fertilizer.

“Land degradation is a vicious cycle. Once you have degraded soils, and you have these bad (weather) events, then you have very bad second consequences,” Vargas said.

On the FAO’s projected loss in global crop production, he added: “This 10% represents a real issue to food security.”

The American Midwest, parched for rain this summer, is actually getting wetter over time.

Rainstorms over three days in mid-May washed away up to three tonnes of dirt per acre in two dozen Minnesota counties, according to data from the Daily Erosion Project, an Iowa State University initiative to estimate soil loss.

Rachel Schattman, assistant professor of sustainable agriculture at the University of Maine, said the U.S. Midwest and Northeast were especially vulnerable to land erosion because they were receiving more extreme amounts of rain than normal, a trend expected to continue through the end of the century.

In the Yangtze river basin, wetter weather would be welcome. Farming belts in the region, stretching from Sichuan in the southwest to Shanghai on the east coast, received 40% less rainfall than normal over the summer and baked in record-high temperatures.

Liu Zhiyu, an official at the Chinese water ministry, said in August that a third of the soil in six key farming provinces along the upper and middle reaches of the Yangtze” was drier than is optimal as a result of the drought. In around a tenth of the rural counties in those provinces, soil was suffering from “severe water depletion”.

“Artificial rainfall can only be the icing on the cake,” Zhao Zhiqiang, vice-director of China’s weather modification office, said at a media briefing in September. He did not say whether the operations were successful.

Similarly, other measures such as digging thousands of new wells and encouraging farmers to switch crops to boost yields have limited impact.

Farmers around the shrunken Poyang Lake in Jiangxi province told Reuters that all kinds of crops were severely underdeveloped as a result of the lack of rainfall. Hu Baolin, a 70-year-old from Xinyao village, said his rapeseed hadn’t even flowered, and his pomelo fruit was a third of its usual size.

In the farming district of Hukou in Jiangxi, many sesame, corn, sweet potato and cotton plantations have dried up, said a 72-year-old resident who only gave his surname Chen as he picked over a baked field for rice to take home to feed his chickens.

Some experts are optimistic that the world can step back from peril, in some places at least.

The FAO drafted an action plan this year that seeks to improve and maintain the health of 50% of global soils by 2030, adopting practices like crop rotation and agroforestry, a land-use system that plants trees in and around crop and pastureland.

“We always think something new is going to save us,” Morgan said. “But we really just need to change our behavior.”

Options include not tilling soil to reduce erosion, and planting off-season cover crops to prevent erosion and nutrient loss. The practices are only used on 25% and 4% of U.S. farm acres respectively, according to estimates from BMO Capital Markets, which said that overhauling growing systems created up-front costs for farmers, with yield losses in early years.

In Kenya, though, the damage is dire.

“The soil never used to be this sandy when I was young,” said Maliyan Lekopir, 50, a cattle and goat farmer in the Samburu region, kicking dirt up in the air.

“This place used to be so beautiful. Giraffes, zebras, gazelle used to graze next to our goats. Now all the animals are gone and the streams have dried up.”

Indeed the land is desiccated in the country, where prolonged droughts have become more common since 2000, with the current one the worst in four decades.

More than 60% of the country’s total land is deemed highly degraded, and more than 27% very highly degraded, according to Kenya’s environment ministry, taking into account factors such as vegetation cover and its ability to resist erosion. This is despite efforts by green groups encourage farmers to use no-till or minimum-till agriculture and employ agroforestry.

None of the children playing in Lekopir’s village in northern Kenya remember a real rainy season. They’ve grown used to raising camels and dodging the growing web of dusty gullies, none of which were present during Lekopir’s youth.

The drought has made the water sources this village relies on increasingly stagnant, making kids sicker, Lekopir said. To keep the remaining cattle and goats alive, herders often have to walk hundreds of miles in search of water or pasture.

Grass has disappeared from much of Kenya’s vast pastures, leaving the land prone to future compaction or erosion, said soil scientist Winowiecki at CIFOR-ICRAF.

So much soil has eroded in Kenya, India and many other places around the world that the ground’s seed bank – grass seeds ready to sprout once rain falls – has also been depleted, meaning restoring some areas would require manually reseeding it, said Tor-Gunnar Vagen, CIFOR-ICRAF’s principal scientist.

“The whole system is at a tipping point. Climate change is just accelerating all of that.”

Ukrainian troops reclaim dozens of towns from Russian control, close in on ...