The Times of Earth, International Edition
0
265 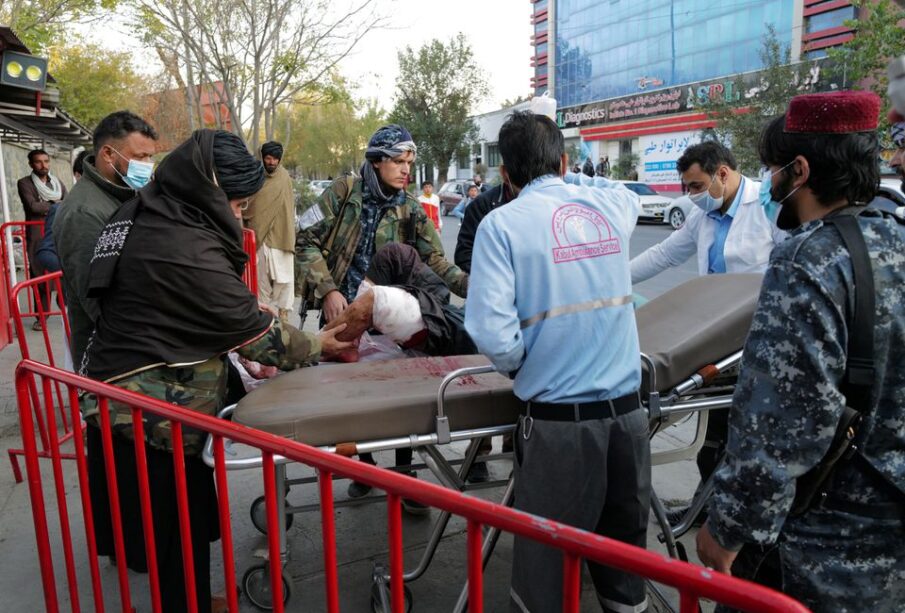 A Taliban fighter, injured during a blast, is pictured at the entrance of a hospital in Kabul, Afghanistan November 2, 2021. REUTERS/Zohra Bensemra

The explosions hit the entrance of the 400-bed Sardar Mohammad Daud Khan hospital and were followed with an assault by a group of Islamic State gunmen, all of whom were killed within 15 minutes, Taliban spokesman Zabihullah Mujahid said.

He said Taliban special forces dropped by helicopter had prevented the attackers from entering the hospital itself, with all killed at the entrance or in the courtyard. Earlier another spokesman said one of the attackers was captured.

The blasts add to a growing list of attacks and killings since the Taliban completed their victory over the Western-backed government in August, undermining their claim to have restored security to Afghanistan after decades of war.

There was no immediate claim of responsibility but the operation was typical of the complex attacks mounted by Islamic State. It follows a string of bombings by the group which has emerged as the biggest threat to Taliban control of Afghanistan.

A Taliban security official, speaking on condition of anonymity, said at least 25 people had been killed and more than 50 wounded in the assault but there was no officially confirmed casualty toll.

Among the dead was Mawlawi Hamdullah Mukhlis, head of the Kabul military corps and one of the first senior Taliban commanders to enter the abandoned presidential palace when the city fell, Taliban officials said.

Photographs shared by residents showed a plume of smoke over the area of the blasts near the former diplomatic zone in the Wazir Akbar Khan area of the city.

Witnesses said at least two helicopters flew over the area as the assault went on, one of the first times Taliban forces have used aircraft captured from the Western-backed government in a military operation.

A health worker at the hospital, who managed to escape, said he heard a large explosion followed by gunfire and a second, larger explosion about 10 minutes later.

Islamic State, which has carried out a series of attacks on mosques and other targets since the Taliban’s seizure of Kabul in August, mounted a complex attack on the hospital in 2017, killing more than 30 people.

The group’s attacks have caused mounting worries outside Afghanistan about the potential for the country to become a haven for militant groups as it was when an al Qaeda group attacked the United States in 2001.

“It’s just about the biggest concern at the moment for everyone, in the region and in the West,” a senior Western diplomat said.

The United Nations’ mission in Afghanistan (UNAMA), along with countries including Pakistan, condemned the attack.

“Attacks targeting medical personnel and civilians seeking treatment are violations of human rights and international humanitarian law. Those responsible need to be held to account,” UNAMA said in a tweet.

The concern has been worsened by a spiralling economic crisis that has threatened millions with poverty as winter approaches and left thousands of former fighters with no employment.

The abrupt withdrawal of international support following the Taliban victory has brought Afghanistan’s fragile economy to the brink of collapse just as a severe drought has threatened millions with hunger.