The Times of Earth, International Edition
0
438 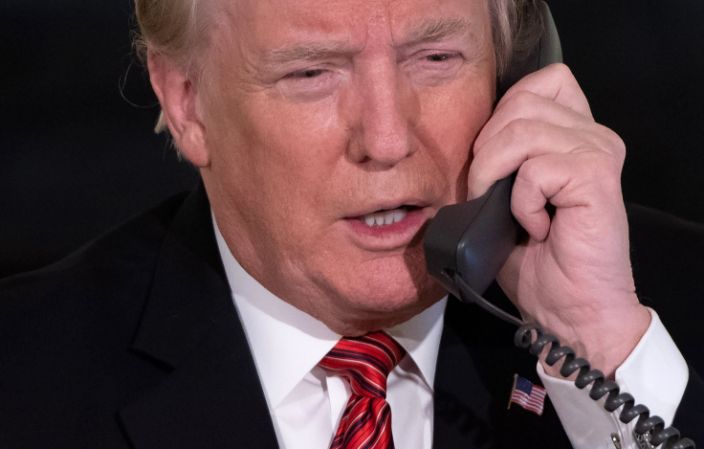 Donald Trump’s phone calls have gotten him into considerable trouble over the years. (AFP via Getty Images)

Donald Trump, the president of the United States, has urged Georgia’s top election official to recalculate the state’s presidential election results in his favour, while warning the official he was taking “a big risk” if he did not comply, according to the audio of an hour-long phone call obtained by The Washington Post.

During the call on Saturday, Trump continued his attempts to overturn the election results in Georgia, where President-elect Joe Biden won by a margin of 11,779 votes.

Trump has refused to concede to Biden, despite a resounding loss in the November 3 election, and the failure to overturn the results in several states.

Georgia had already conducted several audits and recounts of the result, which affirmed Biden’s victory, and officially certified those results, which will be approved by Congress on January 6.

Still, Trump told Republican Secretary of State Brad Raffensperger in the call: “So look. All I want to do is this. I just want to find 11,780 votes, which is one more than we have. Because we won the state.”

At another point in the phone call, Trump told Raffensperger: “The people of Georgia are angry, the people in the country are angry … And there’s nothing wrong with saying, you know, that you’ve recalculated.”

Raffensperger responded: “Well, Mr President, the challenge that you have is, the data you have is wrong.”

Donald Trump and Joe Biden head to Georgia on Monday to rally their party faithful ahead of twin runoffs that will decide who controls the US Senate, one day after the release of a bombshell recording of the outgoing president that rocked Washington.

If Democratic challengers defeat the Republican incumbents in both races Tuesday, the split in the upper chamber of Congress will be 50-50, meaning incoming Vice President Kamala Harris will have the deciding vote.

The dueling rallies by the outgoing president and his successor were set to be the final exclamation mark on a two-month blitz in the southern state awash in campaign donor cash.

But instead, Sunday’s release of Trump’s stunning conversation with Georgia’s Secretary of State Brad Raffensperger, a fellow Republican, only succeeded in diverting attention from the Senate races, a must-win for his party.

Trump still refuses to concede that he lost to Biden in November, despite multiple recounts and court rulings undermining his case.

The Republican billionaire has also continued to make repeated accusations of voter fraud and election rigging without providing evidence.

In the audio recording, Trump urges Raffensperger to “find 11,780 votes” — one more than Biden’s margin of victory — and makes vague threats that Raffensperger and his general counsel could face “a big risk” if they failed to honor his request.

Raffensperger is heard responding: “Well, Mr. President, the challenge that you have is, the data you have is wrong.”

Vice President-elect Harris slammed the call as a “bald-faced, bold abuse of power by the president of the United States” during a Sunday rally for the Democratic Senate candidates in Savannah, Georgia.

But Trump still has support within his party.

Republican Senator Kelly Loeffler, who has been an ardent Trump supporter, did not answer a question about the recording during a campaign event.

And before news of the tape reached the public, many pro-Trump voters said Sunday they believed that the president had won Georgia.

Months after the presidential election, Georgia is still in full campaign mode, with buses ferrying candidates around to small-town rallies, signs everywhere and door-to-door canvassing.

The trips by Trump and Biden underscore the importance of the upcoming poll — but Trump’s visit could backfire if the repercussions from the tape linger.

Georgia has not sent a Democrat to the Senate in 20 years.

Victory by challengers Raphael Warnock and Jon Ossoff over Loeffler and David Perdue, respectively, would give the Democrats — and Biden — a major boost, as they already control the House of Representatives.

Trump’s appearance on behalf of Loeffler and Perdue is expected to be his last major rally before leaving the White House on January 20.

The former real estate mogul will likely be received as a hero in Dalton, a town in a rural, conservative district in northwestern Georgia.

“Trump 2020” signs still abound throughout the region — they are indeed more plentiful even than those for Loeffler, 50, and Perdue, 71.

Biden will be in the state capital Atlanta, where he will campaign with Warnock, a 51-year-old Black pastor, and Ossoff, a 33-year-old audio-visual producer.

Vice President Mike Pence will campaign in a rural area south of Atlanta.

“Everything is at stake” in the runoffs, Harris said Sunday. “The future of our country will be very much in the mix.”

Republicans are also saying the future of the United States is in jeopardy.

“We are the firewall to socialism coming to America,” Loeffler told supporters in the scenic town of Cartersville.

Polls show the candidates are neck-and-neck in both races.

Republicans are typically the favorites in this traditionally conservative state. But Democrats are hoping Biden’s surprising November 3 victory in Georgia — the first Democrat to win the state since 1992 — is a bellwether for Tuesday.

All these factors have created a situation that’s “really too close to call,” Trey Hood, a political science professor at the University of Georgia, told AFP.