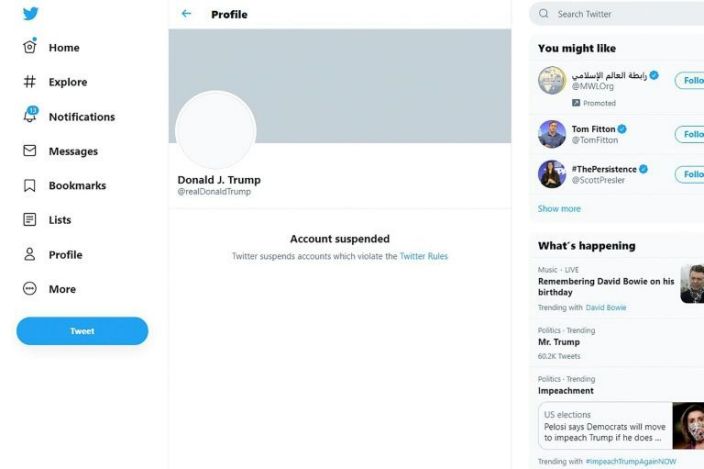 Twitter shut down President Donald Trump’s account Friday, booting him from the global service to prevent another attack on the US Capitol building.

Trump had fervently used @realDonaldTrump for proclamations, accusations and misinformation unchallenged for his entire time in office.

Twitter’ decision to permanently suspend Trump is considered overdue by critics who argue he has gotten away with abuses, but has inflamed members of the far-right who equate fact-checking with stifling free speech.

“After close review of recent Tweets from the @realDonaldTrump account,” Twitter said in a blog post explaining its decision, “we have permanently suspended the account due to the risk of further incitement of violence.”

He fired off tweets from the official presidential account @POTUS, accusing the company of conspiring with the “Radical Left.” The social network quickly deleted the tweets.

Trump also tweeted from the @TeamTrump campaign account, which was soon suspended.

“We have taken steps to enforce this with regard to recent Tweets from the @POTUS account.”

Twitter blocked Trump temporarily after the deadly attack on the US Capitol Wednesday, warning the suspension could become permanent.

He was suspended Friday after a pair of tweets: in one, Trump vowed that none of his supporters would be “disrespected.” In another, he said he would not attend successor Joe Biden’s inauguration on January 20, as is customary.

“These two Tweets must be read in the context of broader events in the country and the ways in which the President’s statements can be mobilized by different audiences, including to incite violence, as well as in the context of the pattern of behavior from this account in recent weeks,” Twitter said.

“But, it should concern everyone when companies like Facebook and Twitter wield the unchecked power to remove people from platforms that have become indispensable for the speech of billions.”

Trump has a press team and can easily turn to sympathetic outlets such as Fox News, while other people who could be shut out by the social networks don’t have that luxury, Ruane noted.

Social media companies such as Twitter have the right to decide what appears on their platforms and set standards for appropriate content. The First Amendment right to free speech prevents governments from stifling expression and does not apply to private businesses.

Twitter said it also factored in that plans for more armed protests have been proliferating on and off the service, including a proposed second attack on the US Capitol and state capitol buildings on January 17.

Trump’s tweeted statement about not attending the Inauguration has been received by some supporters as his continued rejection of the election’s legitimacy and a sign that the event would be a “safe target” since he won’t be there, according to Twitter.

Supporters also viewed the tweets’ wording as praise for those involved in what has been described as a coup attempt and indication he does not plan to yield power to President-elect Biden, Twitter said in the post.

“We are living Orwell’s 1984,” Donald Trump Jr. tweeted from his account. “This is absolute insanity!”

Trump, who at 81.7 million followers had one of Twitter’s 10 most popular accounts, preferred using the platform to get out his message without submitting himself to questions from reporters.

But the US leader has been at war with his favored social media platform since the presidential election, after Twitter took the unprecedented decision to fact-check some of his tweets.

Twitter confirmed Friday that several hundred employees signed a letter to chief executive Jack Dorsey saying they were disturbed by the “insurrection” carried out by Trump supporters, who had been rallied by the president.

The employees called for Twitter to assess the role its platform played in Wednesday’s events.

Twitter also removed the accounts of Michael Flynn and other high-profile Trump supporters who promoted the QAnon conspiracy theory.

“The accounts have been suspended in line with our policy on Coordinated Harmful Activity,” Twitter told AFP.

“Given the renewed potential for violence surrounding this type of behavior in the coming days, we will permanently suspend accounts that are solely dedicated to sharing QAnon content.”

Flynn has met with Trump at the White House to collaborate about how to overturn the presidential election results.

Facebook also has banned Trump from the platform “indefinitely” due to his efforts to incite violence at the US Capitol, according to chief executive Mark Zuckerberg.

Zuckerberg said a one-day ban imposed on Trump’s accounts on Facebook and Instagram was extended because of Trump’s “use of our platform to incite violent insurrection against a democratically elected government.”

The announcement came after the outgoing president was locked out of all major social media platforms due to his false claims about the legitimacy of his loss to Biden, and for inciting the angry mob that stormed the US Capitol.