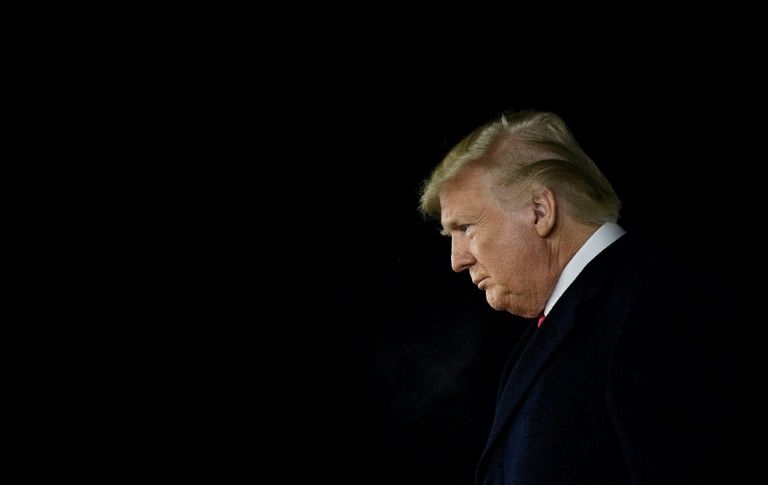 President Donald Trump was impeached for abuse of power in a historic vote in the House of Representatives on Wednesday, setting up a Senate trial on removing him from office after three turbulent years.

By a 230 to 197 vote in the Democratic-majority House, the 45th US president became just the third occupant of the White House in American history to be impeached.

Democrats said they had “no choice” but to formally charge the 73-year-old Republican, whose impeachment along stark party lines places an indelible stain on his record while driving a spike ever deeper into the US political divide.

“What is at risk here is the very idea of America,” said Adam Schiff, the lawmaker who led the impeachment inquiry, ahead of the vote.

Trump will now stand trial in the Senate, where his Republicans hold a solid majority and are expected to exonerate him.

After a marathon 10-hour debate, lawmakers also voted 229-198 to approve the second article of impeachment facing Trump — for obstructing the congressional probe into his Ukraine dealings.

Trump spent the first part of the day holed up at the White House, tweeting in frustration, but on Wednesday night the president was on friendlier territory.

In an extraordinary split screen moment, as the House was casting votes to impeach him, thousands of Trump’s most fervent supporters were cheering him at a rally in Michigan where he railed against a “radical left” he said was “consumed with hatred.”

“The Democrats are declaring their deep hatred and disdain for the American voter,” Trump said to boos and cheers.

Despite testimony from 17 officials that Trump leveraged his office for political gain, the president maintained his innocence throughout the impeachment inquiry — denouncing it as an “attempted coup” and an “assault on America.”

White House spokeswoman Stephanie Grisham blasted the House vote as “one of the most shameful political episodes in the history of our Nation,” saying Trump “is prepared for the next steps and confident that he will be fully exonerated.

Neither of the two previous presidents impeached since 1789, Andrew Johnson in 1868 and Bill Clinton in 1998, was convicted in the Senate, and both held onto their jobs.

But despite the high likelihood of Trump being cleared by Senate Republicans, Democrats said that overwhelming evidence had forced the House to act.

“It is tragic that the president’s reckless actions make impeachment necessary. He gave us no choice,” said Speaker Nancy Pelosi.

“It is a matter of fact that the president is an ongoing threat to our national security and the integrity of our elections.”

The day of dramatic and often angry oratory saw both sides delving deep into Constitutional law, citing the country’s hallowed founders Benjamin Franklin or Alexander Hamilton, as outside Congress protesters clamored for impeachment.

Republicans claimed Trump was treated more unfairly than those tried as witches in the 17th century — or even than Jesus Christ.

“Pontius Pilate gave Jesus the opportunity to face his accusers. During that sham trial, Pontius Pilate afforded more rights to Jesus than the Democrats afforded this president and this process,” said Georgia Republican Barry Loudermilk.

“Voters will never forget that Democrats have been triggered into impeaching the president, because they don’t like him, and they don’t like us,” charged Republican Matt Gaetz.

On Wednesday night, Trump himself weighed in, tweeting an ominous black and white photo of himself, finger pointing forward, captioned: “In reality they’re not after me(.) They’re after you(.) I’m just in the way.”

Both sides were already gearing up for a battle over the Senate trial, where Republican Majority Leader Mitch McConnell has the upper hand in setting rules and has already said he will coordinate with Trump’s team in doing so.

That could lead to a trial as short as two weeks, which by acquitting the president could turn impeachment into a political win in the run-up to the November 2020 election.

Democrats declared after Wednesday’s vote that McConnell needs testimony from four current and former White House aides with direct knowledge of Trump’s Ukraine dealings — and who he blocked from testifying in the House.

“The question is now whether Senator McConnell will allow a fair trial in the Senate, whether the majority leader will allow a trial that involves witnesses and testimony and documents,” said Schiff.

Pelosi hinted that the House leaders could hold off sending the articles of impeachment to the Senate to pressure McConnell on the witness issue.

“So far, we haven’t seen anything that looks fair to us,” she told reporters. “We’ll decide what that dynamic is.”

“But right now, the president is impeached.”