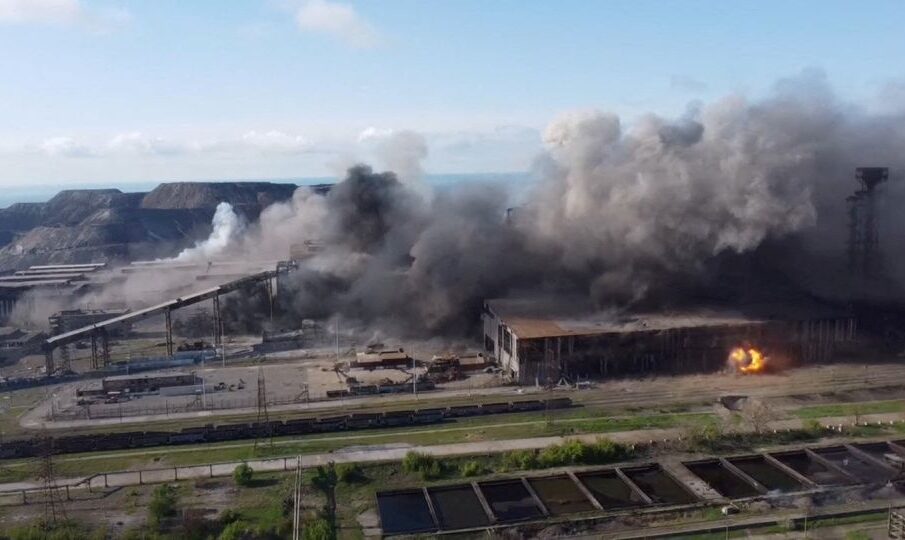 An aerial view shows shelling in the Azovstal steel plant complex, amid Russia's invasion of Ukraine, in Mariupol, Ukraine, in this screen grab taken from a handout video released on May 5, 2022. Azov Regiment/Handout via REUTERS

Ukraine’s President Volodymyr Zelenskiy said diplomatic efforts were underway to save the remaining fighters holed up inside the Azovstal steelworks in the city of Mariupol, as more civilians were evacuated from the bombed-out plant.

The defenders have vowed not to surrender. Ukrainian officials fears Russian forces want to wipe them out by Monday, in time for Moscow’s commemorations of the Soviet Union’s victory over Nazi Germany in World War Two.

Mariupol has endured the most destructive bombardment of the 10-week-old war. The sprawling Soviet-era Azovstal plant is the last part of the city – a strategic southern port on the Azov Sea – still in the hands of Ukrainian fighters.

Zelenskiy said in a late-night video address that Ukraine was working on a diplomatic effort to save defenders barricaded inside the steelworks. It was unclear how many Ukrainian fighters remained there.

“Influential intermediaries are involved, influential states,” he said, but provided no further details.

United Nations-brokered evacuations began last weekend of some of the hundreds of civilians who had taken shelter in a network of tunnels and bunkers beneath the plant. But they were halted during the week by renewed fighting.

On Friday afternoon, 50 women, children and elderly people were evacuated, Ukrainian Deputy Prime Minister Iryna Vereshchuk said, adding that the operation would continue on Saturday. The Russian side constantly violated a ceasefire, she said, making the evacuation very slow.

Russia confirmed the number of evacuees and said: “The humanitarian operation at Azovstal will continue on May 7.”

The city’s mayor estimated earlier this week that 200 people were trapped at the plant with little food or water. It was unclear how many remained.

Ukrainian presidential adviser Oleksiy Arestovych said Russia was trying to finish off forces inside the plant to seize it by Monday as a gift for President Vladimir Putin in time for the Victory Day holiday.

Putin declared victory in Mariupol on April 21, ordered the plant sealed off and called for Ukrainian forces inside to disarm. But Russia later resumed its assault on the plant.

Asked about plans for Russia to mark the World War Two anniversary day in parts of Ukraine it holds, Kremlin spokesperson Dmitry Peskov said: “The time will come to mark Victory Day in Mariupol.”

Ukraine and its western allies say that after failing to seize the capital Kyiv, Russian forces have made slow progress in their revised aim of capturing the country’s east and south, but may also plan to involve Ukraine’s western neighbour, Moldova.

Mariupol, which lies between the Crimea Peninsula seized by Moscow in 2014 and parts of eastern Ukraine taken by Russia-backed separatists that year, is key to linking up the two Russian-held territories and blocking Ukrainian exports.

Kharkiv regional governor Oleh Sinegubov reported three shelling attacks on the city of Kharkiv and in the village of Skovorodinyvka, which caused a fire which nearly destroyed the Hryhoriy Skovoroda Literary Memorial Museum.

Skovoroda was a philosopher and poet in the 1700s in the Russian Empire.

“This year marks the 300th anniversary of the great philosopher’s birth,” Sinegubov said in a social media post. “The occupiers can destroy the museum where Hryhoriy Skovoroda worked for the last years of his life and where he was buried. But they will not destroy our memory and our values.”

Sinegubov said the museum’s collection was not damaged as it had been moved to a safer place.

Moscow calls its actions a “special military operation” to disarm Ukraine and rid it of what it calls anti-Russian nationalism fomented by the West.

Ukraine and the West say Russia launched an unprovoked war and have accused Russian forces of war crimes. Moscow denies the allegations and says it targets only military or strategic sites, not civilians.

More than 5 million Ukrainians have fled abroad since the start of the invasion.

U.S. President Joe Biden signed a $150 million weapons package for Ukraine on Friday, providing additional artillery munitions, radar and other equipment in the latest in a series of transfers to help Kyiv repel Russia’s invasion.

Biden and other Western leaders plan to hold a video call with Zelenskiy on Sunday, the White House said, in a show of unity.

The U.N. Security Council – including Russia – expressed “deep concern” over the situation in Ukraine, its first statement since the Feb. 24 invasion.

The most severe sanctions ever imposed on a major power have resulted in Russia’s $1.8 trillion economy heading for its biggest contraction since the years following the 1991 break-up of the Soviet Union. The European Union has proposed more measures.

But the new package of sanctions, which includes an oil embargo, has run into some opposition, with Hungarian Prime Minister Viktor Orban likening that to an “atomic bomb” dropped on the economy.