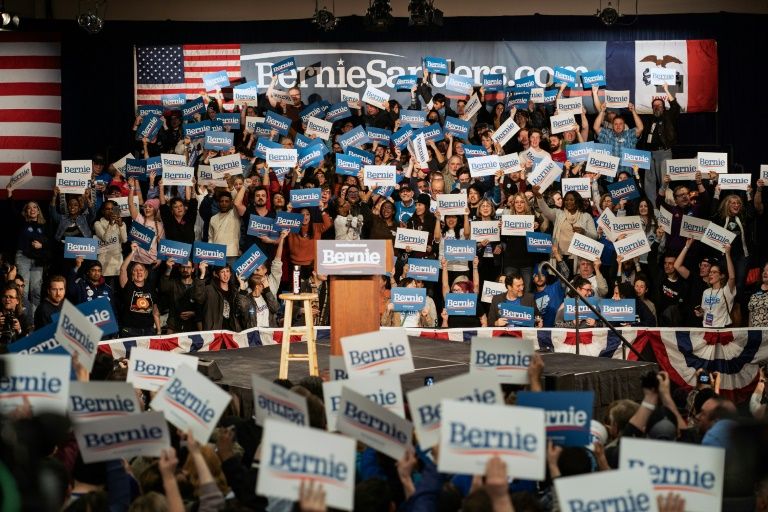 Democratic candidates were anxiously awaiting results from the Iowa caucuses on Tuesday after technical glitches plunged the kickoff vote of the US presidential nominating contest into chaos, drawing the mockery of President Donald Trump.

Pete Buttigieg, the 38-year-old former mayor of South Bend, Indiana, claimed victory although the Iowa Democratic Party had not yet released any official results, and Vermont Senator Bernie Sanders also declared that he had done “very, very well.”

Former vice president Joe Biden’s campaign for its part said that although it had “zero official data” so far it believed it had won its “fair share” of the vote and it was a “tight race with bunched up candidates.”

But Joe Rospars, chief strategist for Massachusetts Senator Elizabeth Warren, chided the other candidates, tweeting that “any campaign saying they won or putting out incomplete numbers is contributing to the chaos and misinformation.”-

The Iowa Democratic Party said precinct results were still coming in and blamed the delay on an app that was reporting only partial data.

“While our plan is to release results as soon as possible today, our ultimate goal is to ensure that the integrity and accuracy of the process continues to be upheld,” it said in a statement.

“We have every indication that our systems were secure and there was not a cyber security intrusion,” it added.

Buttigieg, who is battling Biden for the moderate wing of the party, said that based on an internal tally it was a “clear victory for this campaign.”

“We were able to demonstrate both the winning message and the winning organization,” Buttigieg said in an interview with MSNBC.

“This is really the first proof point for how we’re building the campaign that is ultimately going to go on to defeat Trump” in November’s presidential election, he added.

Sanders, 78, said he had “a good feeling we’re going to be doing very, very well here in Iowa.”

“Tonight in this enormously consequential 2020 election, the first state in the country has voted, and today marks the beginning of the end for Donald Trump,” said the self-described democratic socialist.

“I think they’ll be able to count them by hand, just like they used to,” Klobuchar told CNN. “I’m sure they’re working hard.”

With Iowa still mired in confusion, Democratic candidates were already turning their sights on the next nominating contest, which takes place in New Hampshire on February 11.

According to a Boston Globe/WBZ-TV/Suffolk University poll released Monday, Sanders is leading in New Hampshire with 24 percent support followed by Biden with 18 percent, Warren with 13 percent and Buttigieg with 11 percent.

Republicans led by Trump gloated over the Democratic setback, a closely-watched test in the months-long process to determine who will be the party nominee in November.

“The Democrat caucus is an unmitigated disaster,” Trump tweeted. “Nothing works, just like they ran the country.”

Alluding to his own victory in Republican caucuses in Iowa, Trump said “the only person that can claim a very big victory in Iowa last night is ‘Trump.'”

“When will the Democrats start blaming RUSSIA, RUSSIA, RUSSIA, instead of their own incompetence for the voting disaster that just happened in the Great State of Iowa?” Trump said.

Trump is to deliver his nationally televised “State of the Union” address later Tuesday to a joint session of Congress under the cloud of impeachment but all but certain acquittal in the Senate on Wednesday.

According to Buttigieg’s website, citing results from 1,200 of the 1,700 precincts in Iowa, he earned the support of 24.7 percent of the 152,000 voters who took part in Monday’s caucuses.

Results released by the Sanders campaign from nearly 40 percent of the Iowa precincts showed him with 28.62 percent of the state delegate equivalent, the figure used to determine who wins the Iowa caucuses.

Buttigieg was credited with 25.71 percent, followed by Warren with 18.42 percent and Biden with 15.08 percent which, if confirmed, would be a disappointing showing for the candidate who has consistently claimed he is the person best positioned to take on and defeat Trump.

Trump spurns Pelosi handshake, she tears up his speech