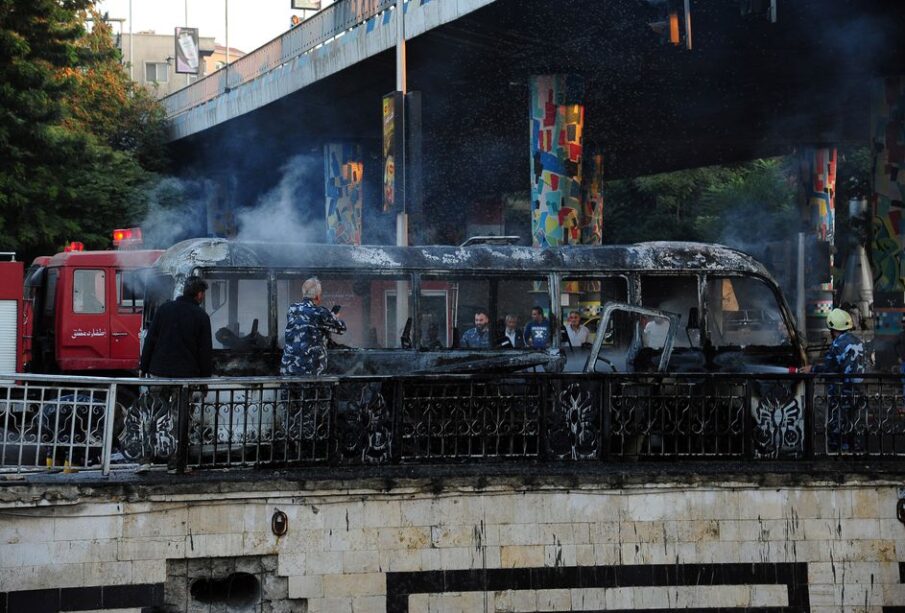 Civil defense members put out a bus fire at the site of a roadside bomb attack in central Damascus, Syria, in this handout released by SANA October 20, 2021. SANA/Handout via REUTERS

The violence appeared to mark one of the bloodiest days in months in Syria, where a decade of conflict has killed hundreds of thousands of people and fractured the country.

There was no immediate claim of responsibility for the Damascus bomb, which exploded as a bus carrying army personnel was crossing a bridge in the middle of the capital during the morning rush hour, state television reported.

Syrian state TV posted on its Telegram account images of the charred cabin of the bus, and rescue workers could be seen removing body parts. The channel reported at least 14 people were killed and three wounded.

Two explosive devices went off as the bus was on the Hafez al-Assad bridge, it said. A third device was defused by an army engineering unit in what officials said was a terrorist blast.

Bomb attacks in Damascus have been rare since forces loyal to President Bashar al-Assad crushed rebel enclaves around the city. Helped by a Russian military presence and Iranian Shi’ite militias, Assad now controls most of the country.

Northwestern Syria is the last major stronghold of rebels fighting Assad. The witnesses and rescue workers said shelling struck residential areas of the rebel-held town of Ariha shortly after the Damascus bomb attack.

Among the casualties were several school children, witnesses and medical workers in the opposition enclave said.

Islamic State militants continue to operate in the Syrian desert, where they have mounted several attacks this year on army vehicles.