The Times of Earth, International Edition
0
809 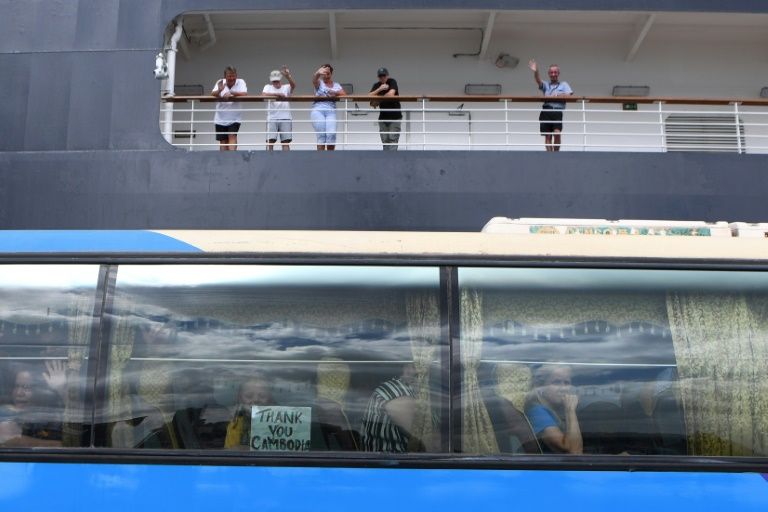 The feel-good story of how Cambodia allowed a cruise ship to dock after it was turned away elsewhere in Asia for fear of spreading the deadly virus that began in China has taken an unfortunate turn after a passenger released from the ship tested positive for the virus.

News over the weekend that an 83-year-old American woman who was on the ship and flew from Cambodia to Malaysia was found to be carrying the virus froze further movement of the passengers and crew of the MS Westerdam. Some are now in hotels in Cambodia’s capital, Phnom Penh, while others are still aboard the ship.

The American woman was among several hundred passengers who were flown out of Cambodia on Friday and Saturday. According to authorities in Malaysia, 143 continued their flights home from that country, while the woman and her 84-year-old husband, who was diagnosed with pneumonia, remained behind for treatment.

The virus has infected more than 71,000 people globally and killed more than 1,770, with the vast majority of the cases in China, where the outbreak began two months ago.-

The dispersal around the world of passengers from the ship with possible exposure to the virus has sparked concern.

“I think now given that there is a confirmed case that is suspected to have acquired infection on board the ship, the other passengers should be asked to quarantine themselves at home and alert health authorities if they develop fever or respiratory symptoms within the 14 days since disembarkation,” said Professor Benjamin Cowling from the School of Public Health at Hong Kong University.

Dr. Gagandeep Kang, executive director of India’s Translational Health Science and Technology Institute, said it is unclear whether the woman’s infection would result in an outbreak in another part of the world.

“We will have to wait and see,” she said, adding that it would depend on where the woman got the infection, and at what stage of the infection she was in while in contact with other people.

The ship’s operator, Holland America Line, said in a statement Monday that Cambodian health officials were on board the ship testing the 255 guests and 747 crew who were awaiting clearance, and that guests currently staying at a Phnom Penh hotel had all been tested.

“At this time, no other guests or crew on board or at the hotel have reported any symptoms of the illness. Guests who have already returned home will be contacted by their local health department and provided further information,” it said.

The statement pointed out that the American woman who tested positive in Malaysia was not one of the 20 people on board the Westerdam who had reported to the ship’s medical center during the cruise. All of those 20 have tested negative for the virus, it said.

The rest of the passengers and crew had health checks that included filling out a written health questionnaire and having their temperatures checked, which has become standard procedure for air and sea passengers considered at risk.

Several Westerdam passengers from the United States and elsewhere have already returned home and spoken to the media.

Two of the passengers, Joseph Schaeffer and his wife, Paulette, a retired nurse, told the Las Vegas Review-Journal from their home in Henderson, Nevada, that they felt the hue and cry over the released passengers was not totally merited.

“It doesn’t seem to me that the whole world should be jumping at this,” Joseph Schaeffer said.

“There are more deaths from the flu than there have been from this particular virus,” his wife said.

The couple said they were screened on their way home at airports in Phnom Penh and Singapore by thermal scanners that remotely monitor arriving passengers.

On arrival in Los Angeles, they said, they were among a large crowd getting screened that included fellow cruise passengers. They said they answered questions given by someone from the Centers for Disease Control and Prevention that included whether they felt sick, had visited mainland China or knew anyone who had contracted the virus.

Two Canadians who returned via Vancouver International Airport were asked to put on protective face masks on arrival but were not otherwise isolated, Canada’s CBC News reported.

“We were asked a few questions and filled out an immigration form, and they very nicely helped us bypass the usual lineups and let us out the door,” said Joseph Hansen, who took the cruise with his wife. “We’re feeling fine.”

Hansen, from Surrey, British Columbia, told CBC that he did not hear about the American woman in Malaysia with the virus until he landed in Vancouver on Sunday.

“I guess on the one hand it’s upsetting to know that there was one case, but we’re feeling fine,” he said. “We’ve had health scans, temperature scans and we don’t have any concerns for our own health.”

Cambodia’s government had originally earned kudos from the head of the U.N.’s World Health Organization and the U.S. ambassador there for allowing the ship to dock at the port at Sihanoukville on the Gulf of Thailand after being turned away by Japan, Taiwan, the Philippines, Guam and Thailand.

The move was seen as a victory for the image of Cambodia’s authoritarian prime minister, Hun Sen, who welcomed the ship’s passengers with handshakes and flowers. He boasted that although Cambodia is a poor country, it “has always joined the international community to solve the problems that the world and our region are facing.”

WHO Director-General Tedros Adhanom Ghebreyesus had said he was pleased Cambodia had agreed to accept the Westerdam and described it as an example of the international solidarity advocated by the U.N. health agency.

“The one thing I can say is we’re very, very grateful that Cambodia has opened literally its ports and its doors to people in need,” U.S. Ambassador to Cambodia W. Patrick Murphy said Saturday when he took his family to the port to meet passengers. “We think this sends a strong message. We all have to help each other.”

In hindsight, however, Cambodia’s handling of the ship’s passengers has been criticized on social media, though it also has gotten some support.

According to Cowling, the Hong Kong University professor, it’s a good idea to let passengers leave and monitor them after disembarkation.

Since there were no known cases on board the Westerdam at the time passengers left the ship, it was reasonable to allow them to travel home, he said.

“I think it would not be appropriate to keep passengers on the ship for 14 days, as it could be a high-risk environment,” Cowling said.

“We have seen the consequences of holding passengers on a cruise ship with the Diamond Princess outbreak,” he said, referring to another cruise ship that is quarantined in Yokohama, Japan, with hundreds of cases among the passengers.

A scramble intensified Monday to trace passengers from a US cruise liner allowed to disembark in Cambodia despite at least one traveller later being diagnosed with the deadly coronavirus.

There are fears scores of cruise goers have been scattered across the world without full health checks — as Cambodia on Monday afternoon treated a few dozen of the passengers to bus tours around the capital Phnom Penh.

Passenger Christina Kerby, whose drole tweets as the Westerdam was bounced across ports drew widespread attention, admitted she “was surprised” to be allowed on a tour of the Cambodian capital before being given the complete all-clear from the virus.

“I have young kids back home (in the US) and wouldn’t want to risk infecting them or anyone around me if I am carrying the virus,” she told AFP.-

The Westerdam was at sea for two weeks during which it was barred from Japan, Guam, the Philippines, Taiwan, and Thailand over fears it could be carrying the virus, which originated in China and has killed nearly 1,800 people.

On Thursday Cambodia, a staunch ally of Beijing, allowed the ship to dock at Sihanoukville.

It was met by the kingdom’s bombastic premier, who hugged disembarking passengers as he swiftly latched on to the Westerdam’s PR potential for a nation more often in the spotlight for human rights abuses.

His stance won applause from US President Donald Trump.

But three days later one Westerdam passenger, an 83-year-old American, was stopped on arrival in Malaysia and later diagnosed with the coronavirus.

On Monday Malaysia said over 130 other passengers who also took the flight with the sick American women left for the US, Europe and Australia and Hong Kong.

Thailand, a flight hub already used by scores of the Westerdam passengers, on Monday mulled a ban on transit by cruise goers, as the region played catch up to the risks posed by the boat.

“Passengers on ship are at risk and travel by airplane will cause risk to other passengers,” health minister Anutin Charnvirakul said Monday.

Cruise operator Holland America is working with national health authorities “to investigate and follow up with individuals who may have come in contact with the guest”, chief medical officier Dr Grant Tarling said late Sunday.

Yet health risks appeared secondary to authorities in Cambodia, a poor country with a threadbare medical system.

On Monday afternoon, passengers waiting for onward flights were gifted the bus tour of Phnom Penh.

Photos in government-aligned media showed them smiling, giving thumbs ups and none with a mask on.

“There were tons of media lining the street” Kerby said, adding she “was not expecting such a showing”.

Another 233 passengers and 747 crew remain on the Westerdam, which is still docked at Sihanoukville.

Authorities have been allowing them to leave the vessel in groups based on their flight bookings but those on board told AFP they are now not permitted to disembark.

A Sihanoukville spokesman said Monday health samples are being collected from all onboard the Westerdam “in order to be clear”, adding that passengers will not go off-ship until the tests are completed.

China’s foreign minister Wang Yi will meet Southeast Asian counterparts in late Laos this week to discuss the unprecedented health crisis, which has battered manufacturing and tourism across the region and led to an array of travel restrictions

In China more than 70,000 people have been infected with the coronavirus while about 900 infections have been reported in other countries.

“We have seen the consequences of holding passengers on a cruise ship with the Diamond Princess outbreak,” he said, referring to another cruise ship that is quarantined in Yokohama, Japan, with hundreds of cases among the passengers.