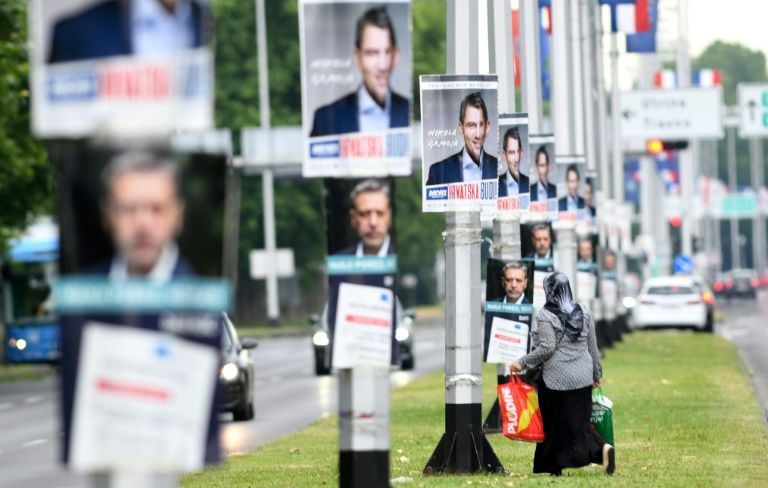 Croatia goes to the polls on Sunday (AFP Photo/Denis LOVROVIC)

Croatians went to polls Sunday to choose a government to navigate the ongoing coronavirus pandemic in a general election campaign that has been dominated by the health crisis.

The pandemic has put the European Union country’s tourism-dependent economy on course for a contraction of nearly 10 percent — its steepest decline in decades.

The ruling conservative HDZ party has been touting its relative success in containing Croatia’s outbreak thus far, with an official tally of roughly 100 deaths and 3,000 infections.

But a rise of cases in recent weeks, with dozens recorded daily, has renewed fears over the health situation and given the opposition fresh ammunition.

“Everyone is scared about what will happen in autumn,” Vesna Trnokop, a 60-year-old economist from Zagreb, told AFP.

“The coronavirus has changed economies, not only in Croatia, everywhere, so we should change our ideas.”

Polling stations across the Adriatic country opened at 7:00 am (0500 GMT) and will close 12 hours later.

HDZ is set for a close race with the main centre-left opposition and also risks losing votes to a new right-wing movement gunning for third place.

Neither of the two main contenders — Prime Minister Andrej Plenkovic’s HDZ or the ‘Restart’ coalition led by the Social Democrats (SDP) — are expected to win an outright majority in the 151-seat assembly, surveys show.

Opposition leader and prime minister candidate Davor Bernardic has accused the government of “consciously pushing Croatia into a risk” by deciding to go ahead with the election in the middle of the COVID-19 pandemic.

His party cancelled electoral rallies over health concerns while voters have been asked to wear masks and bring their own pens.

Plenkovic, meanwhile, is hoping the uncertain future will inspire voters to stick with HDZ, in power since 2016.

Now is the time for “serious choices and not for political quackery”, said the former MEP with strong backing from Brussels, who has dismissed his rivals as ill-prepared.

“Croatia doesn’t have time for experiments like Bernardic or Skoro,” he told AFP.

Petar Dragic, a taxi driver from Zagreb, agreed with the prime minister and said he would vote for HDZ.

“I’m pragmatic, don’t care who is left or right. Only Plenkovic is capable of pulling funds from Brussels and this is what we need now,” he told AFP referring to both the pandemic and looming economic crisis.

Yet some Croatians are hungry for new faces in a country struggling with massive emigration driven by low salaries and corruption at home.

“There is not enough focus on Croatians leaving for abroad, unemployment and poor salaries of young people.”

The government’s rivals are also seizing on recent graft scandals that have rocked the party, with Bernardic calling for a “new start” instead of HDZ’s “path of corruption”.

In his final address ahead of the vote, right-wing Skoro argued that only his new party “guarantees a change, while SDP and HDZ guarantee the continuity of bad governance”.

The popular musician made his debut when he finished third in Croatia’s December presidential election, inspiring him to form a new movement.

Analysts say HDZ could ultimately accept a tie-up with the singer, despite anger over his moves to break off a segment of their traditional voting base.

SDP, on the other hand, is unlikely to consider such an alliance given 57-year-old Skoro’s nostalgia for Croatia’s pro-Nazi past and accusations of sexism.

Some 3.8 million people are eligible to vote with first official results due late Sunday.