The Times of Earth, International Edition
0
479 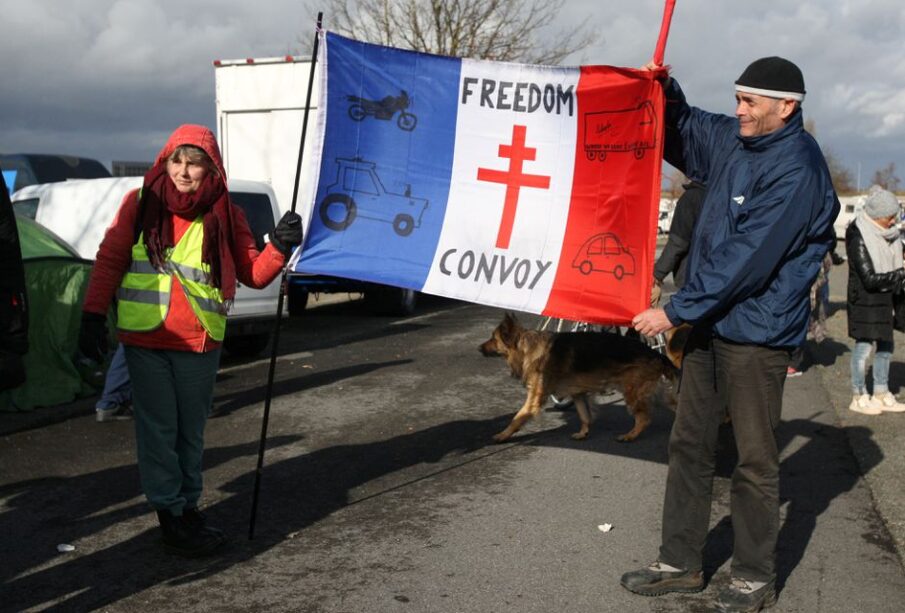 Demonstrators protesting against coronavirus disease (COVID-19) restrictions as part of "European Freedom Convoy 2022" wait in a parking lot, where police escorted them earlier as Brussels authorities said the parking post located in Grimbergen, in the outskirts of Brussels, is the only area in the region where participants can gather, in Brussels, Belgium, February 14, 2022. REUTERS/Clement Rossignol

About 500 cars and campervans arrived in Brussels on Monday, mainly from France, in a convoy to protest against coronavirus restrictions, Brussels mayor Philippe Close said.

The vehicles were barred from the city. Police directed them to a parking place on the outskirts of Brussels, from where protesters continued on foot to a square in the city centre and the area housing European Union institutions.

Reuters reporters saw around 150-200 protesters in the city centre and a similar number in the European quarter.

The mayor told Belgian LN24 television the protest, inspired by “Freedom Convoy” demonstrators who have gridlocked the Canadian capital with trucks, had no permit from the Brussels authorities, no leader and had made no demands.

Philippe, a French protester from the city of Valenciennes who had earlier protested in Paris, told reporters pandemic restrictions were only part of his problems.

“I came particularly for our children’s future. I don’t see how my children can live in the world as it is now. Freedom is swept aside, there’s more and more poverty. Even when you work, when the 15th of the month comes round, you haven’t got enough to live on,” he said.

He said he was also protesting against the rise in energy prices and the cost of living.

A protest convoy breached police defences and drove into central Paris on Saturday, snarling traffic around the Arc de Triomphe and on the Champs Elysees.

Protests began in January with Canadian truckers opposing a vaccinate-or-quarantine mandate for cross-border drivers, but have now become a rallying point against broader COVID-19 curbs and other issues.

An Israeli protest convoy drove along the main highway linking Tel Aviv and Jerusalem on Monday.

Russia says it will keep talking for now as Ukraine hints at ...