The Times of Earth, International Edition
0
558 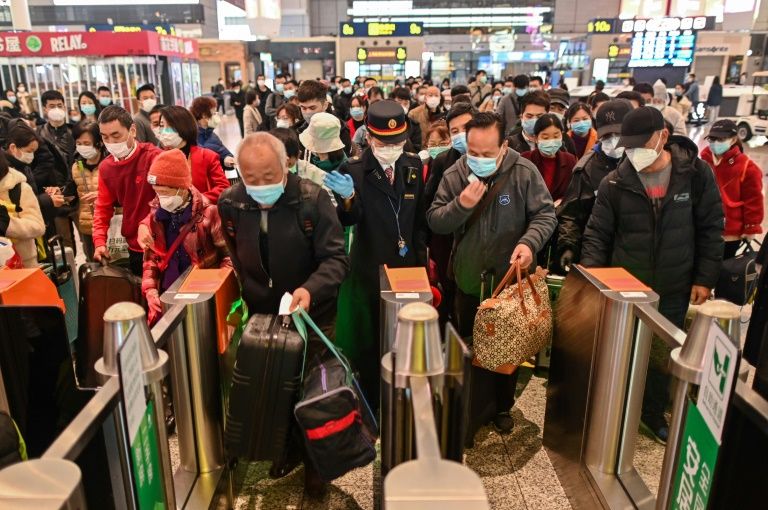 People are now allowed to enter Wuhan by train, and many trains arriving Saturday had been fully booked days in advance (AFP Photo/Hector RETAMAL)

Trains packed with thousands of passengers arrived in Wuhan Saturday as the Chinese city that was Ground Zero for the global coronavirus pandemic partly reopened after months in lockdown.

Returnees, some wearing two face masks, latex gloves and protective suits, were greeted at the railway station by staff in similar anti-virus gear — a grim reminder that while the city was emerging from isolation, it was still far from normal.

“As the train neared Wuhan, my child and I were both very excited,” a 36-year-old woman told AFP. She and her daughter had been away from her husband for nearly 10 weeks.

“It felt like the train was moving faster than before, and my daughter said the driver must know we really want to go home.-

“She rushed towards her father, and watching them from behind I couldn’t help but cry,” she added.

Wuhan, where the contagion was first detected late last year, was placed under lockdown in January, with residents forbidden to leave, roadblocks ring-fencing the city’s outskirts and drastic restrictions on daily life.

With the outbreak deemed under control, rules have been eased to allow people to enter the city and many trains had been fully booked days in advance.

Restrictions on residents heading out of Wuhan will not be lifted until April 8 when the airport will also reopen for domestic flights.

Travellers were allowed to leave the train station on Saturday after showing a green code on a mobile app to prove they are healthy.

Those who had been overseas were herded to reception desks to be tested for the virus as China battles to control infections brought from abroad.

A woman told AFP she was finally able to return to Wuhan after a cancelled flight two months ago left her stranded in the southern city of Guangzhou.

Elsewhere in China long lines of travellers queued up at train stations to board high-speed services back to the city.

Passengers in Shanghai had their temperatures checked by staff in goggles and masks after boarding.

Wuhan is the last area of Hubei province to see overland travel restrictions lifted, though some highways leading into the city had already reopened during the week.

“It almost feels like returning to an alien land, because I haven’t been back for more than two months,” Gao Xuesong, a worker in Wuhan’s auto industry, told AFP.

Wuhan has paid a heavy price for the outbreak, with more than 50,000 people infected and more COVID-19 deaths than any other city in China — with three more reported Saturday.

More than 2,500 people are still hospitalised with the disease, including nearly 900 “severe” cases.

Wuhan initially struggled to contain the outbreak, but numbers have fallen dramatically in recent weeks.

Official figures show there have been fewer than 20 new cases across the province in the past fortnight.

Life in the city is slowly returning to normal. Most of the subway network restarted on Saturday, while some shopping centres will open their doors next week.

Banks have reopened and bus services resumed but residents have been warned against unnecessary travel, especially those over 65.

A study this week found the lockdown in Wuhan succeeded in stopping the fast-spreading virus in its tracks — but cautioned against opening up the city too soon.

Communities were still blocked off Saturday, with streets mostly quiet.

“The sound of my suitcase wheels rolling seemed exceptionally loud,” one Weibo user wrote after returning to the city.

A tattered sign dated January 23 — the day Wuhan ground to a halt — hung on one shopfront, announcing the closure of all branches for a week.

More than two months later it was still shuttered.

Liu Dongru, of the Hubei Health Commission, warned Friday that although parts of Wuhan had been reclassified as “low-risk” areas, work to control the virus needed to continue.

“Zero reported cases does not equal zero risk,” he said.