The Times of Earth, International Edition
0
998 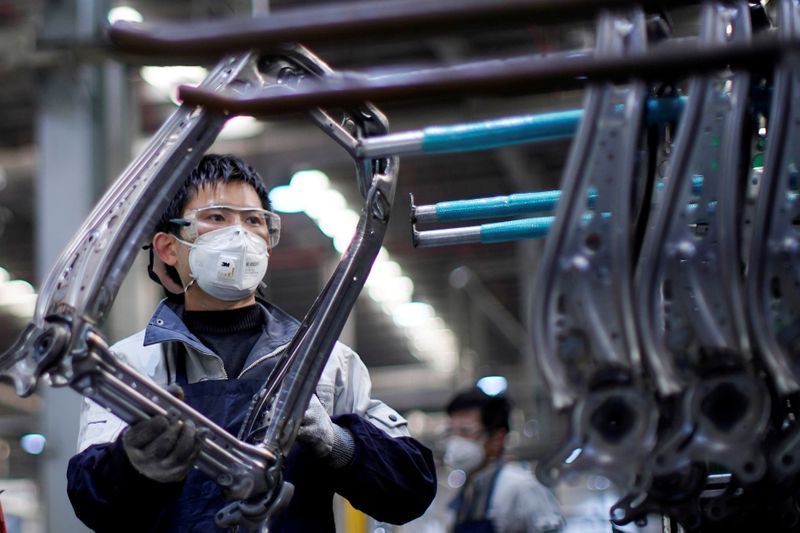 China’s economy likely returned to modest growth in the second quarter after a record contraction, as lockdown measures ended and policymakers announced more stimulus to combat the shock from the coronavirus crisis, according to a Reuters poll.

The world’s second-largest economy likely grew 2.5% in April-June from a year earlier, reversing a 6.8% decline in the first quarter – the first contraction since at least 1992 when official quarterly gross domestic product (GDP) records started, the poll showed.

But the expected growth rate would still be the weakest expansion on record.

Forecasts by 55 analysts polled by Reuters ranged from a

3.1% contraction in gross domestic product (GDP) to a 4.0% expansion in the second quarter, reflecting uncertainty over the pace of recovery.

China’s services sector, which is dominated by smaller companies, has not rebounded as quickly as industrial production, though there are some signs that consumer confidence is gradually improving.

On a quarterly basis, GDP is expected to have grown 9.6% in April-June, compared with a decline of 9.8% in the previous

The government has rolled out a raft of measures, including more fiscal spending, tax relief and cuts in lending rates and banks’ reserve requirements to revive the virus-hit economy and support employment.

Data on Tuesday showed the country’s imports in June rose for the first time this year as stimulus boosted demand for building materials, while exports also edged up as overseas economies reopened after lockdowns.[nL3N2EK1HM]

While China’s economy is showing a steady recovery, a hard battle still lies ahead as the situation remains severe both at home and abroad, state radio quoted Premier Li Keqiang as saying on Monday. [nL3N2EK2DQ]

Analysts polled by Reuters expect industrial output to grow 4.7% in June from a year earlier, quickening from a 4.4% rise in May, while retail sales were seen rising 0.3%, versus a 2.8% fall in May. Retail sales have slumped for five months in a row.

Fixed-asset investment is forecast to fall 3.3% in the

first six months from a year earlier, easing from a 6.3%

slide in the first five months, according to the poll.

Central bank governor Yi Gang has said China would keep financial system liquidity ample in the second half but would need to consider withdrawing support at some point, raising questions among investors over when it may start dialing down stimulus.

Still, analysts expect policymakers to maintain support for the economy for a while longer to ensure the recovery remains on track, despite a rise in overall debt levels.

Tang Jianwei, senior economist at Bank of Communications, expected the central bank to dole out 1-2 more targeted reserve requirement cuts and another 20 basis points of cuts in the interest rate on the medium-term lending facility in the second half.

Credit growth is also expected to remain strong. New bank lending hit a record 12.09 trillion yuan ($1.72 trillion) in the first half of the year. [nL3N2EJ0HO]

Tang expected the economy to grow around 2.5% this year.

The International Monetary Fund has forecast an expansion of 1.0% for China for the full year, the only major economy expected to report growth in 2020.