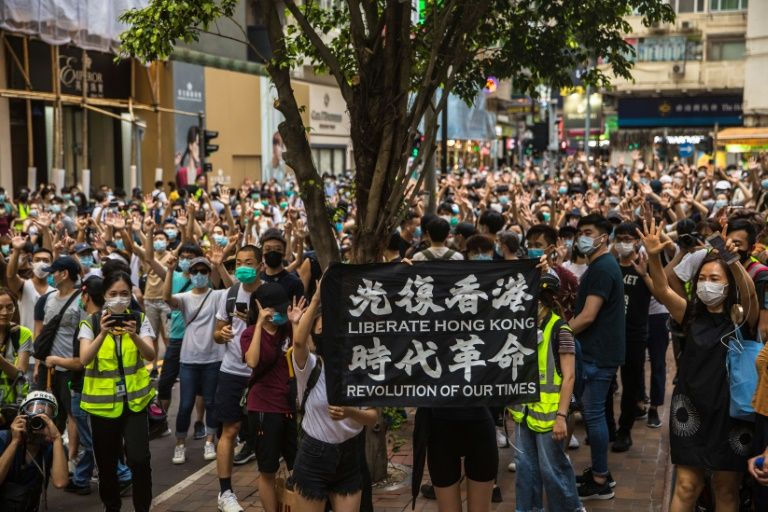 The Bar Association -- which represents the city's barristers -- issued a scathing critique of the law, saying it dismantles the legal firewall that has existed between Hong Kong's judiciary and China's Communist Party-controlled courts (AFP Photo/DALE DE LA REY)

China promised Thursday to take countermeasures against Britain if it presses ahead with plans to extend citizenship rights to Hong Kongers after Beijing imposed a sweeping security law on the restless financial hub.

Beijing has faced a groundswell of criticism from primarily Western nations over its decision to impose a law outlawing acts of subversion, secession, terrorism and colluding with foreign forces.

That includes from the United States, where Congress on Thursday dialled up the pressure by passing tough new sanctions that target banks over infringements on Hong Kong’s autonomy.

Hong Kong’s influential Bar Association published a new legal analysis warning that the wording of the law — which was kept secret until Tuesday — undermines the city’s independent judiciary and stifles freedoms.

Britain has said the law breaches China’s pre-handover “One Country, Two Systems” promise to grant residents key liberties — as well as judicial and legislative autonomy — until 2047.

It has responded by announcing plans to allow millions of Hong Kongers with British National Overseas status to relocate with their families and eventually apply for citizenship.

“We will live up to our promises to them,” foreign secretary Dominic Raab told parliament.

That move has infuriated Beijing, which says Britain promised not to grant full citizenship rights to Hong Kongers ahead of the 1997 handover.

“If the British side makes unilateral changes to the relevant practice, it will breach its own position and pledges as well as international law and basic norms governing international relations,” China’s embassy in London said Thursday.

“We firmly oppose this and reserve the right to take corresponding measures,” it added.

Britain is not alone in announcing plans to offer Hong Kongers sanctuary or increased immigration rights as fears multiply over the semi-autonomous city’s future under the new law.

Taiwan has opened an office to help Hong Kongers wanting to flee, while a proposed bill in the United States offering sanctuary to city residents has received widespread bipartisan support.

US lawmakers have also fast-tracked the Hong Kong Autonomy Act, passed Thursday, which targets Chinese officials and the Hong Kong police, making US sanctions against them mandatory if they are identified in two consecutive government reports as working to impede Hong Kong’s freedoms.

Crucially, the act would punish banks — including blocking loans from US institutions — if they conduct “significant transactions” with individuals identified as infringing on the city’s autonomy.

Beijing says the law is needed to quell seething pro-democracy protests in Hong Kong and restore order after a year of political unrest.

But critics fear it will usher in a new era of political repression given similar laws are routinely used to crush dissent on the Chinese mainland.

The law has sent fear coursing through the city and rattled the legal community in a business hub that has built its reputation on the independence and reliability of its courts.

The Bar Association — which represents the city’s barristers — issued a scathing critique of the law, saying it dismantles the legal firewall that has existed between Hong Kong’s judiciary and China’s Communist Party-controlled courts.

The new national security offences were “widely drawn”, the group said, and “are capable of being applied in a manner that is arbitrary, and that disproportionately interferes with fundamental rights, including the freedom of conscience, expression and assembly”.

It also criticised “the total absence of meaningful consultation” with Hong Kongers before the law was passed.

One of Hong Kong’s most prominent young democracy activists, Nathan Law, announced on Thursday he had fled overseas and will “continue the advocacy work on the international level”.

The revelation came as Hong Kong’s local government confirmed that a popular protest slogan used over the last year was now illegal.

“Liberate Hong Kong, Revolution of our Times” has become a clarion call for pro-democracy protesters over the last year.

It could be heard on the streets as thousands defied a protest ban on Wednesday — the anniversary of Hong Kong’s return to China — in some of the worst unrest in months.

Most of those arrested were carrying flags or leaflets advocating for Hong Kong independence.

The security law is controversial because it radically increases Beijing’s control over the city.

China says it will have jurisdiction over some cases and has empowered its security agents to operate openly inside Hong Kong for the first time, unconstrained by local laws.

Some trials will be held behind closed doors and without juries, while local police have been granted sweeping surveillance powers that no longer need judicial sign off.