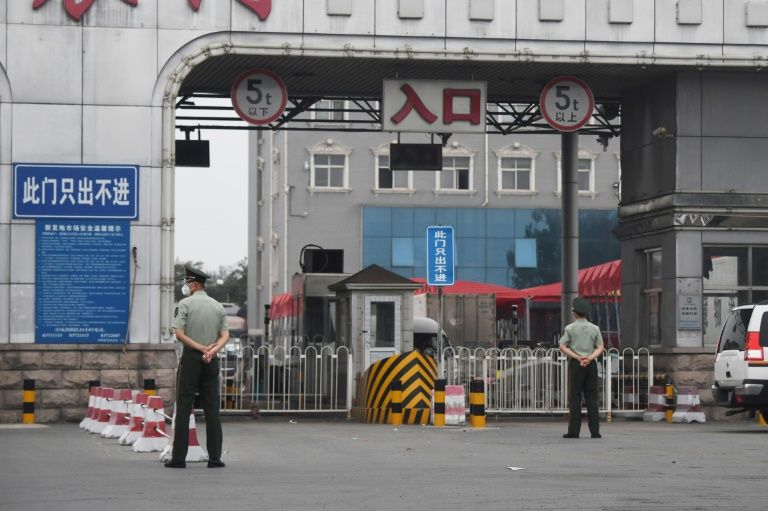 Chinese officials have closed the Xinfadi wholesale market, which has been linked to a new cluster of coronavirus cases (AFP Photo/GREG BAKER)

China reported 57 new cases of the coronavirus on Sunday, the highest daily figure since April, as concerns grew about a resurgence of the disease.

The domestic outbreak in China had been brought largely under control through strict lockdowns that were imposed early this year — but a new cluster has been linked to a wholesale food market in south Beijing.

The National Health Commission (NHC) said 36 of the new cases were local transmissions in the capital, and Beijing health officials said later that all three dozen were linked to the Xinfadi market.

The other two domestic infections reported Sunday were in northeastern Liaoning province and were close contacts of the Beijing cases.

The new cluster has prompted fresh lockdowns with people ordered to stay home in 11 residential estates near the market which supplies most of the city’s fresh produce.

One of Sunday’s new cases was a 56-year-old man who works as an airport bus driver and had visited the Xinfadi market before falling ill, the state-run People’s Daily reported.

He developed a fever a week later and was diagnosed with COVID-19, the newspaper said.

The meat section of the huge, sprawling market was closed Sunday and AFP reporters saw hundreds of police officers and security personnel plus dozens of paramilitary police blocking access to the area.

Officials have said that everyone who works at the market and lives in surrounding neighbourhoods has to undergo testing, as well as those who have visited the market.

Companies and neighbourhood communities across the city had begun messaging staff and residents to ask about their recent movements.

A vegetable market adjacent to Xinfadi was open on Sunday and trucks were arriving to deliver or collect stock.

One driver said he was collecting crates of mushrooms to take to supermarkets and restaurants in Beijing, his surgical mask pulled down under his chin.

“But anyway I have no choice — I am part of the lowest class of society. So I have to keep working in order to make a living.”

In nearby streets, residents were under lockdown and businesses and restaurants were closed.

A grocery store that was still selling was passing cigarettes, drinks and snacks through the railings to customers.

One resident surnamed Chen told AFP he had made several trips with his car to the entrance of the community to deliver supplies for his family.

“As soon as I finish delivering the supplies to my family members, I will go upstairs to join them,” he said.

A small wooden stepladder was propped against the gated entrance to one community, where supplies were being passed over to loved ones inside.

COVID-19 first emerged late last year in a market in the central city of Wuhan that sold wild animals for meat.

The latest outbreak in Beijing has turned the spotlight on the hygiene of the city’s food supply chain.

State-run media reported that the virus was detected on chopping boards used to handle imported salmon, and that major supermarkets had removed the fish from their stocks.

One trader surnamed Sun, selling tomatoes and cherries at a local food market in the centre of the city, told AFP there were fewer customers than normal.

“People are scared,” he said. “The meat sellers have had to close. This disease is really scary.”

Although the Xinfadi market accounts for much of the capital’s food supply, Sun said that it did not affect him as he gets his produce directly from farmers.

“Business is as usual on my stand,” a fruit and vegetable seller surnamed Liu told AFP.

And 32-year-old shopper Song Weiming said: “As long as you wear a face mask, it should be fine… Anyway, I have to buy food, right?”

City authorities have closed nine schools and kindergartens near Xinfadi, while sporting events, group dining and cross-provincial tour groups have also been stopped.

The majority of cases in recent months have been overseas nationals tested as they returned home.

The 19 other infections reported on Sunday were all imported cases, including 17 travellers on a China Southern flight from Bangladesh.

Owing to the high number of cases, the aviation regulator said the Dhaka-Guangzhou route would be suspended for four weeks.

The Civil Aviation Authority of China has imposed dramatic limits on flights in and out of the country and had warned routes would be halted if needed.