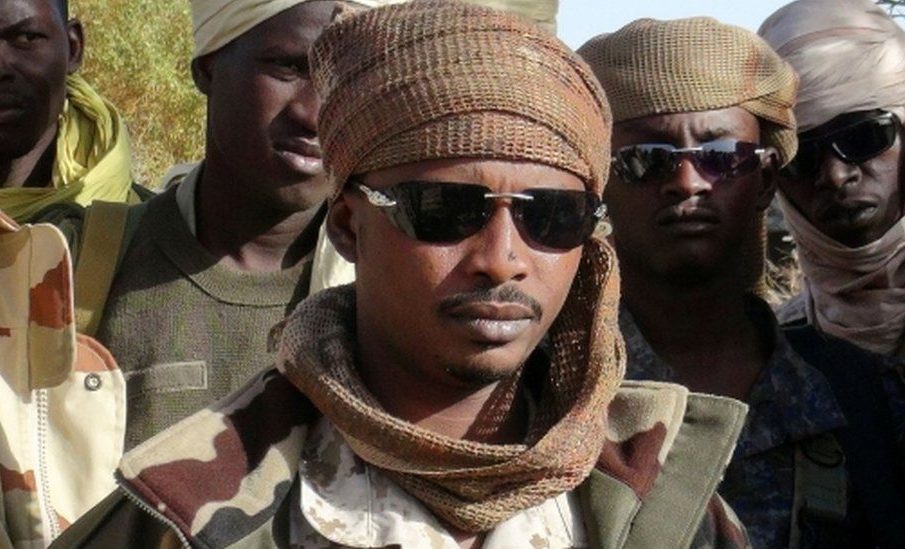 Mahamat Idriss Déby Itno, one of the late president's sons, is a 37-year-old four-star general. REUTERS

Chad faced an uncertain future on Wednesday as the son of slain leader Idriss Deby Itno took power in what the opposition called a coup and Western allies that rely on the country’s military might pleaded for stability.

Deby had ruled the impoverished desert country for three decades before the army announced his death on Tuesday from wounds suffered while leading troops in battle against rebels.

The shock demise of the 68-year-old led to immediate concerns of a power vacuum in Chad, which sits at the heart of the troubled Sahel region and is key to the West’s anti-jihadist efforts.

Deby’s death was announced only a day after provisional results declared him the winner of an April 11 election giving him a sixth term in office.

The outcome was never in doubt, with a divided opposition, boycott calls, and a campaign in which demonstrations were banned or dispersed.

Allies of the late leader moved swiftly to assure power remained in their hands, installing Deby’s 37-year-old son Mahamat Idriss Deby as president and head of a transitional military council while dissolving parliament and the government.

They tore up Chad’s constitution and established a “Transition Charter” that lays out a new basic law for the country of 16 million people that spans western and central Africa.

The charter issued Wednesday proclaimed that Mahamat, a career soldier like his father who had been head of the powerful presidential guard, will “occupy the functions of the president of the republic” and also serve as head of the armed forces.

The transition period is meant to last 18 months and lead to democratic elections, though it can be extended once.

Chad’s main opposition parties were unconvinced, denouncing an “institutional coup d’etat” in a statement and calling on citizens “not to obey illegitimate decisions” by the military council.

Beyond that, the threat remained from rebels who launched an incursion into the country’s north from Libya on the day of the April 11 election despite army claims they had been defeated.

The rebel group, known as FACT, told AFP on Tuesday it would pursue its offensive after a pause for Deby’s state funeral on Friday.

Gun-toting soldiers in fatigues and members of the red-bereted presidential guard were seen patrolling the capital in the aftermath of Deby’s death.

But on Wednesday, banks, markets and most shops were open while the national flag flew at half-mast on public buildings.

For Western countries, particularly former colonial power France, the death of Deby meant the loss of their staunchest ally in the fight against jihadists in Africa’s Sahel, where myriad Islamist extremist groups operate.

Deby had in the past gone to the frontlines to lead troops into battle himself, including during a 2020 raid against the Boko Haram extremist group.

France, whose President Emmanuel Macron will attend Deby’s funeral, as well as the European Union have called for a peaceful transition limited in timeframe.

UN chief Antonio Guterres said Deby was a “key partner” and had made significant contributions to help “combat terrorism, violent extremism and organised crime in the Sahel”.

The United States meanwhile urged a peaceful transition that abides by the constitution — a demand that has been ignored.

Beyond consolidating power, the military council had also closed Chad’s borders on Tuesday before reopening them on Wednesday. A curfew was relaxed but will remain in place between 8 pm and 5 am.

Some analysts expressed concern over whether Deby’s death could unleash new violence and said divisions within Chad’s powerful security apparatus could emerge, particularly with an inexperienced strongman at the helm.

The late leader’s demise came only days after the army had claimed a “great victory” against fighters from FACT, or the Front for Change and Concord in Chad.

The military said Monday it had killed more than 300 rebels and captured 150 others, with the loss of five soldiers — without mentioning Deby’s injuries.

“Chad is at a critical security crossroads for the whole of the African continent and for many years now has been not just a staunch Western ally but an effective security partner,” said Cameron Hudson, a senior fellow and Africa expert at the Atlantic Council think-tank.