The Times of Earth, International Edition
0
302 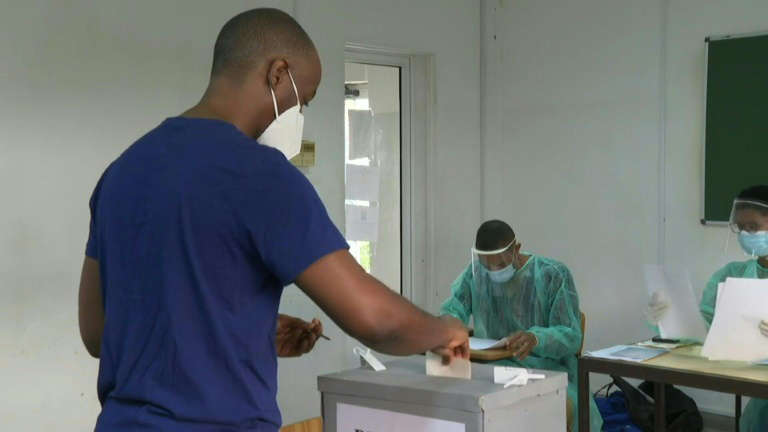 Voters in Cape Verde, a bastion of democracy in Africa, go to the polls for parliamentary elections after a campaign dominated by the Covid pandemic and its impact on a tourism-dependent economy. AFP

Voters in Cape Verde, a bastion of democracy in Africa, began casting their ballots Sunday after a campaign dominated by the Covid pandemic and its impact on a tourism-dependent economy.

Voting began at 0800 GMT and polling stations are scheduled to remain open until 1900 GMT, with just over 392,000 people registered to vote.

In Praia, queues of voters had already began forming early in the day in front of schools serving as polling stations, AFP journalists observed.

“The priority for me is to re-elect the government, fight Covid and develop the economy and tourism,” said Luis Leit, 44, after voting in the capital.

Results are expected overnight Sunday, and neither of the two leading parties has been tipped to win a clear victory.

With foreign tourism accounting for roughly a quarter of the economy and visitors unable to come owing to global pandemic restrictions, Cape Verde, with a population of 550,000, was plunged into a historic recession in 2020, when output shrank by 14.8 percent.

Prime Minister Ulisses Correia e Silva’s Movement for Democracy (MpD) is being closely contested by the African Party for the Independence of Cape Verde (PAICV), a socialist party led by Janira Hopffer Almada.

She hopes to become the first woman to lead the former Portuguese colony, and a supporter who presented himself as a jurist named Carla told AFP he wanted Almada to fight corruption, even if the country has a good reputation in that area.

Both major parties pledged measures to provide wide access to Covid-19 vaccinations and to diversify the economy.

Although it lies around 600 kilometres (375 miles) off the coast of Senegal, Cape Verde has witnessed a surge in coronavirus cases.

With 189 cases per 100,000 inhabitants, the country had the highest rate in Africa according to the Africa Centres for Disease Control and Prevention for the period from April 5-11.

With neither major party set to be an outright winner, four smaller parties are also vying for a chance to have their say.

In 1990, one-party rule in Cape Verde was swept away, and the first multi-party elections were held the following year.

In 2016, the MpD ended the PAICV’s 15-year run with a historic victory, gaining 40 of the 72 seats in the single-chamber parliament, the National Assembly.

Cape Verde has a semi-parliamentary system in which the prime minister wields executive power while the president plays the part of arbitrator in the event of intractable disputes.

Elections for the presidency take place on October 17.

In a continent marked by political unrest, coups or monolithic rulers who have been in power for decades, the tiny Atlantic archipelago stands out.

It ranks just behind Mauritius as the most democratic country in sub-Saharan Africa in the Economist Intelligence Unit’s 2020 Democracy Index.