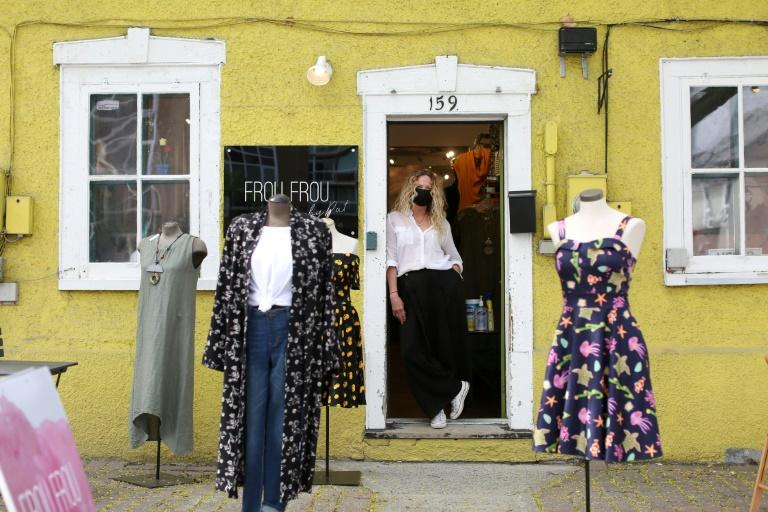 Boutique owner Pat Phythian stands in the doorway of her as she waits for customers Ottawa, Ontario, as Canada's most populous province allows stores with street access to reopen after two months of coronavirus lockdown (AFP Photo/Dave Chan)

In Ottawa’s ByWard Market neighborhood, shopkeepers were busy readying for an influx of shoppers, dusting off wares and adjusting to new rules.

“I’m smiling behind the mask,” declares the owner of a clothing store in the popular outdoor market, which was permitted to reopen Tuesday along with many shops across Canada as authorities began easing a two-month lockdown.

Ontario — Canada’s most populous province — is allowing stores with street access to reopen, along with hospital surgery rooms, dog parks and golf courses.

Pat Phythian, owner of Ottawa clothing store Frou Frou, said she was “eager to get back to work” after two months off.

The lockdown was “so boring,” she told AFP.

Like others, Phythian also took a financial hit over the temporary closure of her store.

But, she added, “I just really missed the people.”

“I’m so happy you’re back. We missed you,” says a passerby.

Standing at the door of her shop, Phythian asks Paul Clarmont — who sells vintage clothes next door — for help figuring out regulations in this new retail landscape: can she set up a table and two chairs out front for customers, or only one chair?

“I don’t want to get fined,” she comments.

Each of Canada’s 13 provinces and territories is lifting restrictions at different paces and to varying degrees.

British Columbia allowed restaurants and pubs to reopen on Tuesday, for example, while Saskatchewan went further, giving the greenlight to shopping malls, barbers and farmers’ markets.

Hardest-hit by the pandemic, Quebec’s largest city Montreal won’t allow retailers to open until next week. The province has recorded nearly half of all 80,000 COVID-19 cases and 6,000 deaths in Canada.

At the entrance to Frou Frou, there are complimentary wipes and hand sanitizers on a table.

A plexiglass shield for the checkout counter hasn’t arrived yet; the latest FedEx delivery estimate is 5.00 pm.

Phythian says she’s torn about asking customers to wear masks, which is recommended but not a rule. She has a few available to sell if they don’t bring their own, but says: “It’s like selling water during a drought.”

Only three shoppers will be allowed in her store at a time.

Taped Xs on the floor indicate to customers where they should stand to stay six feet apart, per social distancing guidelines.

Customers wishing to try on clothes will prove troublesome, as handled items must be put away for 72 hours before being put back on racks, to reduce risk of virus transfer.

“For a small shop like mine, that’s a challenge. I only have one size in each item, it’s not like a big store with 20 size 6s or size 8s,” Phythian says.

Helping with fittings may also be problematic: “Doing up a button, or adjusting a garment so that it fits better, this normally involves a lot of touching.”

Next door, Clarmont is overheard telling his first potential post-pandemic customer that he has “some new Hawaiian shirts in stock, if you’re interested.”

At the other end of the row of shops, Adorit owner Emma Inns is working up a sweat setting up for her reopening.

“My life is complete chaos,” she says, explaining that her husband has been absent a lot recently as he is a policeman — an essential worker.

She brought her two- and four-year-old girls and the family dog to the store, as her daycare was also shut down during the pandemic.

Her oldest child is running around the store with no pants, adding to the frenzy.

“Somebody just peed her pants,” Inns explains, before quipping: “I’m sure that’s not very sanitary.”