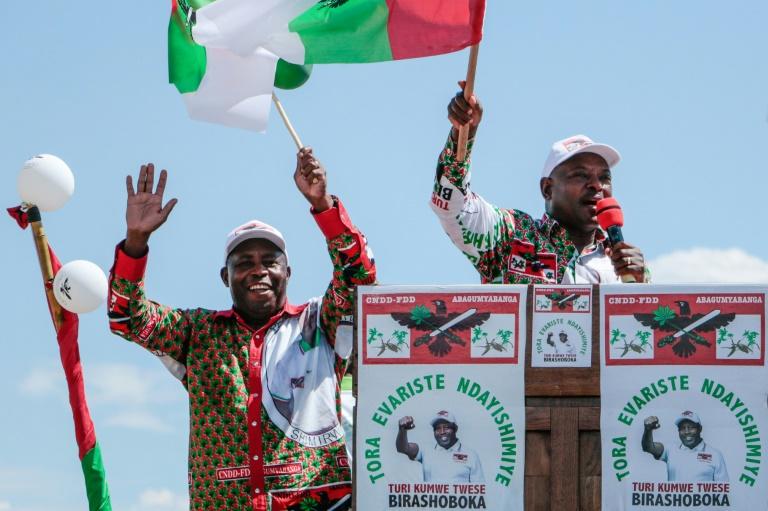 Tense elections to replace Burundi’s long-ruling president got underway on Wednesday despite a coronavirus outbreak that the East African nation has largely ignored.

The vote comes after five years of turmoil sparked by President Pierre Nkurunziza’s bid for a third term, which unleashed unrest that left at least 1,200 dead and saw 400,000 flee the country.

Just before voting started, social networks were cut off except for access by virtual private network.

Elections are also being held for parliamentarians and local councillors, who in turn appoint the members of the Senate.

“I am happy to vote for the candidate of my choice today, even if I am afraid of what is happening because social networks were cut,” said primary school teacher Patrice, 30, who voted in northern Ngozi.

“It is important because after 15 years of Nkurunziza, it is time for change. He did good and bad things…. today I want (Rwasa’s) CNL to win because the country needs new blood”.

However ruling party supporter Gertrude, who voted in central Mwaro province, said she would vote for Ndayishimiye “so that he can continue the legacy of our president Pierre Nkurunziza… and beat poverty”.

Burundi has a long history of ethnic violence between its Hutu and Tutsi communities and saw several presidents assassinated or ousted after independence from Belgium in 1962.

It is listed by the World Bank as one of the three poorest countries in the world.

The onset of turmoil in 2015 worsened the situation for many, as traditional donors cut ties.

There then followed two years of recession followed by paltry growth, and the economy now faces potential fallout from the coronavirus pandemic.

Unlike Ethiopia, which in March postponed its August general elections because of the virus risk, Burundi pushed ahead with the vote.

It has not imposed any movement restrictions on its 11 million people, as other countries in East Africa have done, and large crowds gathered at campaign rallies.

Ndayishimiye and other officials have insisted God is protecting Burundi.

Only 42 cases and one death have officially been recorded.

However, doctors accuse the government of minimising the scale of the outbreak and residents of Bujumbura have told AFP of mysterious deaths from respiratory problems and fever.

The campaign was marked by violence and arbitrary arrests — the kind that has persisted in the shadows since the 2015 poll — and observers expected a bitter contest between the two frontrunners.

Ndayishimiye is a party veteran who like Nkurunziza, fought for the ethnic Hutu rebellion during the country’s 1993-2006 civil war with the minority Tutsi-dominated army. The war left some 300,000 dead.

Rwasa, 56, was a leader of the oldest ethnic Hutu rebel movement, the Palipehutu-FNL, one of the two biggest armed opposition groups in the war.

In the eyes of the majority Hutu — 85 percent of the population — Rwasa has as much legitimacy as a presidential candidate as his rival.

“The people won’t let their victory be stolen,” warned Rwasa, after the ruling party made clear it expected no other outcome than a resounding win.

Nkurunziza’s decision to step aside came as a surprise after constitutional changes in 2018 opened the possibility for him to stay in office until 2034.

In January legislators passed a law offering a golden parachute to outgoing presidents, including a luxury villa and a one-off sum equivalent to more than half a million dollars.

The outgoing president, who has ruled for 15 years, was in February named the “supreme guide for patriotism” and he is expected to retain an influential role if the ruling CNDD-FDD stays in power.

While Ndayishimiye is considered the frontrunner, observers highlight the massive crowds mobilised by Rwasa during his campaign.

“There is a phenomenon of despair, a feeling of ‘anything but the CNDD-FDD’, and Rwasa is riding this wave,” said International Crisis Group (ICG) expert Onesphore Sematumba.

The government has refused any observers from the UN or the African Union, accusing the latter of being too close to the opposition.

Polls close at 1400 GMT, with results expected by next Monday or Tuesday.