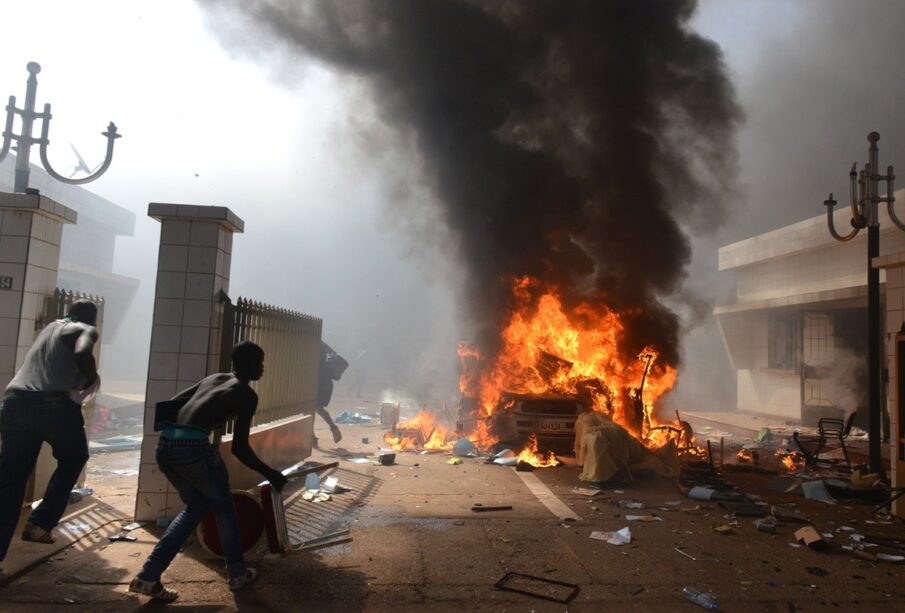 Police fired tear gas in Burkina Faso’s capital on Saturday during a demonstration against the government’s failure to stop a wave of violence by Islamist militants.

Opponents of President Roch Kabore called for renewed protests in response to a recent surge of attacks in the West African country, including one by al Qaeda-linked militants that killed 49 military police officers and four civilians.

The assault two weeks ago near the northern town of Inata was the deadliest Burkinabe security forces have suffered since an insurgency broke out in 2015 and has fuelled anger against the government and the French military forces that support it.

Since then, there have been scattered protests and demonstrators in the city of Kaya prevented the passage of a French military convoy on its way to neighbouring Niger for nearly a week.

On Saturday, military police officers launched tear gas canisters to disperse about 100 protesters who were trying to march toward downtown Ouagadougou.

After retreating to side streets, the protesters began erecting barricades and burning tyres and trash cans.

The public’s angry response to the latest attacks has unnerved the authorities, who cut mobile internet access a week ago and refused to authorise Saturday’s demonstration.

The United Nations’ special envoy to West Africa said on Thursday he was concerned about the situation in Burkina Faso and warned against any military takeover, following coups in three neighbouring countries over the past year. read more

The political instability has undermined a regional fight against militants linked to al Qaeda and Islamic State, who continue to gain ground across West Africa’s Sahel region.

Kabore promised in a speech to the nation on Thursday to end “dysfunction” within the military after reports the gendarmes at the base near Inata had run out of food weeks before the attack.