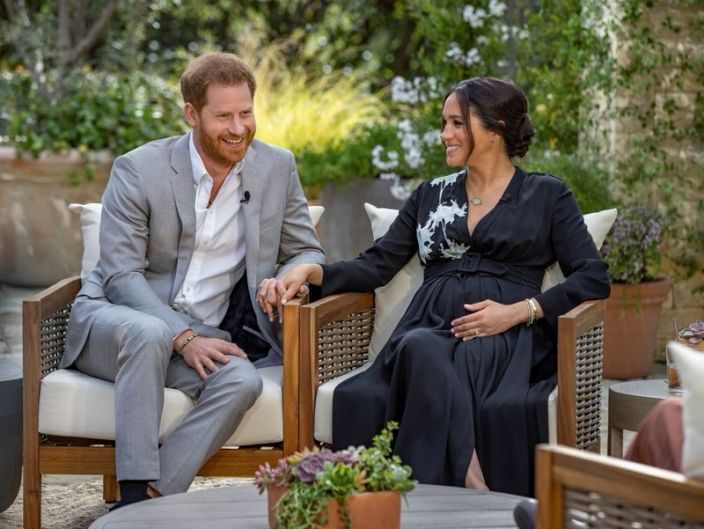 Prince Harry and Meghan, The Duke and Duchess of Sussex, give an interview to Oprah Winfrey in this undated handout photo. Harpo Productions/Joe Pugliese/ via REUTERS

Britain’s monarchy kept its silence on Tuesday, after Meghan and Prince Harry sparked a crisis by alleging that a family member made a racist remark about the colour of their son’s skin and that she was alienated to the point of contemplating suicide.

The family, led by Queen Elizabeth, 94, was grappling with how to respond to Oprah Winfrey’s TV interview, in which Harry also said that his father, heir-to-the-throne Prince Charles, had let him down.

“Worst Royal Crisis in 85 Years,” read the front page of the Daily Mirror newspaper, while the Daily Mail’s cover asked “What Have They Done?” and The Sun columnist Trevor Kavanagh questioned if the interview meant the end for the royals.

“It could hardly be more damaging to the royal family, not least because there is little it can do to defend itself,” The Times said in a lead article under the title “Royal Attack”.

“The key to the monarchy’s survival over the centuries has been its ability to adapt to the needs of the times. It needs to adapt again,” The Times said.

Elizabeth, who has been on the throne for 69 years, wanted to take some time before the palace issued a response, a royal source said.

Opponents of the monarchy said the allegations made by Meghan and Harry showed just how rotten the institution was, although some royal supporters cast Meghan as a publicity seeker with an eye on Hollywood stardom.

But the gravity of the claims raised uncomfortable questions about how the British monarchy, which survived centuries of revolution that toppled their cousins, could function in a meritocratic world.

Meghan, 39, whose mother is Black and father is white, said she had been naive before she married into royalty in 2018, but that she ended up having suicidal thoughts and considering self harm after pleading for help but getting none.

Meghan said her son Archie, who turns two in May, had been denied the title of prince because there were concerns within the royal family “about how dark his skin might be when he’s born”.

She declined to say who had voiced such concerns, as did Harry. Winfrey later told CBS that Harry had said it was not the queen or her 99-year-old husband Philip, who has been in hospital for three weeks while the crisis unfolds.

Harry said his family had cut them off financially, and his father Prince Charles had let him down and refused to take his calls at one point.

“The age of deference, already under strain, will vanish with her passing,” Kavanagh wrote, questioning whether the royal family would survive beyond the broadly popular queen.

Others pointed to the fact that the institution survived crises in the past, not least the death of Harry’s mother Princess Diana in a car crash in Paris in 1997.

“It is obviously damaging because anything that tarnishes their reputation is bad,” royal commentator Penny Junor told Reuters. “But I think overall it’s a strong institution, it’s a good institution. It has served Britain extremely well over the decades. I hope that it will survive this.”