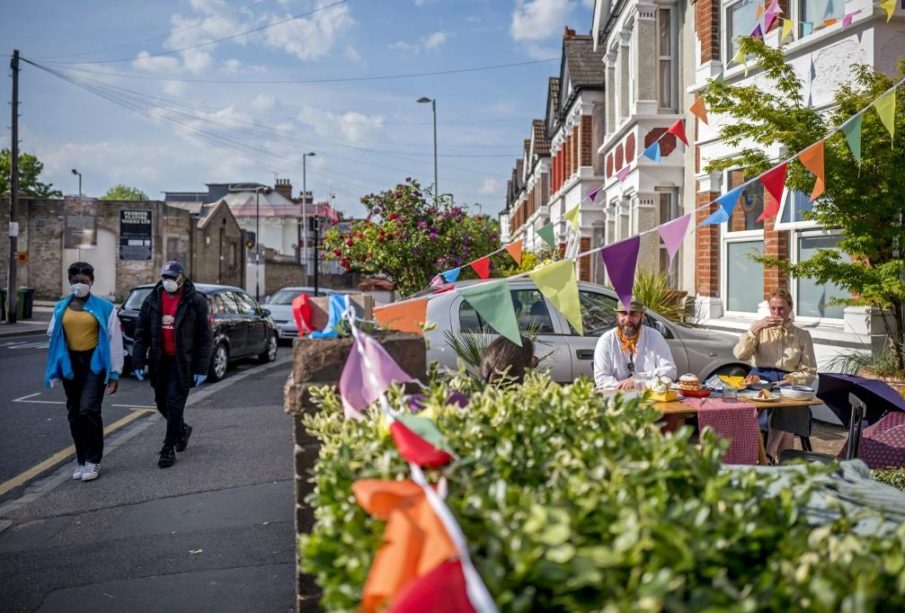 People wearing protective face masks walk past Walthamstow residents having a street party in their front garden on May 8, 2020. AFP

Britain’s coronavirus lockdown has deepened the nation’s love affair with gardening at the same time as threatening the future of traditional businesses in the sector.

Some 83 percent of homes in England have some private outdoor space, according to 2016 government figures, providing a haven for a nation stuck indoors.

But while online retailers have been inundated with orders from the UK’s estimated 23 million gardeners, bricks-and-mortar garden centres have faced a torrid time.

About 650 UK businesses produce ornamental plants, contributing £1.4 billion ($1.75 billion) to the economy and employing 15,000 people directly, according to the Horticultural Trades Association.

An HTA report at the end of April warned that one in three businesses feared they would likely be insolvent this year, with the association calling for more government help.

Prime Minister Boris Johnson looks set to announce this weekend that they can open their doors to customers from Wednesday, but for many, the lockdown could cause lasting damage.

He said his company had been hit hard because its core business is to supply garden centres, and believes the next few years will be tough for the industry.

He has put the bulk of his staff of around 100 on the government’s furlough scheme, and has faced the agony of throwing away unwanted stock.

There is also the logistical headache of how to create space to grow plants for the following season.

“It’s a bit like closing a toy shop in December,” he told AFP ahead of national Garden Day on Sunday.

“Most businesses in this industry do around 70 percent of their turnover at this time.”

But he added: “We’ll still be here one way or another. This is a big knock and will take some getting over but it’s quite a resilient industry.”

The COVID-19 shutdown has also been bleak for nursery owner Royden Kemp, who said his core wholesale business has been “all but wiped out”.

Kemp, who owns Sandiacre Nurseries in southeast England, has continued to supply garden centres who run home delivery services and started an online business of his own but still saw a 75 percent drop in sales in April.

He describes the past few weeks as a “seismic shock for the industry”, predicting there will be many casualties.

But he said: “Remember, a bedding plant grower has a very resilient character and has seen many difficult spring seasons, usually due to poor weather, so don’t write us all off.”

The coronavirus shutdown has been a different experience for garden designers Nina Baxter and Jo Thompson, who have worked together on Thompson’s award-winning gardens at London’s Chelsea Flower Show.

Each saw demand for their own businesses drop at the start of the lockdown but said it had since picked up, and they are now joining forces to launch a new bulb design and supply business together.

“People are in their own gardens all the time,” said Thompson, who has offices in London and southern England.

“Even if they’re at home and not outside, they’re looking at their gardens and so we have had more enquiries than I’ve ever had in a short space of time.”

They work remotely with photos and videos and are able to maintain the social distancing required under the lockdown rules.

Thompson said gardening is “in the blood” of the British.

At the beginning of the lockdown, “I think there was a sort of ‘Dig for Victory’ mentality, growing your own food”, she said, referring to the World War II campaign.

“But I think now more and more, people are starting to realise the mental health benefits.

Baxter, based just outside London, said she hopes the enforced break in normal routines will have given people a chance to reconnect with nature.

With holidays abroad looking unlikely this year, they are also “facing a long summer ahead of them and realising ‘we need to do something about the garden now’,” she said.

More than 1,000 queue for food in rich Geneva amid virus shutdown