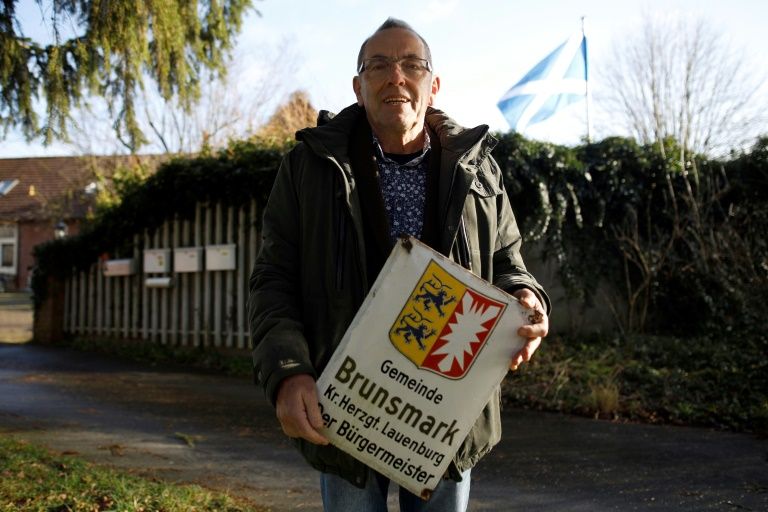 The tiny village of Brunsmark, an hour outside Hamburg in the lush north German countryside, might seem an unlikely spot to suffer a sudden Brexit shock.

But Britain’s departure from the European Union means Iain Macnab, a Scotsman comfortably settled in the area for decades, must give up the mayor’s seat he has held for 12 years.

“I don’t have a vote in Germany anymore, and if you have no vote… you cannot be mayor,” he tells AFP in his office squeezed under the rafters.

His political participation dropped from “100 to zero at midnight” on January 31, Britain’s final day of EU membership, the 70-year-old says.-

What’s more, Macnab has lived outside the UK for more than 15 years — the cutoff point for voting from abroad in elections to the London parliament.

“It’s struck me as very strange to suddenly know you have no vote anymore… You’re completely impotent as far as democracy is concerned,” he explains.

Married to a German woman, with whom he has two children, Macnab has lived in Brunsmark — which has a population of just 150 — for 28 years.

Originally from Achiltibuie in Scotland’s far northwest, he didn’t rush — as many other Brits in Germany did — to secure citizenship following the 2016 referendum vote to quit the EU.

“I have considered it a couple of times,” he acknowledges, but never acted on the idea.

Macnab is no fan of Brexit, arguing that “the EU definitely has its negative points… but if you are in it, you can change it.”

He believes that his job as mayor has been “to mediate between reality and stupid laws” — including those issuing from the “huge bureaucracy” in Brussels.

The day before Brexit, Macnab sealed the end of his term in the voluntary post, handing over to his deputy with little ceremony at a meeting of the village council.

“You went to the door and thought, God, after 12 years, this is the last committee meeting. That was the time I really felt something, it’s a bit sad.”

On the day itself, Macnab spent the evening rehearsing with his rock group the “Lucky Devils”, before sharing a few glasses of whiskey with his bandmates.

As he sniffs the bottle to savour the aroma, the low level visible in the bottle of 2008 Glenfarclas — commemorating the year Macnab was first elected — hints at a somewhat drawn-out evening.

Looking ahead, Macnab fears that Britain could break apart in the future, even feeling the first stirrings of Scottish nationalism in his own chest.

“I’m tending to look more and more at Scottish nationalism. I think I would have never done before,” he admits.

A present from his constituents just before he stepped down, the Scottish flag now waves in the wind outside Macnab’s house.

He says “the antics of, I would call it, the elite in Britain” has fuelled support for Scotland to go it alone, pointing also to the possibility that Northern Ireland could similarly break away.

Recent polls suggest that support for independence among Scots is as high as 52 percent, its highest level since 2016, when most north of the border voted to remain in the EU.

For his part, Macnab will retain from his time as mayor the positive “feeling that you are able to do something,” even if “you’ll never get any thanks”.

And a poster pinned to his door with a familiar British motto sums up the Scotsman’s attitude to his altered circumstances: “Keep calm and carry on.”