The Times of Earth, International Edition
0
621 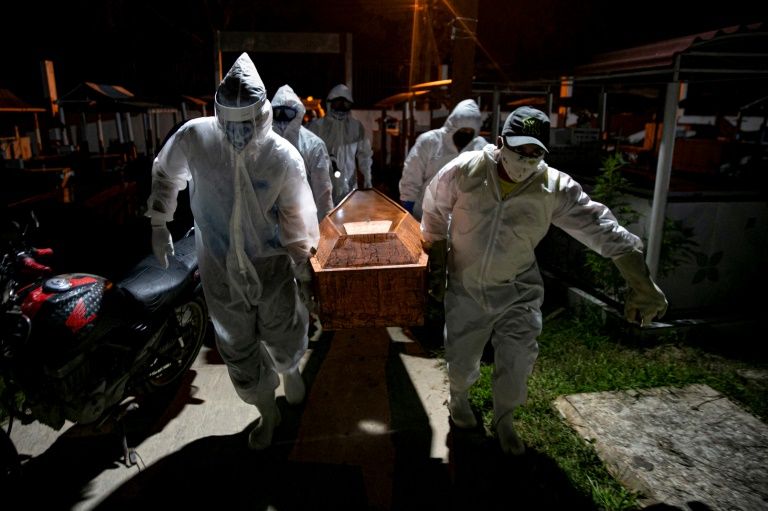 Gravediggers wearing protective clothing carry the coffin of a COVID-19 victim for burial at the Recanto da Paz Municipal Cemetery in the city of Breves, in the Brazilian state of Para on May 30, 2020 (AFP Photo/Tarso SARRAF)

Researchers in hard-hit Brazil on Wednesday said they would begin testing a coronavirus vaccine developed in Britain, while across the Atlantic European nations began reopening borders in a bid to emerge from months of devastation caused by the disease.

Authorities in Brazil — the latest frontline of the pandemic, with deaths and infections on the rise — imposed fresh restrictions in the country’s northeast after reporting “extremely high” numbers of cases.

Concern over the spread of the coronavirus in Latin America has increased even as the health crisis has eased in other regions of the world.

“The Americas continues to account for the most cases,” World Health Organization chief Tedros Adhanom Ghebreyesus said in a briefing in Geneva.

The UN body also said it would resume trials of hydroxychloroquine a week after halting them following a study in The Lancet medical journal that suggested the drug could harm COVID-19 patients.

The U-turn came after The Lancet itself cast doubt on the study after it was widely contested by scientists.

Another study published in the New England Journal of Medicine Wednesday suggested that taking hydroxychloroquine shortly after being exposed to COVID-19 does not help prevent infection in a statistically meaningful way, however.

The WHO has been holding clinical trials to find a treatment for COVID-19, which has killed more than 382,000 people and wrought vast economic damage since emerging in China late last year.

“For several weeks, the number of cases reported each day in the Americas has been more than the rest of the world put together,” Tedros said.

“We are especially worried about Central and South America, where many countries are witnessing accelerating epidemics.”

Chile’s government said it was extending a three-week shutdown of the capital Santiago and its population of seven million as the death toll there reached a new daily record.

Health officials said 87 people had died in the previous 24 hours, and nearly 5,000 new infections were recorded. Chile has now registered more than 113,000 infections and 1,275 deaths.

But outside of Latin America nations are cautiously reopening schools, beaches and businesses after months of quarantine, even as some still face rising numbers of cases.

European nations among the hardest hit by the outbreak have mostly flattened out infection curves. They have turned to the tricky task of balancing economic recovery against the risk of a second wave of cases.

Germany will plough 130 billion euros ($146 billion) into a stimulus package to kick-start an economy severely hit by the pandemic, Chancellor Angela Merkel announced.

Berlin will also ease its blanket travel warning for European nations from June 15.

But with health experts warning over reopening too quickly, some fear foreign visitors may be reluctant to travel.

“I don’t think we’ll see any foreign tourists really until the end of August or even September,” said Mimmo Burgio, a cafe owner near Rome’s Colosseum. “Who’s going to come?”

Austria announced it would scrap virus controls on all land borders, except for Italy.

Belgium will reopen its borders to travellers from the EU, Britain and members of Europe’s passport-free travel zone on June 15.

But Britain — with the second highest death rate in the world after the US at nearly 40,000 fatalities — is still advising against non-essential travel.

The race to find a vaccine meanwhile gathered pace.

Europe’s four largest economies — France, Germany, Italy and the Netherlands — are forming an alliance to speed up production of a vaccine on European soil, Dutch officials said.

Brazil said it would begin testing a vaccine being developed by Oxford University next week, the first country outside Britain to take part in the study.

The vaccine will be tested in Brazil on 2,000 health services volunteers, said the Federal University of Sao Paulo, coordinating the study.

Testing a vaccine in Brazil “is very important because we are in the acceleration phase of the epidemiological curve,” the university’s president Soraya Smaili told AFP.

Authorities imposed curfews across a vast swathe of the Brazilian state of Bahia in the country’s hard-hit northwest.

“It is necessary and urgent to impose greater restrictions, after recording extremely high (infection) rates,” in the area, said Bahia governor Rui Costa.

Brazil has the world’s second highest COVID-19 caseload after the United States, with more than half a million cases and 31,000 deaths.

In Africa, which has so far escaped the worst of the pandemic, police in Senegal arrested more than 70 people after protests tinged by violence broke out in several cities.

The country has recorded nearly 4,000 cases of coronavirus, 45 of them fatalities.