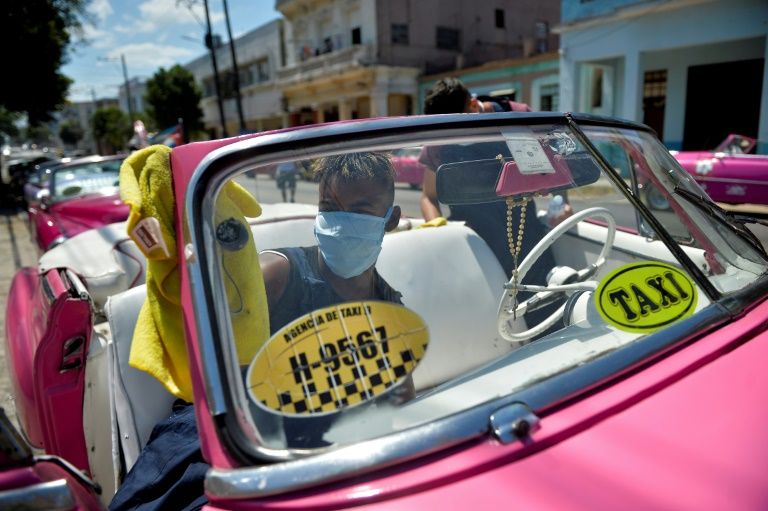 Workers of a private taxi company disinfect old American cars wearing face masks as a preventive measure against the spread of the new coronavirus. AFP

Bolivia’s interim government announced on Saturday a countrywide mandatory quarantine for 14 days to combat the spread of coronavirus in the Andean nation.

Anez said supermarkets, hospitals, banks and pharmacies would continue to operate as normal. The government would provide cash payments to needy families with children beginning in April, she said.

Bolivia has confirmed 19 cases of coronavirus.

Cuba and Bolivia announced on Friday they were closing their borders while Brazil drastically slashed its growth projections for 2020 over the coronavirus pandemic.

Latin American countries continued to ramp up measures to contain the virus outbreak with more than 30 deaths from the COVID-19 disease and total cases soaring over 3,000.

Economically crippled by US sanctions, Cuba is largely dependent on its tourism revenue.

The measure will come into effect on Tuesday and will last for 30 days. There are 60,000 tourists currently in Cuba.

Cuba has seen 21 cases with one Italian tourist dying.

More than 28,000 medical students took part in a neighborhood-by-neighborhood “active search” to stop “people who could have the illness infecting others,” said Jorge Gonzalez, dean at Havana’s University of Medicine.

The program began on Tuesday and has seen students visit already “more than a million people” which has allowed “a huge number of severe respiratory infections” to be detected, Gonzalez said.

The government drastically downgraded its growth projections for 2020 by 2.1 percent to practically zero (0.02 percent).

The economy ministry had already dropped its expectations from 2.4 percent on March 11 in an initial re-evaluation based on the impact of the deadly virus.

Brazil had only recorded 34 coronavirus cases at that time and no deaths. But the virus has accelerated since then to more than 900 cases and 11 deaths.

The Senate approved a state of calamity to free up resources to combat the virus crisis in the body’s first ever virtual session. Of the 81 senators, 75 connected by telephone or computer.

Bolivia announced it was closing its borders and suspending international, inter-departmental and inter-provincial transportation by land and river until the end of the month.

The government also said it was studying the possibility of imposing a total quarantine.

Bolivia has recorded only 15 coronavirus cases and is due to hold a general election on May 3.

However, he acknowledged the country was studying the option adding that “there needs to be different types of restrictions.”

The central bank cut interest rates by 50 points to 6.5 percent “due to the complex economic and financial situation” generated by coronavirus and the risks it poses to inflation.

Mexico has seen 164 cases with one death.

Meanwhile automakers Nissan and General Motors announced that they would suspend production in Mexico, joining Audi, Ford and Honda which had already made the same decision.

Colombia will go into compulsory general confinement from Tuesday until April 13 to stop the spread of the virus, President Ivan Duque announced in an address to the nation.

Nearly half of the population are already taking part in a full-scale isolation exercise from Friday to Monday midnight.

Duque submitted to a coronavirus test after coming into contact with a mayor who contracted the virus. Colombia has had 145 cases so far.

Guatemalan President Alejandro Giammattei announced a partial halt to industrial production in the country in an attempt to contain the spread of coronavirus.

The measure goes into force Monday but will not affect food and pharmaceutical sectors nor those “having to do with health and hygiene products,” he said in a message to the nation.

And in an indigenous village in the north of the country a supposed doctor was arrested for trying to sell a vaccine to combat the coronavirus, local media said.

No vaccine has yet been developed. Guatemala has only recorded 12 cases but one of those died.

Banks agreed to adjust the loans of people and businesses affected by the virus.

In so doing the banks acquiesced to a request from the government to reduce interest rates, extend loan terms and waive debt repayment penalties.

The second worst affected country in Central America, Costa Rica has seen 113 cases and one death.

The government has decreed “an absolute curfew” to force the population to isolate themselves in their homes and curb the spread of the virus in the poor Central American country, which has 24 cases.

President Juan Orlando Hernandez said the government would provide basic food for 30 days for about 3.2 million people most in need, about a third of the population.

The country, which has confirmed 18 cases, has suspended direct flights from Europe and established a curfew from 8:00 pm to 4:00 am. Schools and universities are closed, while sporting and cultural events have been banned.

Nearly one billion people confined to homes to curb virus