The Times of Earth, International Edition
0
183 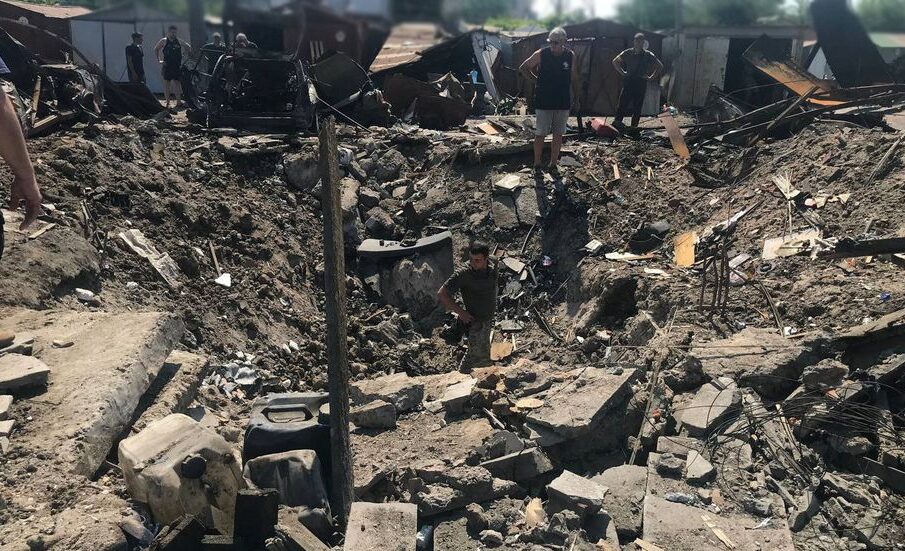 Aftermath of a missile strike, amid Russia's invasion on Ukraine, in Mykolaiv, Ukraine June 29, 2022 in this picture obtained from social media. Courtesy of Julie Akimova - news.pn/via REUTERS

Powerful explosions rocked the Ukrainian city of Mykolaiv early on Saturday, the mayor said, a day after authorities said at least 21 people were killed when Russian missiles struck an apartment building near the Black Sea port of Odesa.

Air raid sirens sounded across the Mykolaiv region, which borders the vital port of Odesa, before the blasts.

“There are powerful explosions in the city! Stay in shelters!” Mykolaiv mayor Oleksandr Senkevich wrote on the Telegram messaging app.Advertisement · Scroll to continueReport an ad

It was not immediately known what caused the explosions. Reuters could not independently verify the report.

Explosions flattened part of an apartment building while residents slept on Friday, another in a series of what Ukraine says are Russian missile attacks aimed at civilians.

In his nightly video address on Friday, Ukrainian President Volodymyr Zelenskiy denounced the strikes as “conscious, deliberately targeted Russian terror and not some sort of error or a coincidental missile strike.”Advertisement · Scroll to continueReport an ad

A Russian missile earlier this week struck a crowded shopping mall in central Ukraine, killing at least 19 people.Advertisement · Scroll to continueReport an ad

Thousands of civilians have been killed since Russia invaded Ukraine on Feb. 24 in what Moscow calls a “special operation” to root out nationalists. Ukraine and its Western allies say it is an unprovoked war of aggression.

Residents in the resort village of Serhiivka near Odesa helped workers pick through the rubble of the nine-storey apartment block, a section of which had been destroyed in Friday’s early-morning strike.

“We came here to the site, assessed the situation together with emergency workers and locals, and together helped those who survived. And those who unfortunately died. We helped to carry them away,” said Oleksandr Abramov, who lives nearby and had rushed to the scene when he heard the blast.

Serhiy Bratchuk, spokesman for the Odesa regional administration, said 21 people had been confirmed killed, including a 12-year-old boy.

The region will observe a day of mourning on Saturday for those killed during the attack, Bratchuk said.

The strike on Serhiivka took place shortly after Russia pulled its troops off Snake Island, a strategically important outcrop about 140 km (85 miles) southeast of Odesa that it seized on the war’s first day.

The chief of Ukraine’s General Staff, Valeriy Zaluzhny, accused Russia of failing to abide by its assertions that it had left Snake Island as a “gesture of good will”. On his Telegram messaging app channel, Zaluzhny said two Russian warplanes had taken off from a base in Crimea and bombed targets on the island on Friday evening.

He posted a video of what he said was the attack. Reuters could not confirm the authenticity of the video or the Russian action depicted. There was no immediate Russian comment.

Russian forces had used Snake Island to control the northwestern Black Sea and impose a blockade on Ukraine, one of the world’s biggest grain exporters.

Moscow denies it is to blame for a food crisis, which it says is caused by Western sanctions hurting its own exports.

Putin met the president of Indonesia on Thursday and spoke by phone on Friday to the prime minister of India, promising both major food importers that Russia would remain a big supplier of grain.

The chief of General Staff of the Russian Armed Forces, Valery Gerasimov, has inspected divisions of Russian troops involved in Moscow’s “special military operation” in Ukraine, the defence ministry said on Saturday. It was unclear whether Gerasimov had travelled to Ukrainian territory.

Russia’s stepped-up campaign of missile attacks on Ukrainian cities coincides with its forces grinding out success on the battlefield in the east, with the aim of forcing Ukraine to cede Luhansk and Donetsk provinces.

Moscow has been on the verge of capturing Luhansk since taking the city of Sievierodonetsk last week after some of the heaviest fighting of the war.

Ukraine’s last bastion in Luhansk is Lysychansk, which is close to being encircled under Russian artillery barrages.

“Private houses in attacked villages are burning down one by one,” Luhansk Governor Serhiy Gaidai said on Telegram. With such a high density of shelling, we only have time to shelter the injured. Fires simultaneously in several places. We barely have time to eliminate large-scale fires in Lysychansk.”

Pavlo Kyrylenko, governor of the Donetsk region, said four civilians were killed in the region in Russian shelling on Friday and 12 injured.

The General Staff of Ukraine’s Armed Forces reported widespread Russian shelling on Friday, including Kharkiv in the north, and an artillery attack on the positions of Ukrainian troops in the border areas of Sumy and Chernihiv.