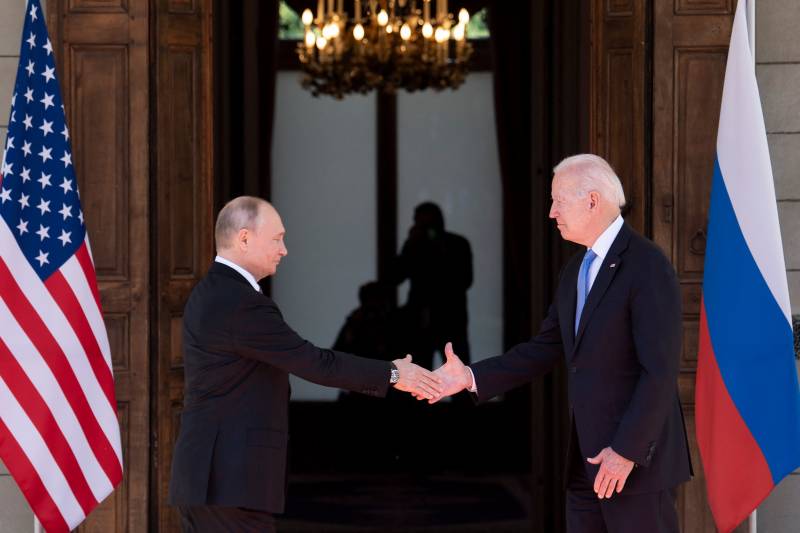 Russian President Vladimir Putin (L) shakes hands with US President Joe Biden prior to the US-Russia summit at the Villa La Grange, in Geneva. AFP

U.S. President Joe Biden and Russian President Vladimir Putin agreed on Wednesday to hold arms control and cyber-security talks, recording small gains and big differences at a first summit they both described as pragmatic rather than friendly.

The discussions at the lakeside Villa La Grange in Geneva lasted three hours – less than Biden’s advisers had said they expected – but the U.S. president said they had been intense and detailed, and that “we didn’t need to spend more time talking”.

Putin, 68, called Biden, 78, a constructive, experienced partner, and said they spoke “the same language”, but added that there had been no friendship, rather a pragmatic dialogue about their two countries’ interests.

Biden said he had told Putin “we need some basic rules of the road that we can all abide by”, adding: “I did what I came to do.”

The scheduling of separate news conferences meant there was none of the joviality that accompanied a 2018 meeting in Helsinki between Putin and Biden’s predecessor, Donald Trump, where Putin presented Trump with a soccer ball. There was also no shared meal.

In a joint statement issued after the news conferences, the two sides said the meeting showed that they were able to make progress on shared goals even in periods of tension.

Putin, who was first to brief reporters, said the meeting had been constructive, without hostility, and had showed the leaders’ desire to understand each other.

He said it was “hard to say” if relations with the United States would improve, but that there was a “glimpse of hope” regarding mutual trust. There were no invitations to Washington or Moscow.

Biden, speaking shortly afterwards, said there was “no substitute for face-to-face dialogue”, and that he had told Putin his agenda was “not against Russia” but “for the American people”.

He, too, underlined the businesslike tone, saying: “This is not about trust, this is about self-interest and verification of self-interest.” But he said there was a “genuine prospect” of improving relations.

Biden said they had spent a great deal of time discussing arms control and cyber-attacks, where he had told Putin that “critical infrastructure should be off-limits”, giving him a list of 16 strategic sectors.

And he said he believed Putin was genuinely concerned about being “encircled” and about Washington wanting to “take him down”.

In perhaps his strongest remark, Biden said the consequences would be “devastating for Russia” if jailed opposition figurehead Alexei Navalny, who has recovered from a hunger-strike to protest against his detention conditions, died.

Both men said Moscow and Washington shared a responsibility for nuclear stability, and would hold talks on possible changes to their recently extended New START arms limitation treaty.

Putin showed little appetite for compromise on a range of other issues, dismissing Washington’s concerns about Navalny, about Russia’s increased military presence near Ukraine’s eastern border, and about U.S. suggestions that unidentified Russians were responsible for a series of cyber-attacks in the United States.

Putin said Navalny had ignored the law and had known what would happen if he returned to Russia from Germany, where he had received treatment for an attempt inside Russia to kill him with poison. He also accused Kyiv of breaking the terms of a ceasefire agreement with pro-Russian rebels in eastern Ukraine.

The Kremlin leader said Russia had been the target of numerous cyber-attacks originating in from the United States.

Biden said he had raised human rights issues because it was in the “DNA” of his country to do so, and also the fate of U.S. citizens jailed in Russia.

Putin said he believed some compromises could be found, although he gave no indication of any prisoner exchange deal.

Asked about a crackdown on Russia’s political opposition, Putin said he did not want riots in Russia or a movement akin to the U.S. Black Lives Matter movement. Biden called the comparison “ridiculous”.

Arms control is, however, one domain where progress has historically been possible despite wider disagreements.

In February, Russia and the United States extended for five years their New START treaty, which caps the number of strategic nuclear warheads they can deploy and limits the land- and submarine-based missiles and bombers to deliver them.

Both sides had said in advance of the summit that they hoped for more stable and predictable relations, even though they were at odds over everything from arms control and cyber-hacking to election interference and Ukraine.

Relations have been deteriorating for years, notably with Russia’s 2014 annexation of Crimea from Ukraine, its 2015 intervention in Syria and U.S. charges – denied by Moscow – of meddling in the 2016 election that brought Donald Trump to the White House.

They sank further in March when Biden said he thought Putin was a “killer”, prompting Russia to recall Antonov from Washington for consultations. The United States recalled its ambassador soon after.

Putin said on Wednesday that he had been satisfied by Biden’s explanation of the remark.

Trump’s summit in 2018 with Putin in Helsinki had included a meeting accompanied only by interpreters, but Biden and Putin had no solo talks.

Standing beside Putin in Helsinki in 2018, Trump refused to blame him for meddling in the 2016 U.S. election, casting doubt on the findings of his own intelligence agencies and sparking a storm of domestic criticism.

Biden had already left the podium at his news conference when he turned back to emphatically correct a reporter who asked him why he was “confident” Putin would change his behaviour.

“I’m not ‘confident he’ll change his behaviour’,” he said.

Putin sees ‘a lot of issues’ at first summit with Biden