Biden agrees in principle to Ukraine summit with Putin

The Times of Earth, International Edition
0
730 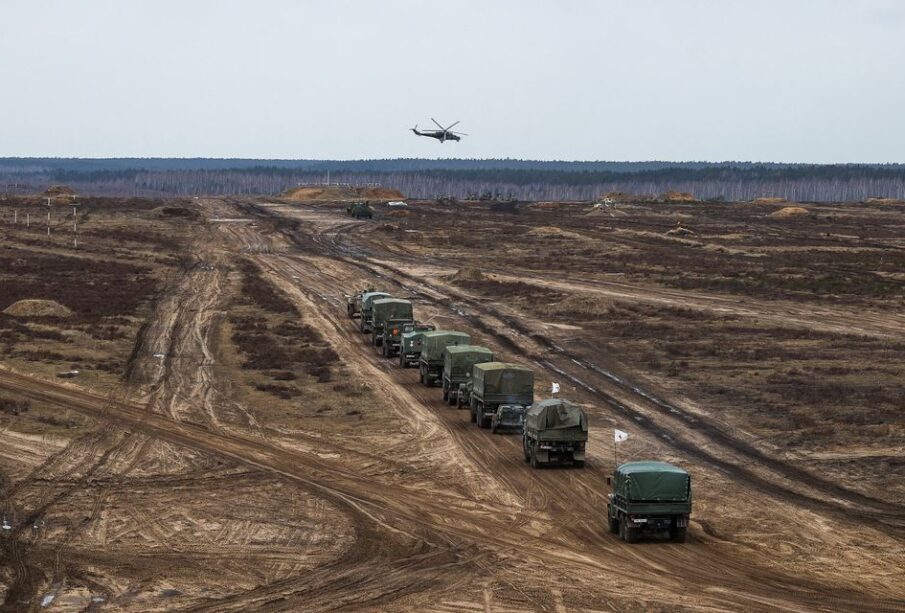 A helicopter flies over troops during the joint military drills of the armed forces of Russia and Belarus at a firing range in the Brest Region, Belarus February 19, 2022. Vadim Yakubyonok/Belta/Handout via REUTERS

U.S. President Joe Biden and Russian President Vladimir Putin have agreed in principle to a summit over Ukraine, the French leader said on Monday, offering a possible path out of one of the most dangerous European crises in decades.

Financial markets edged higher on the glimmer of hope for a diplomatic solution even as satellite imagery appeared to show Russian deployments closer to Ukraine’s border, while sounds of fighting were heard on Monday in the east, where Ukrainian government forces are fighting pro-Russian separatists.

The office of French President Emmanuel Macron said in a statement he had pitched to both leaders a summit on “security and strategic stability in Europe.” In a statement, the White House said Biden had accepted the meeting “in principle” but only “if an invasion hasn’t happened”.

“We are always ready for diplomacy,” White House Press Secretary Jen Psaki said. “We are also ready to impose swift and severe consequences, should Russia instead choose war.”

Messages seeking comment from the Kremlin and the office of Ukrainian President Volodymyr Zelenskiy were not immediately returned early on Monday.

Few details of the proposed summit, announced after a volley of phone calls between Macron, Biden, Putin, Zelenskiy, and British Prime Minister Boris Johnson, are clear.

Macron’s office and the White House said the substance of the plan would be worked out by U.S. Secretary of State Antony Blinken and Russian Foreign Minister Sergei Lavrov during their meeting planned for Feb. 24.

What role Ukraine would play in the summit, if any, was also uncertain.

A Biden administration official said in an email that the summit was “completely notional” as the timing and format had yet to be determined.

EU foreign policy chief Josep Borrell said there was a pressing need for talks to avoid war, while Germany said Russia should come back to the negotiating table.

While oil prices fell, Asian share markets pared losses and Wall Street futures rallied on news of the possible summit, Michael McFaul, a former U.S. ambassador to Russia, said he was sceptical it would happen.

“But if Biden and Putin did meet, they should invite (Zelenskiy) to join,” he said in a message posted on Twitter.

News of Macron’s proposal comes after a week of heightened tension spurred by Russia’s military buildup.

Russian forces have been massing around its neighbour since late last year, in what Western countries say is a prelude to an invasion that could come at any moment.

Russia denies any intention to invade, but nerves were further frayed when the Belarusian defence ministry announced that Russia would extend military drills in Belarus that had been due to end on Sunday.

On Sunday, Blinken said the extension of the exercises in Belarus, bordering Ukraine to the north, made him more worried that Russia was on the brink of an attack and every opportunity had to be taken to get diplomacy to work.

Belarus said Russian troops would go home from the exercises when there was “an objective need” to do so, the Interfax news agency said.

In a letter to U.N. human rights chief Michelle Bachelet, seen by Reuters, the United States raised concern that “further Russian invasion of Ukraine may create a human rights catastrophe”, including the possible rounding up and killing of opponents.

Sporadic shelling across the line dividing Ukrainian government forces and pro-Russian separatists in the east has intensified since Thursday.

Sounds of fighting were heard again on Monday, including a blast in the centre of the separatist-held city of Donetsk. The cause was not known.

Kyiv has accused pro-Russian forces of shelling their own compatriots in the breakaway region in order to blame the attacks on Ukrainian government forces.

Western countries are preparing sanctions they say would be wide-reaching against Russian companies and individuals in case of an invasion, including steps to bar U.S. financial institutions from processing transactions for major Russian banks, people familiar with the matter said.

British Prime Minister Boris Johnson told the BBC such measures could include curbs on Russian businesses’ access to the dollar and the pound.

European Commission President Ursula von der Leyen told German broadcaster ARD that Russia “would in principle be cut off from the international financial markets” and from major European exports.

Ukrainian Foreign Minister Dmytro Kuleba said it was time for the West to impose at least part of the sanctions it has prepared, but the Biden administration has declined to do so, saying their deterrent effect would be lost if used too soon.