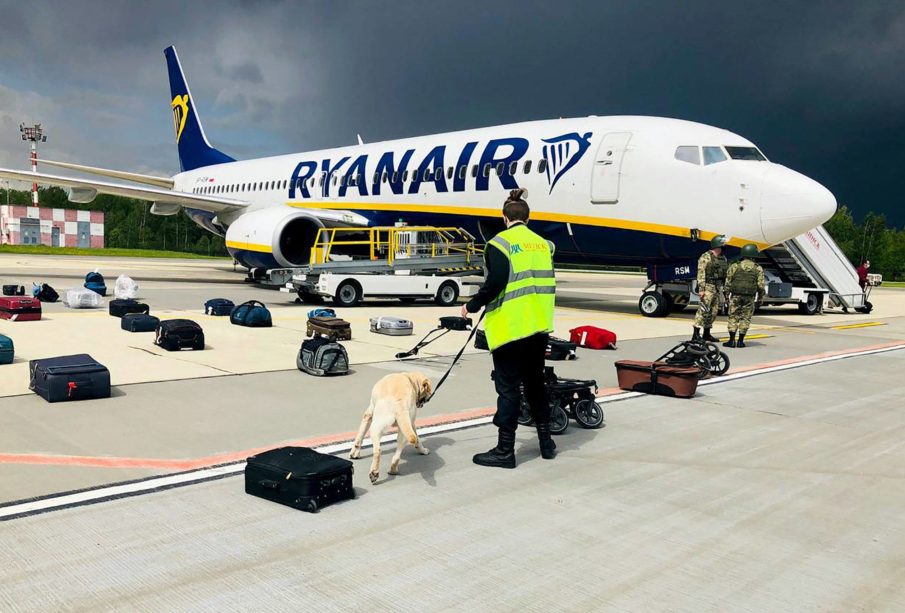 A Belarusian dog handler checks luggages off a Ryanair Boeing 737-8AS (flight number FR4978) parked on Minsk International Airport's apron in Minsk, on May 23, 2021. (Photo by - / ONLINER.BY / AFP)

Belarusian authorities scrambled a fighter jet and flagged what turned out to be a false bomb alert to force a Ryanair plane to land on Sunday and then, detained an opposition-minded journalist, who was on board, drawing condemnation from Europe and the United States.

In what was described by some EU leaders as a hijacking, the passenger plane flying from Athens to Lithuania was suddenly diverted to Minsk, the capital of Belarus, escorted there by a Soviet-era MiG-29 fighter jet. On its landing, authorities took journalist Roman Protasevich into custody.

Protasevich had his head in his hands and was shaking when he realised the flight was headed for Minsk, Lithuania’s Delfi news outlet said, quoting a passenger. Later, as he was led away, according to the report, he remarked: “I’ll get the death penalty here.” The report could not be verified.

The 26-year-old journalist worked for Poland-based online news service NEXTA, which broadcast footage of mass protests against Belarusian President Alexander Lukashenko last year via the Telegram messenger app at a time when it was hard for foreign media to do so.

Protasevich, who now works for a different Telegram channel called Belamova, is wanted in Belarus on extremism charges and stands accused of organising mass riots and of inciting social hatred, allegations he denies.

Data from the flightradar24.com website showed the plane was diverted just two minutes before it was due to cross into Lithuanian airspace. After seven hours on the ground, the plane took off and finally landed in Vilnius where Lithuanian Prime Minister Ingrida Simonyte was waiting to meet the passengers.

As European officials threatened new sanctions on Belarus, US Secretary of State Antony Blinken called the forced landing and arrest a ‘shocking act’, demanded Protasevich’s immediate release and said President Joe Biden’s administration was ‘coordinating with our partners on next steps’.

EU member state Lithuania, where Protasevich is based, urged the European Union and NATO to respond.

Ursula von der Leyen, head of the EU’s executive European Commission, said Protasevich must be released immediately and that those responsible for ‘the Ryanair hijacking must be sanctioned’, adding EU leaders meeting in Brussels on Monday would discuss what action to take.

NATO Secretary-General Jens Stoltenberg said in a tweet that the incident was serious and dangerous and required an international investigation.

Simon Coveney, foreign minister of Ireland, where Ryanair is based, said on Twitter: “EU inaction or indecision will be taken as weakness by Belarus.”

Meanwhile, Lithuanian prosecutors also launched a criminal investigation into the forced landing of a Ryanair flight to Vilnius in Minsk, the General Prosecutors office said in a statement on Sunday.

The charges under investigation include hijacking of a plane for terrorism purposes and treatment of humans in violation of international treaties, it said in the statement.

The United States along with the EU, Britain and Canada have already imposed asset freezes and travel bans on almost 90 Belarusian officials, including Lukashenko, following an August election that opponents and the West say was a sham.

US Senate Foreign Relations Committee Chairman Bob Menendez issued a statement with the heads of seven European parliamentary foreign affairs panels denouncing the forced landing as ‘an act of piracy’. They called for a ban on all overflights of Belarus, including to and from the country, and for NATO and EU states to impose sanctions and suspend Belarus’ ‘ability to use Interpol’.

Blinken demanded a ‘full investigation’ of an action he said endangered the lives of the passengers, including US citizens.

“Given indications the forced landing was based on false pretenses, we support the earliest possible meeting of the Council of the International Civil Aviation Organization to review these events,” he said in a statement.

ICAO said it was ‘strongly concerned’ over the incident, which might have breached the Chicago Convention underpinning civil aviation. Global airline industry body IATA also called for a full investigation.

The incident is certain to worsen already dire relations between the West and Belarus, which has been tightly controlled since 1994 by Lukashenko.

Opponents accuse him of rigging a presidential election in his own favour last year and of then cracking down violently on the opposition. He denies electoral fraud.

Ryanair said in a statement that the plane`s crew was notified by Belarus of a potential security threat on board and was instructed to divert to the nearest airport, Minsk.

The plane landed safely, passengers were offloaded, security checks were made by local authorities and the aircraft later resumed its journey to Vilnius, Ryanair said.

One of the passengers, speaking to Reuters after arriving at Vilnius airport, said neither the pilot nor the crew gave a full explanation for the sudden diversion to Minsk, but Protasevich reacted quickly to the news, standing up from his seat.

The Lithuanian passenger, who gave his name only as Mantas, said Protasevich opened an overhead locker, pulled out a laptop computer and a phone and gave them to a female companion. On landing, Protasevich was immediately separated, Mantas said.

Belarusian officials with sniffer dogs searched the luggage of each passenger, including Protasevich, but appeared to find nothing. “It looked fake,” Mantas said of the bomb-detection operation.

Lithuanian President Gitanas Nauseda told a news conference late on Sunday that Protasevich`s female companion had also not re-embarked on the flight from Minsk to Vilnius.

Belarusian news agency BelTA reported that Lukashenko had personally ordered the warplane to escort the Ryanair plane to Minsk. No explosives were found, it said.

Ben Hodges, former commander of US Army forces in Europe, said the air defenses of Belarus were closely integrated with those of Russia. “If you had anything happening in the Belarus airspace, it would be impossible for the Kremlin – or at least Russian military forces – not to know about it,” he said.

Nauseda urged “NATO and EU allies to immediately react to the threat posed to international civil aviation by the Belarus regime.”

Lithuanian presidential adviser Asta Skaisgiryte said the operation to force the plane carrying around 170 people from 12 countries to land seemed to be pre-planned.

The Belarusian department for organised crime control reported that Protasevich had been detained, before deleting the statement from its Telegram channel.

About 35,000 people have been detained in Belarus since August, human rights groups say. Dozens have received jail terms.

Italian cable car plunges to the ground, killing at least 9