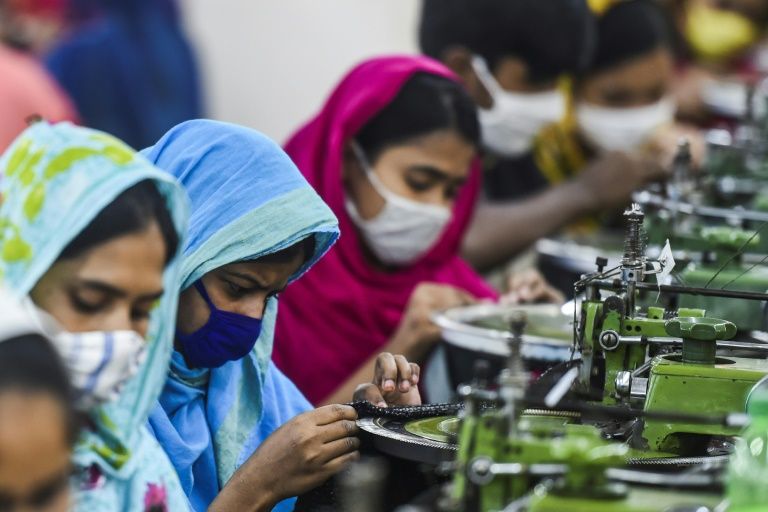 Big-name international brands have cancelled or held up billions of dollars in orders due to the pandemic, crippling an industry that accounts for over nearly all of Bangladesh's export earnings (AFP Photo/Munir UZ ZAMAN)

Hundreds of Bangladesh garment factories defied a nationwide coronavirus lockdown to reopen on Sunday, raising fears the industry’s vulnerable and largely female workforce could be exposed to the contagion.

Big-name international brands have cancelled or held up billions of dollars in orders due to the pandemic, crippling an industry that accounts for over nearly all of the South Asian country’s export earnings.

Factories shut their doors in late March but some suppliers said they were now being pushed by retailers to fulfill outstanding export orders.

“We have to accept coronavirus as part of life. If we don’t open factories, there will be economic crisis,” said Bangladesh Knitwear Manufacturers and Exporters Association vice president Mohammad Hatem.

He said his MB Knit company had reopened part of a factory that makes clothing for Britain’s Primark and several other retailers.

Factories were “under pressure” from brands to meet export deadlines and feared the risk that billions in orders could be diverted to competing operations in countries like Vietnam or China, Hatem added.

More than four million people work in thousands of garment factories across Bangladesh, which last year shipped out $35 billion of apparel to retailers such as H&M, Inditex and Walmart last year — second only to China.

Hundreds of those factories had resumed operations over the weekend in the industrial areas of Gazipur and Ashulia, just outside the capital Dhaka.

Some 200,000 workers were likely back at work just in Ashulia, police spokeswoman Jane Alam told AFP.

Mofazzal Hossain said he felt compelled to return to his factory, where he earns $115 a month.

“The fear of coronavirus is there,” he told AFP.

“But I am now more worried about losing my job, wages and benefits.”

Labour rights leaders said they were fearful the return to work could spark an explosion of COVID-19 cases.

“Its impact could be worse than Rana Plaza,” said activist Kalpona Akter, referring to the collapse of a garment factory complex in 2013 that killed 1,130 workers.

Bangladesh, a nation of 168 million people, has almost 5,500 confirmed COVID-19 infections and 145 deaths according to the government.

Experts say the real number is likely much higher due to a lack of patient testing by authorities.