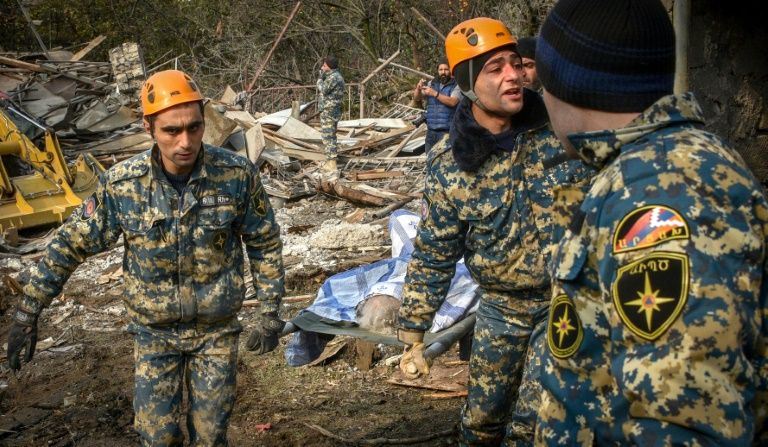 Rescuers carry the body of a woman killed by shelling in Karabakh capital Stepanakert on Friday. AFP

Azerbaijan said Sunday its forces had captured the key town of Shusha from Armenian separatists in Nagorno-Karabakh, but Armenia insisted that fighting for the strategically vital area was ongoing.

The capture of Shusha would be a major victory for Azerbaijan six weeks after new fighting erupted over Nagorno-Karabakh, an ethnic Armenian enclave that broke away from Azerbaijan’s control in the 1990s.

The fortress town sits on cliffs around 15 kilometres (nine miles) from Nagorno-Karabakh’s main city Stepanakert and on the main road through the region to the territory of Armenia, which backs the separatists.

Both sides have reported fierce clashes around the town in recent days, after Azerbaijani forces swept across the southern flank of Nagorno-Karabakh and pushed through its mountain passes.

In a televised address to the nation on Sunday, Azerbaijani President Ilham Aliyev announced that the town had been captured.

“With great pride and joy, I inform you that the town of Shusha has been liberated,” said Aliyev, dressed in military fatigues and standing in front of an Azerbaijani flag.

He said November 8 would “go down in the history of the Azerbaijani people” as the day “we returned to Shusha”.

“Our liberation march continues. We will go to the end, until the complete liberation of the occupied territories,” Aliyev said.

Flag-waving Azerbaijanis took to the streets of the capital Baku to celebrate after Aliyev’s announcement.

Armenian officials confirmed there were heavy clashes for the town but said the battle was far from over.

“The fighting continues in Shushi, wait and believe in our army,” Armenian defence ministry official Artsrun Hovhannisyan said, using the Armenian name for the town, shortly after Aliyev’s announcement.

Armenian defence ministry spokeswoman Shushan Stepanyan said there was “the most ferocious combat” overnight for the town, while the Armenian government said taking Shusha was an “unattainable pipe dream for Azerbaijan”.

“Despite heavy destruction, the fortress city withstands the blows of the adversary,” it said.

The new clashes broke out in late September between Azerbaijan and the Armenia-backed separatists over control of Karabakh, which declared its independence nearly 30 years ago.

That declaration has not been recognised internationally, even by Armenia, and it remains a part of Azerbaijan under international law.

The recent flare-up has been the worst in decades, with more than 1,000 people confirmed dead including dozens of civilians, although the death toll is believed to be much higher.

Fighting has continued despite several attempts by Russia, France and the United States to help reach a lasting ceasefire.

The three countries make up the “Minsk Group” of mediators that helped broker a truce between the ex-Soviet rivals in 1994 but have failed to find a lasting solution to the long-simmering conflict.

Armenia and Azerbaijan have each accused the other of targeting civilian areas during the fighting and the United Nations this week decried indiscriminate attacks that could amount to “war crimes”.

The fighting has raised fears that both Russia, which has a military alliance with Armenia, and Azerbaijan’s ally Turkey could be further drawn into the conflict.