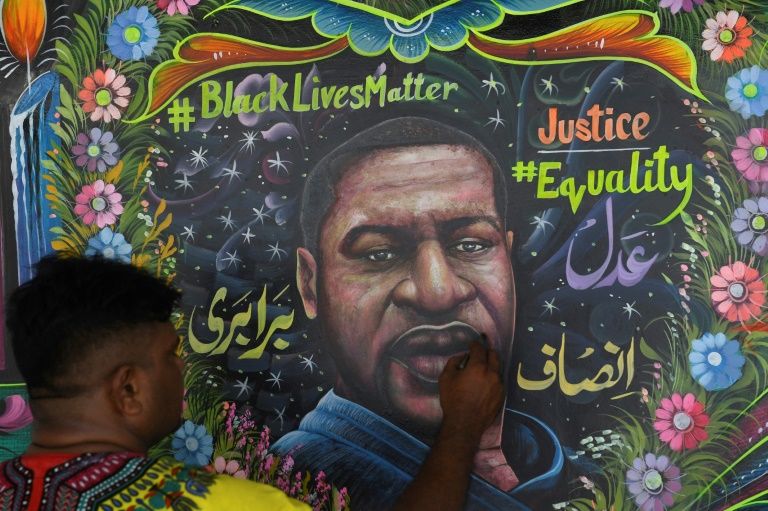 A Pakistani artist puts the final touches on a mural of George Floyd, the African American whose killing by a white police officer has ignited protests against racism around the world (AFP Photo/Asif HASSAN)

The police chief in the US city of Atlanta resigned after an officer fatally shot a black man during an arrest, the mayor said Saturday, with the new killing injecting fresh anger into protests against racism and police brutality.

Images on local media showed hundreds of protesters in the streets on Saturday and flames engulfing a Wendy’s restaurant where 27-year-old Rayshard Brooks was killed.

The officer who shot Brooks was dismissed Saturday and identified by Atlanta police as Garrett Rolfe. The second officer was placed on administrative duty, according to ABC News.

In televised comments made earlier in the day, Mayor Keisha Lance Bottoms said that Shields, with more than two decades of experience in the force, “has offered to immediately step aside as police chief.”

Demonstrators were out on the streets before night fell Saturday, with one group blocking a highway near the Wendy’s restaurant and facing off with police.

Dozens of protesters were arrested, CNN quoted the Atlanta police as saying.

The unrest comes as the US faces a historic reckoning on systemic racism, with mass civil unrest ignited by the May 25 killing of another African-American man, George Floyd, while in police custody.

Floyd died after a white Minneapolis police officer knelt on his neck for nearly nine minutes.

Protests which spread first around the country then the globe, have forced a conversation on the legacies of slavery, colonialism and white violence against people of color, as well as the militarization of police in America.

Georgia has been hit hard by these protests. A black man, Ahmaud Arbery, was killed in the state’s southwest by one of three white men who chased him down in pickup trucks while he was out jogging in February.

Wendy’s employees called police on Friday night to complain that Brooks was asleep in his car and blocking other customers on the premises, an official report said.

He failed a sobriety test and resisted when police tried to arrest him, the Georgia Bureau of Investigation (GBI) said.

Surveillance video showed “that during a physical struggle with officers, Brooks obtained one of the officer’s Tasers and began to flee from the scene,” the report continued.

“Officers pursued Brooks on foot and during the chase, Brooks turned and pointed the Taser at the officer. The officer fired his weapon, striking Brooks,” it said.

Brooks was taken to hospital but died after surgery, it said, adding that one officer was injured.

An attorney acting for the dead man’s family said disproportionate force was used in the confrontation.

“In Georgia a Taser is not a deadly weapon — that’s the law,” L. Chris Stewart told reporters.

“Support came, in I think two minutes. He would have been boxed in and trapped. Why did you have to kill him?”

“(The officer) had other options than shooting a man in the back.”

Brooks has four children, Stewart added, and had celebrated the birthday of his eight-year-old girl earlier on Friday.

His death is the 48th shooting involving an officer that the GBI has been asked to investigate this year, according to local newspaper the Atlanta Journal-Constitution. Fifteen of those incidents were fatal.

“I watched this on the internet, from the whole George Floyd situation to coming together like we’re doing,” said Brooks’ cousin, Decatur Redd, clearly shaken.