At least 83 killed in fighting in Sudan’s Darfur 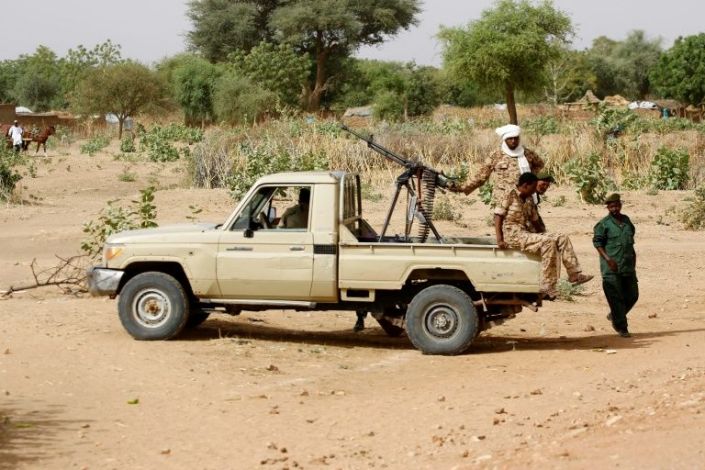 Heavy fighting in Sudan's Darfur has seen over 80 people killed; this photo from April 2016 shows a convoy of Sudanese security forces in El Geneina. AFP

Over 80 people have been killed in two days of ongoing clashes in Sudan’s restive Darfur, doctors said Sunday, just over two weeks since a long-running peacekeeping mission ended operations.

The violence is the most significant fighting reported since the signing of a peace agreement in October hoped to end years of war in the vast western region, that has left Darfur awash with weapons.

The violence has reportedly pitted non-Arab and Arab tribes in El Geneina, the capital of West Darfur state.

It was reported to have initially started as a local dispute, before quickly morphing into broader fighting involving armed militias.

“The death toll from the bloody events that occurred in El Geneina, the capital of West Darfur State, has risen since Saturday morning … to 83 dead, and 160 wounded including from the armed forces,” the Central Committee of Sudan Doctors said.

Sudanese authorities have imposed a state-wide curfew in West Darfur, while the Khartoum government dispatched a “high-profile” delegation to help contain the situation.

Citing the doctors’ union, the state-run SUNA news agency said that casualties are expected to increase as the fighting continues.

The union’s local branch also “called for the securing of health facilities” and urged transport be made available for medics to assist the wounded.

“Parts of Kerindig camp were burned, and sustained significant damages forcing people to leave for safe areas,” it said in a statement.

“These events showed that the spread of weapons across Sudan, and especially in Darfur, are the main reasons for the deteriorating situation.”

On December 31, the hybrid United Nations African Union Mission in Darfur (UNAMID) formally ended its operations in the region, 13 years after it came into being.

It plans a phased withdrawal of its approximately 8,000 armed and civilian personnel inside six months.

The Sudanese government “will take over responsibility for the protection of civilians” in Darfur, UNAMID said, as its mandate ended.

Also in late December, clashes in South Darfur state left at least 15 people dead and dozens wounded, prompting the government to send troops to the area.

Darfur was the scene of a bitter conflict that erupted in 2003, leaving around 300,000 people dead and 2.5 million displaced, the United Nations says.

The fighting erupted when ethnic minority rebels rose up against the Arab-dominated government in Khartoum, which responded by recruiting and arming a notorious Arab-dominated militia known as the Janjaweed.

The violence often centres on land ownership and access to water.

Bashir, who is currently in custody in Khartoum, is wanted by the International Criminal Court for alleged genocide and war crimes in Darfur perpetrated more than a decade ago.

The transitional government, a power sharing arrangement comprised of generals and civilian figures, signed in October a peace agreement with rebel groups in Sudan’s main conflict zones, including Darfur.

But two rebel groups refused to join a recent peace deal, including the Sudan Liberation Movement (SLM) faction led by Abdelwahid Nour, which is believed to maintain considerable support in Darfur.

The Sudanese Professionals Association said the violence in West Darfur shows the “deficiencies” of the peace deal.

The deal, it added, “strayed away from addressing the roots of the crisis in Darfur, and the issues of people who suffered the scourge of war, and the spread of weapons”.