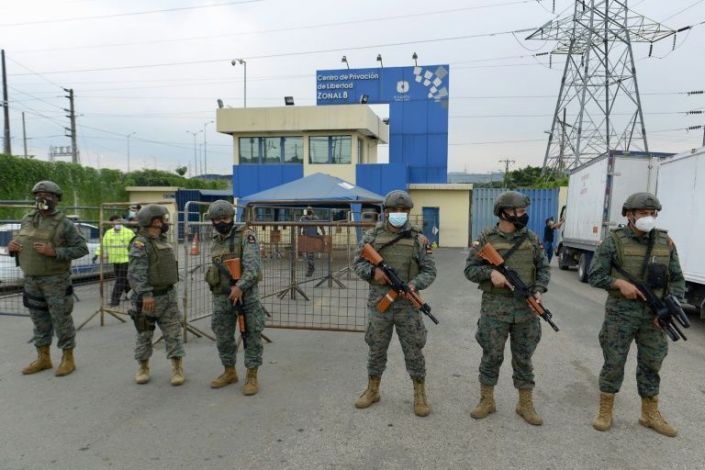 Security forces guard a prison in Ecuador, where dozens of inmates died in riots. AFP

The national police said on Twitter the death toll stood at “more than 50” prisoners after unrest at facilities in the provinces of Guayas, Azuay and Cotopaxi.

The authorities, he said, “are acting to retake control.”

The police did not state whether order had been restored after violence broke out at prisons in the port city of Guayaquil in the southwest, and at Cuenca and Latacunga in the Andes.

Police commander Patricio Carrillo reported unrest at several prisons in the South American nation, and said “the situation is critical.”

Interior Minister Patricio Pazmino, meanwhile, tweeted that a centralised command post has been set up to respond to what he said was “concerted action by criminal organizations to generate violence in penitentiary centres.”

A 90-day state of emergency in the country’s jails, ordered by Moreno to bring “mafia” groups under control in a bid to reduce violence, was lifted in November.

There are some 38,000 prisoners in Ecuador, a country of 17 million people.

Inmate disputes left 51 dead in 2020, according to police.

In order to reduce prisoner numbers amid the coronavirus epidemic, the government commuted the sentences of people convicted of minor offences, reducing overcrowding from 42 percent to 30 percent.