The Times of Earth, International Edition
0
202 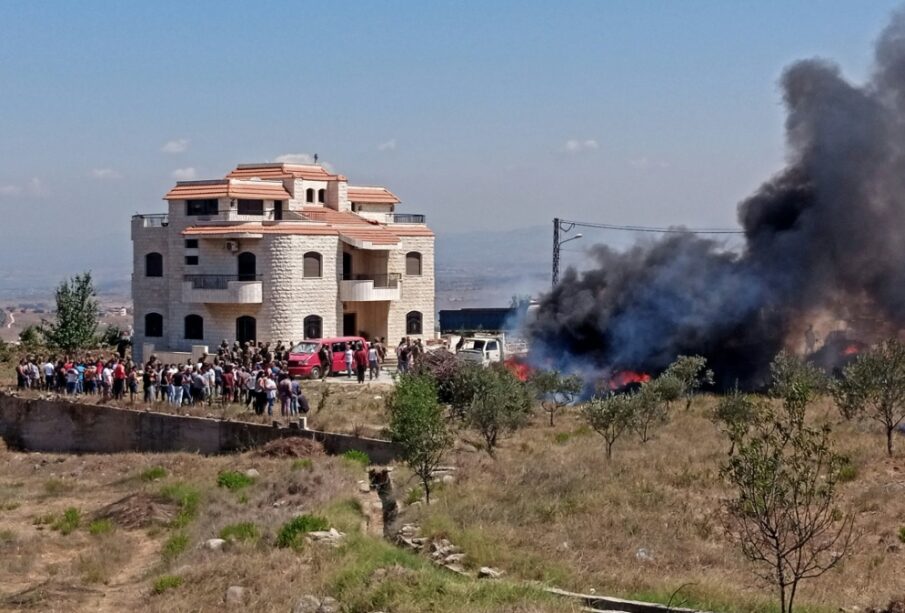 People gather outside the reported home of the lot owner, where the fuel tank exploded, in the village of Tlel in Lebanon's northern region of Akkar. — © AFP

At least 28 people were killed and nearly 80 others injured when a fuel tank exploded in northern Lebanon on Sunday, authorities and medics said, scalding a crowd that was clamouring for gasoline in the crisis-hit country.

The night-time tragedy overwhelmed medical facilities and heaped new misery on a nation already beset by an economic crisis and severe fuel shortages that have crippled hospitals and caused long power cuts.

It revived bitter memories of an enormous explosion at Beirut port in August last year that killed more than 200 people and destroyed swathes of the capital.

An adviser to the health ministry said the death toll from the blast in Al-Tleil village, in the remote northern region of Akkar, had climbed to 28, while the Lebanese Red Cross earlier put the number of wounded at 79.

The military said a fuel tank that “had been confiscated by the army to distribute to citizens” exploded just before 2:00 am (2300 GMT), leaving soldiers also among the wounded.

The official National News Agency   (NNA) said the blast followed scuffles between “residents that gathered around the container to fill up gasoline” overnight.

Hospitals in Akkar, one of Lebanon’s poorest regions near the border with Syria, and in the northern port city of Tripoli said they had to turn away many of the injured because they were ill-equipped to treat severe burns.

“The corpses are so charred that we can’t identify them,” said Yassine Metlej, an employee at a Akkar hospital where seven bodies and dozens of injured were brought.

“Some have lost their faces, others their arms,” Metlej told AFP.

The head of Lebanon’s High Relief Council (HRC), Mohammad Kheir, said authorities were “in contact with Turkey and Egypt to transfer the most serious cases abroad”, according to NNA.

“This is a real catastrophe, like the Beirut explosion,” he said.

Unable to seek treatment in Akkar, Ismail al-Sheikh, 23, who sustained burns to his arms and legs, was driven by his sister Marwa to the Geitawi hospital in Beirut.

“At night, we were informed that the army was distributing gasoline… so people flocked to fill it in plastic containers… straight from the tank,” Marwa told AFP.

“Most of the people who were there said that someone had thrown a lighter on the floor” causing a fire that sparked the explosion, she added.

Other eyewitnesses claimed that shots were fired before the blast.

Grief and anger filled the corridors outside the emergency rooms.

“What am I going to tell my sister?!” said a man in military uniform whose brother-in-law has been reported missing and brother hospitalised.

Lebanon, hit by a financial crisis branded by the World Bank as one of the planet’s worst since the 1850s, has been grappling with soaring poverty, a plummeting currency and dire fuel shortages.

Central bank governor Salameh said last Wednesday the lender cannot afford to fund fuel subsidies due to dwindling foreign reserves, and accused importers of hoarding fuel to sell it at higher prices on the black market or in Syria.

Fuel shortages have left many with just two hours of electricity a day, while several hospitals have warned they may have to close due to power outages.

The American University of Beirut Medical Centre, the country’s top private hospital, said it would close by Monday morning if it doesn’t secure diesel to power generators, risking hundreds of lives.

President Michel Aoun called for an investigation into the blast and ordered an emergency meeting of Lebanon’s defence council later Sunday, his office said.

At the blast scene, soldiers and rescuers swept the area to search for missing people, as relatives gathered in anguish, state media said,

The Akkar explosion comes less than two weeks after Lebanon marked the first anniversary of the Beirut port blast.

Despite the economic crisis, political wrangling has delayed the formation of a new government after the last cabinet resigned in the wake of the port blast.

International donors have pledged hundreds of millions of dollars in humanitarian aid, but the funds remain contingent on a new government being formed to spearhead reforms, and on talks restarting with the International Monetary Fund.