The Times of Earth, International Edition
0
340 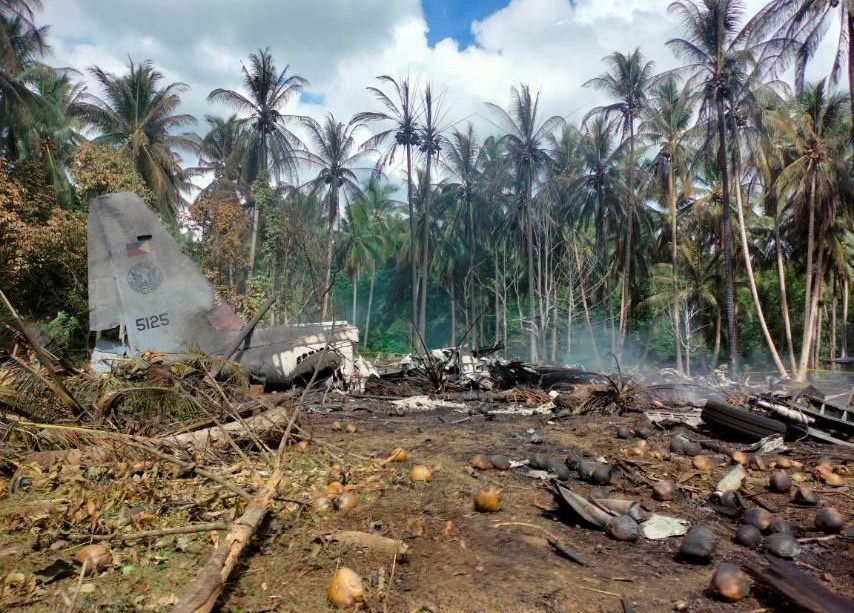 At least 17 people were killed when a Philippines Air Force plane carrying troops crashed on landing in the south of the country and broke up in flames on Sunday, the country’s worst military air disaster in nearly 30 years.

The Lockheed C-130 transport aircraft crashed at Patikul in Sulu province, in the far south of the archipelago nation where the army has been fighting a long war against Islamist militants from the Abu Sayyaf and other factions.

Seventeen bodies had been recovered and 40 injured had been rescued so far, Defence Minister Delfin Lorenzana said in a statement. Most of the 92 people aboard were troops flying from Laguindingan Airport, some 460 km (290 miles) to the northeast.

Pictures from the scene showed flames and smoke pouring from wreckage strewn among trees as men in combat uniform milled around. A large column of black smoke rose from the coconut palms into the blue sky.

A military spokesman, Colonel Edgard Arevalo, said there was no indication of any attack on the plane, but that a crash investigation had not begun and efforts were focussed on rescue and treatment.

Sobejana said in a message to Reuters that the plane had crashed a few kilometres (miles) from Jolo airport at 11:30 a.m. (0330 GMT) and had been carrying troops.

“We are currently attending to the survivors who were immediately brought to the 11th Infantry Division station hospital in Busbus, Jolo, Sulu,” he said.

The Lockheed C-130H Hercules aircraft, registration 5125, had only arrived in the Philippines recently.

It was one of two aircraft granted by the U.S. government through the Defense Security Cooperation Agency, according to a government website announcement in January. It quoted an air force spokesman as saying the aircraft would provide enhanced capability for heavy airlift missions.

The website C-130.net said the plane that crashed had first flown in 1988. The model is a workhorse for armed forces around the world.