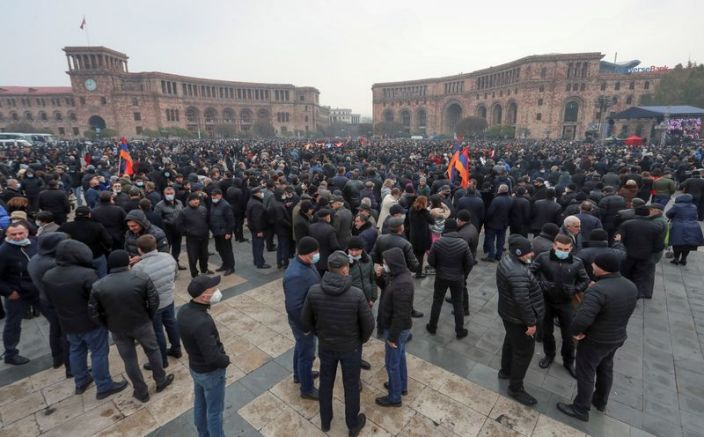 Hundreds of opposition supporters set up a protest camp outside Armenian government headquarters in central Yerevan on Tuesday, escalating a campaign against Prime Minister Nikol Pashinyan.

His opponents demand that he resign over what they say was his mishandling of a bloody six-week conflict over the Nagorno-Karabakh enclave and surrounding areas which ended with a Russian-brokered truce and big territorial gains for Azerbaijan.

Opposition groups had threatened to launch a national strike on Tuesday and, as Armenian police looked on, protesters waving Armenian flags set up four tents outside government headquarters.

“We’ve already set up tents, we intend to stay as long as we have to, including sleeping here. Pashinyan must resign,” Ishkhan Saghatelyan, an opposition politician, was quoted by TASS news agency as saying.

On Saturday, thousands of Armenians led by Pashinyan marched through the capital to its Yerablur military cemetery to commemorate soldiers killed in the conflict over the Nagorno-Karabakh enclave.

Although his supporters filled the cemetery to its brink, footage published on Armenian television showed Pashinyan’s critics shouting “Nikol is a traitor!” as his convoy passed by, escorted by heavy security.

Pashinyan, who swept to power in a peaceful revolution in May 2018, has rejected calls to resign.