Anguish and anger in Serbia as virus returns with a vengeance 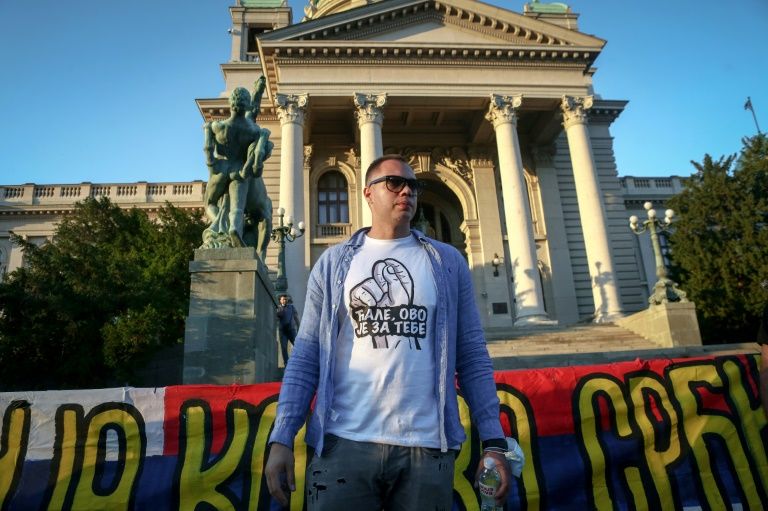 When Petar Djuric arrived with fruit and water for his father at the hospital in April, he learned it was too late. For this loss, he blames the collapse of Serbia’s health system just as much as the coronavirus.

“Pops, this is for you,” the bleary-eyed 31-year-old told a local TV channel as he joined protests that erupted last week over the Serbian government’s handling of the health crisis.

The words became a rallying cry for those outraged at leaders accused of toying with the health of citizens for political purposes.

After flattening its first curve of infections by May, Serbia is now reporting its deadliest days yet.

Hospitals are overstretched with more than 300 new cases reported daily, putting a record number of around 170 patients on ventilators.

Djuric, a basketball coach, became a symbol of anger among protesters who accuse the government of lifting an initial lockdown prematurely in order to hold an election that tightened the ruling party’s grip on power.

After his father came down with a high fever and cough in late March, “we called the COVID-19 call centre every day. They told us to wait, not to come to the hospital,” Djuric, who finally drove his father to the hospital himself, told AFP.

On April 9, a doctor recommended the 71-year-old painter be transferred to a ward for respiratory assistance, according to his son.

But in the hospital in Zemun, a neighbourhood of the capital Belgrade, “no ventilator was available at the time,” Djuric said.

A few days later, his father was gone.

“I think the doctors did their best. But apparently the system does not work. My father told me the situation was catastrophic,” he added.

President Aleksandar Vucic — the target of protesters’ anger — responded to Djuric in a nationally televised address, calling the story a “lie”, while pro-government tabloids launched their own attacks.

Officially, nearly 420 people have died in the country of seven million.

But protesters accuse the authorities of covering up the true death toll, an allegation first levied by a local investigative outlet.

Members of a government crisis team recently admitted that the actual death count is “almost certainly” higher because some patients who died “didn’t get the chance to be tested”.

Stana, a 50-year-old Belgrade native who declined to give her surname, told AFP she is convinced her father-in-law falls in that category.

She believes he died of the respiratory disease but was not counted in the official COVID-19 figures because he could not be tested in time.

Experiences like this helped fuel the frustration of protests that started on July 7, several of which ended in violent clashes with police.

“We are fed up with the manipulation of COVID-19 figures,” Danijela Ognjenovic, a 52-year-old protester, told AFP.

“No one trusts any information coming from the government at this point,” added Branko Jovanovic, 44.

President Vucic claims the country has “a health system that is better than that of nine European Union countries”.

But some frontline doctors disagree.

While Serbia’s medical care was once highly respected — a legacy of the socialist Yugoslav era — the health system has been deteriorating for decades.

Like other sectors, the medical industry has suffered from a huge exodus of young professionals moving abroad for better pay in places like Germany.

A nurse earns on average 400 euros ($455) a month in Serbia, while a specialist doctor can make just over 800 euros, according to data from doctors’ unions.

The country now lacks some 3,500 doctors and 8,000 nurses, according to the economic news portal novaekonomija.rs.

A doctor working in one of Belgrade’s dedicated COVID-19 wards told AFP he believed initial health measures were dropped too early, allowing President Vucic to campaign on a victory against the virus ahead of the June 21 parliamentary elections that cemented his party’s domination.

“Until the last moment, the existence of danger was denied, even when it was obvious,” he told AFP on the condition of anonymity.

“There was no preparation” before the second wave, in order to “create the image of a system (that) works,” he said.

“The situation was bad two weeks ago, now it’s even worse.”

After years of violence, a Kenyan village enjoys precious peace