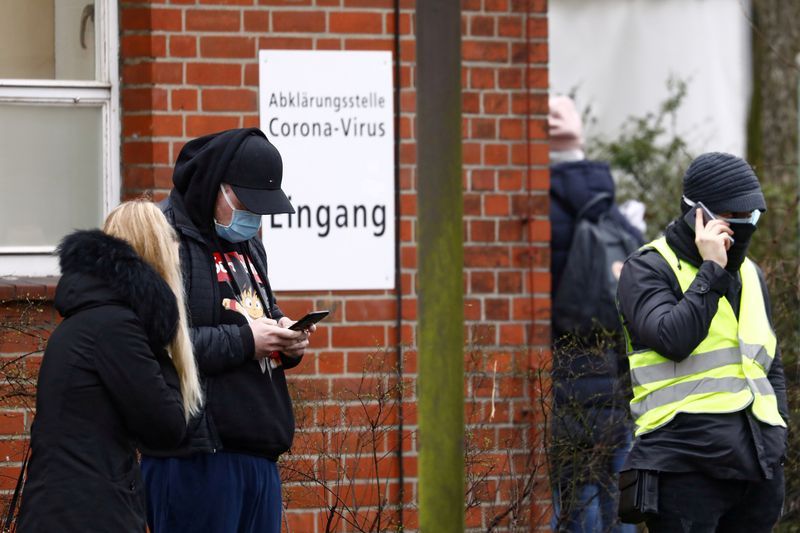 Clearing up centers on coronavirus opens in Berlin. Reuters

German chancellor Angela Merkel has warned that up to 70% of the German population was likely to be infected with the coronavirus.

“It is here,” Merkel said at a press conference in Berlin on Wednesday, noting that the government would “do whatever is necessary” to protect the economy from the fallout of the coronavirus.

Germany currently has 1,565 confirmed cases, and three deaths from coronavirus.

Asked if she could envisage relaxing Germany’s famous “black zero” zero-deficit law to allow for increased borrowing, the chancellor indicated that she would be open to it, but noted it the priority for now was ending the virus.

Germany’s top economists this morning released a paper asking the government to take speedy, temporary measures to protect Europe’s biggest economy from the financial impact of the virus outbreak. They demanded that Berlin should consider tax cuts, state participation in companies, and temporarily abandoning its debt-free budget law.

Speaking alongside German health minister Jens Spahn and Lothar Wieler from the Robert Koch Institute, which is leading Germany’s coronavirus research and response, Merkel said EU leaders had agreed on a video-conference on Tuesday that the most important thing was to “slow the spread of the virus.”

The chancellor said that since there is no vaccination or therapy against the virus, the focus must be “winning time” to slow it down. She added that it was key to protect the old and chronically ill, and make sure the health system does not become overloaded.

‘At the start of an epidemic’

“We are at the start of an epidemic”, Wieler said, emphasising that slowing the spread of the virus was critical. He said that the number of cases and deaths from the virus would definitely rise in Germany, and that a vaccination cannot realistically be expected before 2021.

The health minister repeated his advice from earlier in the week, namely that people should “curtail their everyday lives a little,” by avoiding clubs, concerts, and other gatherings. The cities of Berlin and Hamburg announced this afternoon that all events with more than 1,000 people are now cancelled. Other states, including Bavaria and North Rhine-Westphalia, have also implemented similar restrictions.

Today in Berlin, Merkel advised that instead of shaking hands, people should “look into each other’s eyes for a second longer and smile.”

“Our solidarity, our reason, and our hearts are being put to the test,” she said. “My wish is that we pass the test.”