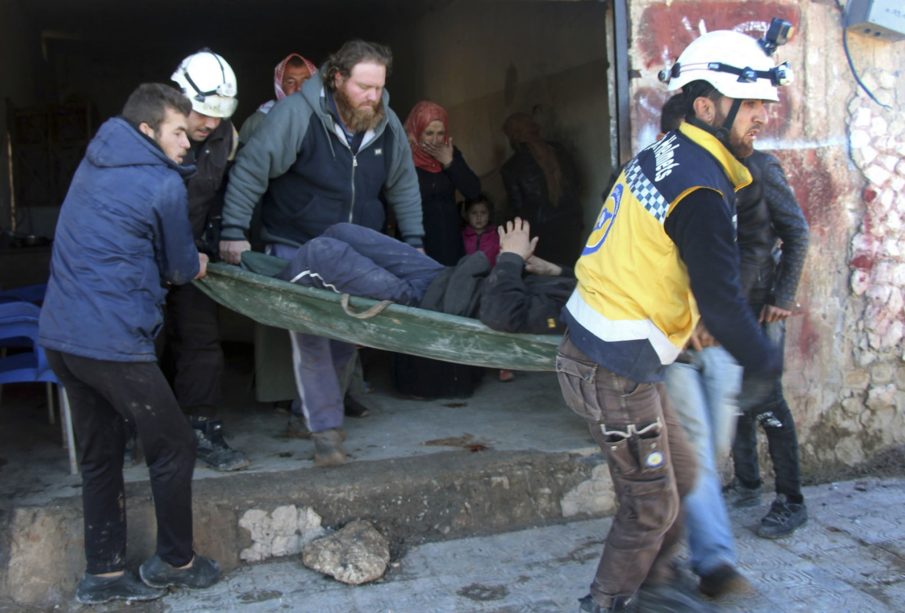 The objective appears to be reopening the main highway linking the capital, Damascus, with the northern city of Aleppo, Syria’s largest. Before the war began in 2011, Aleppo was the country’s commercial center.

The six family members killed Tuesday were hit by shelling in the village of Bdama, while four civilians died in an airstrike in the village of Maasaran, both in Idlib province. That’s according to an Idlib-based activist, Hadi Abdullah, as well as the Britain-based Syrian Observatory for Human Rights.

The shelling in Bdama killed the wife and three daughters of a relief worker with the opposition paramedic group Syrian Civil Defense, also known as the White Helmets.

Anwar Hamidi learned of their deaths after arriving with a relief team to his home, the sit of the bombardment, according to the White Helmets’ statement. Hamidi’s sister-in-law and the wife of his cousin were also killed in the shelling, the group said.

A video released by the paramedic group showed some of its members removing the bodies from inside the apartment and placing them in an ambulance as a man and a young boy sat weeping.

The Observatory said six other civilians were killed in an airstrike on the village of Talmanas. The Step news agency, an activist collective, said eight people were killed in the village. Different casualty figures are common in the immediate aftermath of attacks.

In August, after weeks of intense fighting, Syrian troops captured the town of Khan Sheikhoun in Idlib province.

The strategic M5 highway passes through Khan Sheikhoun but remains cut in Maaret al-Numan. The route has been closed by the rebels since 2012.

Thousands of Maaret al-Numan’s residents have fled in recent days amid intense airstrikes and shelling.

Syrian troops launched a four-month offensive earlier this year against Idlib, forcing hundreds of thousands of civilians to flee their homes.

A fragile cease-fire halted that advance at the end of August, but in recent weeks it has repeatedly been violated.