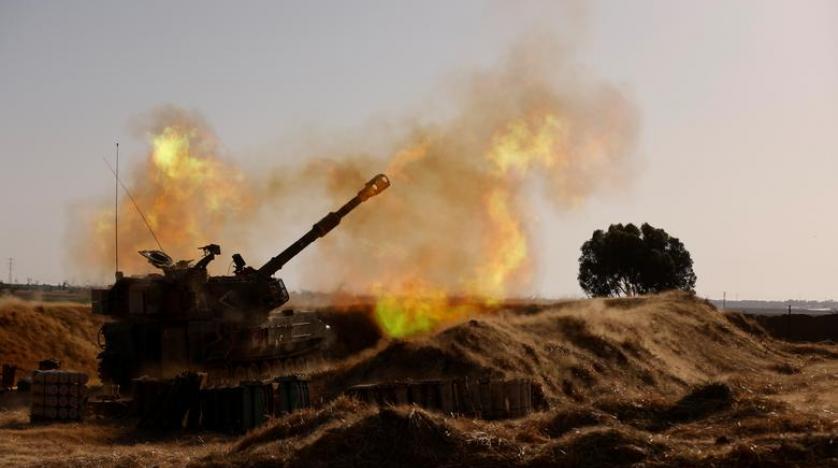 An Israeli mobile artillery unit fires near the border between Israel and the Gaza Strip, May 12, 2021. REUTERS/Amir Cohen

Israel pummelled Gaza with air strikes and Palestinian militants launched rocket barrages at Israel on Saturday, with no sign yet of an end to the worst escalation in years after six days of conflict and amid a rising death toll.

U.S. and Arab diplomats were seeking to calm the situation after a night of violence that saw militants fire about 200 rockets at cities in Israel, whose planes struck what it said were targets used by Hamas, the Islamist group that runs Gaza.

At least 136 people have been killed in Gaza since hostilities erupted on Monday, including 34 children and 21 women, with 950 others wounded, Palestinian medics said.

Israel has reported eight dead, including a soldier on the Gaza border and six civilians, two of them children.

Overnight, the Israeli bombardment killed at least 12 Palestinians in Gaza, medics said, including a woman and four of her children who died when their house in a refugee camp was hit. Three others died, with others wounded, the medics said.

In Israel, thousands of Israelis ran for shelter as sirens sounded. One rocket launched from Gaza struck a residential building in the southern Israeli city of Beersheba, police said. Media said some people were hurt in the town dashing to cover.

In Gaza, Akram Farouq, 36, dashed out of his home with his family after a neighbour told him they had received a call from an Israeli officer warning that their building would be hit.

“We haven’t slept all night because of the explosions, and now I am out in the street with my wife and children, who are weeping and trembling,” said the 36-year-old.

Israel’s military said its aircraft struck rocket launch sites and apartments that belonged to Hamas militants. It said one target had fired a rocket barrage at Jerusalem on Monday.

Regional and international diplomatic efforts have yet to show any signs of halting hostilities. Egypt, which has been leading regional efforts, sent ambulances across its border with Gaza to bring Palestinian casualties to Egyptian hospitals.

Palestinian casualties now extend beyond Gaza. Palestinians, who each year on May 15 mark their displacement in the 1948 war around Israel’s creation, have reported 11 killed in the occupied West Bank after protesters and Israeli forces clashed.

Hostilities between Israel and Gaza have been accompanied by violence in Israel’s mixed communities of Jews and Arabs. Synagogues have been attacked, Arab-owned shops vandalised and street fights have broken out. Israel’s president, who has a largely ceremonial role, has warned of civil war.

Egypt had been pushing for a ceasefire on Friday so talks could start, two Egyptian security sources said. Cairo has been leaning on Hamas and pressing others, such as the United States, to secure an agreement with Israel.

The Egyptian and Jordanian foreign ministers discussed efforts to end the Gaza confrontation and to prevent “provocations” in Jerusalem, Egypt’s Foreign Ministry said.

“The talks have taken a real and serious path on Friday,” a Palestinian official said. “The mediators from Egypt, Qatar and the United Nations are stepping up their contacts with all sides in a bid to restore calm, but a deal hasn’t yet been reached.”

The United Arab Emirates called on Friday for a ceasefire and talks, offering condolences to all victims. In September, the UAE and Bahrain became the first Arab states in a quarter century to establish formal ties with Israel.

Israel’s military said on Saturday about 2,300 rockets had been fired from Gaza at Israel since Monday, with about 1,000 intercepted by missile defences and 380 falling into the Gaza Strip.

Civil unrest between Jews and Arabs in Israel has dealt a blow to Israeli opposition efforts to unseat Prime Minister Benjamin Netanyahu after a series of inconclusive elections, raising the prospect of a fifth vote in just over two years.