The Times of Earth, International Edition
0
657 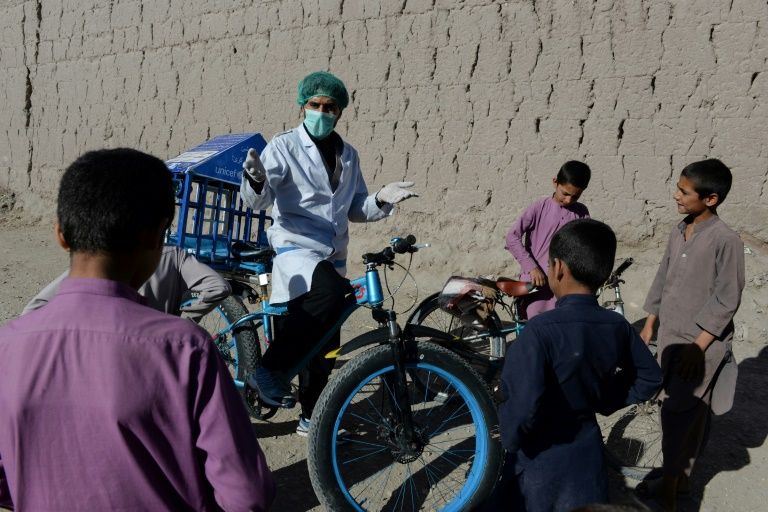 Afghan cyclist Idrees Syawash is determined to help curb the spread of the coronavirus so he pedals across rural areas encouraging people to wear masks and wash their hands.

“When coronavirus came to Afghanistan, I went to some villages and saw that people were not aware of it at all,” Syawash, 27, told AFP as he travelled across the eastern province of Nangarhar this week.

“I decided to use my bicycle… to launch a door-to-door awareness campaign.”

Afghanistan reported its first case of the virus in the western city of Herat in February and now has more than 8,600 confirmed infections, with the capital Kabul as its epicentre.

Authorities have imposed a nationwide lockdown since March to curb the spread, but that has not stopped Syawash, a resident of Afghanistan’s eastern Laghman province, from hitting the road.

He personally met with the governor of Nangarhar province to seek permission for his campaign in light of lockdown rules.

“The local government is supporting me because I am doing this work for a good cause,” Syawash said.

He has previously campaigned for wider educational opportunities in Afghanistan, also on his bicycle.

This time he travelled to more than 120 villages across often rough terrain, covering almost 1,000 kilometres.

His blue bike has a wooden box attached to it containing booklets that Syawash distributes to villagers with information on personal hygiene.

Wearing a mask, gloves and a white protective suit, he often stops at road intersections and village squares to brief residents about the pandemic, careful to keep two metres apart.

Children flock behind his bicycle while he performs a demonstration of how to wash your hands properly for 20 seconds.

“They don’t know, they are small, they are innocent,” Syawash said.

His campaign has taken him to some of the most remote parts of Afghanistan where there is often no electricity or internet.

Many villagers do not even acknowledge the virus exists, he said.

“If they don’t acknowledge it, they don’t follow the rules,” said Syawash.

Health officials also say the biggest challenge for Afghanistan is convincing people the illness is real and dangerous.

In Nangarhar, people had not heard of COVID-19 or the concept of social distancing until they met Syawash.

“We were greeting, we were hugging, we were sitting together,” said Rahim Gul, a local man, as he looked through a booklet given to him by the hygiene crusader.

“This man… told us not to, and to wash our hands with soap for 20 seconds.”

Syawash acknowledges that his family are worried about the risk of him contracting the virus.

“But that won’t stop me from helping people learn about the disease and ways to keep safe.”