The Times of Earth, International Edition
0
808 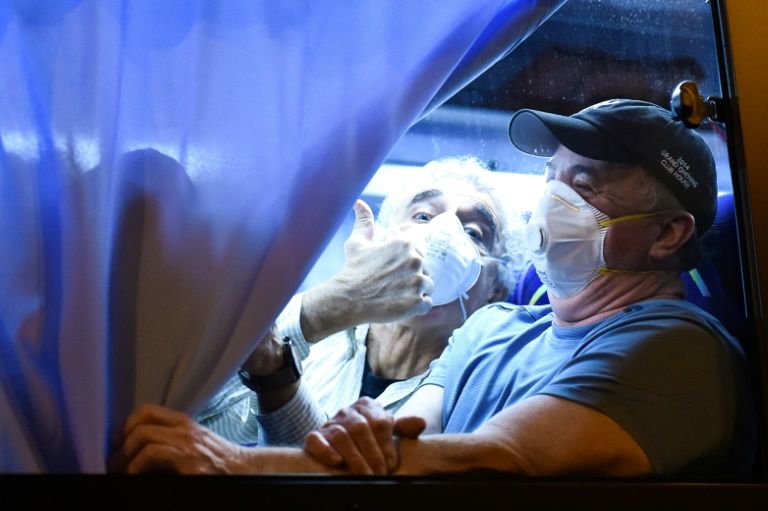 Forty Americans are among hundreds with the new coronavirus on a cruise ship quarantined off Japan, a US official said on Sunday, after other Americans on board left for chartered flights home.

The evacuation coincided with stepped-up warnings from Japanese authorities over the deadly outbreak, urging citizens to avoid crowds and “non-essential gatherings.”

The Diamond Princess was placed in a 14-day quarantine in early February after a former passenger tested positive for the COVID-19 virus.

But US authorities announced on the weekend they would offer American passengers the option to leave the ship and fly home, where they will face another 14-day isolation period. Several other governments also have announced plans to remove their citizens from the ship.-

More than three dozen Americans are not going home, however, Anthony Fauci, a senior official at the National Institutes for Health, said on CBS.

“Forty of them have gotten infected,” Fauci said. “They’re going to be in hospitals in Japan.”

It was not immediately clear whether the 40 Americans were among the figure of 355 people from the ship which Japanese Health Minister Katsunobu Kato earlier Sunday said were infected.

He said that 1,219 people on the vessel had been tested.

Late Sunday and into the early hours of Monday, Americans who opted to leave were brought off the ship in groups. They passed through a makeshift passport control but underwent no health checks, American passenger Sarah Arana told AFP.

They boarded buses driven by personnel in head-to-toe protective suits and were told that the more than a dozen vehicles would travel in a convoy.

“I am happy and ready to go,” Arana told AFP before leaving the ship. “We need a proper quarantine. This was not it.”

The US government should have intervened “much sooner, at the beginning,” the 52-year-old medical social worker said.

“This was too much for Japan, and they shouldn’t have had to bear the burden,” she added. “The people of Japan did not deserve this. I am full of gratitude.”

The US Centers for Disease Control and Prevention (CDC) said on Saturday that 400 Americans would be flown home.

Other Americans on board declined the evacuation, despite being warned they will still have to wait two weeks and test negative for the virus before being allowed back to the United States.

“My health is fine. And my two-week quarantine is almost over. Why would I want to be put on a bus and a plane with other people they think may be infected when I have spent nearly two weeks isolated from those people?” tweeted Matt Smith, an American lawyer on the ship with his wife.

He described a fellow American passenger standing on her balcony chanting “USA, USA” as buses arrived to collect them.

“Of course, in contravention of the rules of quarantine, she’s not wearing a face mask, and she’s talking with a passenger on the adjacent balcony… And you wanted me to get on a bus with her?”

Japan has not been able to test all those on board the ship due to limited supplies of testing kits, facilities and manpower, which are also needed by authorities tracking the spread of the virus on land.

Hong Kong also said it plans to charter a flight for 330 city residents on the ship. Canada announced a similar decision, and on Sunday Italy said it wants to quickly get its roughly 35 citizens off the ship.

“We will be next,” Italian Foreign Minister Luigi Di Maio said, adding a meeting is to be held on Monday to decide how to bring them back.

The death toll jumped to 1,665 in mainland China after 142 more people died from the virus. More than 68,000 people have now been infected.

In Japan, the number of new infections has continued to rise, with six new cases reported on Sunday, most of them in Tokyo. At least 59 cases have now been confirmed, including more than a dozen among the hundreds of Japanese nationals and their relatives repatriated from Wuhan, China, the epicentre of the outbreak.

With the rise in local infections, Kato warned the country was “entering a new phase.”

“We are seeing infection cases that we are unable to trace back their transmission routes,” he told reporters.

“We want to ask the public to avoid non-urgent, non-essential gatherings,” Kato added.

“I think it’s important that we exercise Japan’s collective strength.”